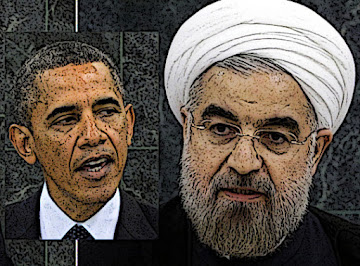 “I think it's a bad deal and I've said so for several weeks now. I think we need to put country ahead of party,” Senator Jim Webb said. "It troubles me when I see all this debate about whether this is disloyalty to the president or the Democratic Party.”

Webb is a Democrat and he joins a number of other Democrats in criticizing a bad deal that even Obama admitted will allow Iran to get nuclear weapons after a number of years.

Obama and his cronies have pursued an extraordinary campaign of vilification against Republicans and Democrats who dared to question the deal that will allow Iran to upgrade its nuclear program and obtain ICBM missiles, that will fund its terrorist activities around the world and even lift sanctions on terrorists like Anis Naccache, who engaged in nuclear proliferation, over European protests.

The apocalyptic rhetoric out of the White House is meant to shut down the debate. Threats of war and accusations of treason are not the language of an administration that is confident in its own arguments.

Democrats and Republicans have been accused of treason, of warmongering and of making common cause with Iranian leaders who chant “Death to America” by this administration and its allies. These accusations are hysterical, unhinged and contradict themselves. If you take them literally, Obama and his allies are accusing critics of both wanting war with America’s enemies and collaborating with them.

Elected officials who don’t want money going to terrorists are traitors. Anyone who doesn’t want to escalate the conflict in the region by enabling Iran’s arms buildup is a warmonger. And those who think that Obama’s deal with a regime that chants “Death to America” is flawed are aligned with the enemy.

There’s so much abuse coming out of the White House that its officials can’t even coordinate a coherent smear campaign that makes any kind of sense. Senator Schumer is being tarred as a chickenhawk traitor who voted for the Iraq War and secretly works for Israel, but Senator Webb is a Vietnam veteran who was wounded in the war and whose son served in Iraq, but who opposed the Iraq War.

Is he also a chickenhawk traitor or is Obama Inc. going to assemble a different smear for every dissenting Democrat? If so it had better get started because the majority of the country opposes it.

Only 52 percent of Democrats support the deal. Are all the rest traitors too? Is the Democratic Party going to have purge most of its own treasonous base and only retain those fully loyal to Obama?

America is not a monarchy. Dissent is not treason. It can be the highest form of patriotism. And if being pro-Israel is treason, then how are we to describe Biden and Kerry’s ties to the Iran Lobby?

We have seen this before. This is an administration that fights ruthlessly against any changes to deeply flawed plans even when they undermine the success of the policy they are meant to implement. That’s what happened with ObamaCare and the administration was forced to illegally tinker with it to try and make it work. It would apparently like to do that with the Iran deal, which is one more reason to distrust all the empty assurances. The deal that the Senate will vote on is not the deal that we will get.

According to one of the first Supreme Court Justices appointed by George Washington, James Irewell wrote a paper addressing a situation wherein a future President forwarded a treaty to the Senate for approval but withholds vital information about the treaty---which is exactly the situation with the Iran Agreement which has two SECRET SIDE AGREEMENTS dealing with the verification of Iran's compliance with the Agreement that neither Obama or Kerry told Congress about. In Justice Irewell's paper, he determined that a President who withheld information from the Senate on a treaty was quilty of treason and should be impeached.

One of the reasons Americans are so mad now is because we elect Representatives and Senators to REPRESENT AND VOTE FOR OUR BENEFIT -- not for the benefit of either of the political parties nor for the benefit of the President. That hasn't been happening since 2000.

The Democrats have supported Obama in every UNCONSTITUTIONAL ACTION he has taken via his pen and telephone or via the regulatory agencies. This was especially true in the case of Obamacare and in the case of Obama's UNCONSTITUTIONAL amnesty for 5 million people who have illegally entered our country. Only a minority of Representatives and Senators honored their oath of office to protect and defend the Constitution of the USA.

The Democrats have been the Treason Party since Woodrow Wilson. They consistently enforce a top-down, rigid party discipline that ignores the Constitution, the national interest, and individuals' rights. The Republicans, who are now actively seeking a way to minimize and marginalize the Trump candidacy they find so threatening to their party discipline, aren't much better. For these and other reasons, the Constitution of the United States has been reduced to a charming anachronism of merely historical interest.

Once upon a time, partisan politics ended at the shoreline...then came Jimmah Cahtah and Beel Clinton...

The best scenario would be for the Senate to turn this puppy down 100-0 and for the House to do the same (a lot harder in the house to get 100% to agree on anything). The reason is that Obama wouldn't be able to play his partisan, divisive games, if there were a decisive vote in both Houses. Now, this is if the Democrats really care about country, over party. We'll soon find out.

I'm coming to the conclusion that it would be best for the country to outlaw political parties. Human nature includes a deep, clannish tendency that political parties appeal to. As a result, most politicians put their party above the interests of the nation. After all, it's their party that gets them elected each cycle.

@11:14 - why don't you leave me your name, address, and phone number so we can contact you when the first Iranian terror attack (nuclear, dirty bomb or conventional) unfolds?

I'm warning you, punk: the $150 billion Obama unleashed by running to the United Nations (patriotic, eh?) before allowing Congress to even read the deal has nothing to do with national security and everything to do with Obama.

The Progressive/Democrat Party is a criminal conspiracy masquerading as a political party;
The GOP are a gaggle of incompetents.
Neither put the interests of the country ahead of their own.

Voting for Obama in 2012 was treason, for anyone who paid the least bit of attention during his first term, when he worked for four years to advance the Muslim brotherhood to power in Egypt, backing them systematically and by name at every crucial turn, from demanding that they be decriminalized so that they could attend his Cairo speech to advantaging them at every stage of the opening up of elections to forcing Mubarak out so they could come in.

Whether or not one wants to admit the obvious, that Obama is following Muhammad's first instruction to Muslims who live amongst non-Muslims: that they should pretend to be non-Muslims themselves when by doing so they can advance the cause of Islamic conquest (Google "for war is deception"), what is undoubted is that he is ON THE SIDE of the Brotherhood and al Qaeda, because he worked diligently and specifically to advance their interests in Egypt all the way to the pinnacle of power. That is a matter of simple fact.

That was Obama's first attempt to find a home for the new caliphate. When the Egyptian people looked up into the abyss, rose up as one to save themselves and threw the Brotherhood out, Obama next turned to Libya, knocking off the al Qaeda suppressing Ghadaffi, then he backed the Islamofascists in Syria on the pretext that we needed to get rid of Assad.

The Defense Intelligence Agency warned that this policy was almost certain to lead to the rise of ISIS and the establishment of a new caliphate. It is known that Obama was not ignorant of this assessment, but was actively determined not to let it block his plans.

The biggest step was Obama's abandoning Iraq to ISIS, and his continuing refusal to destroy them while again and again they present easy targets for our air power as they mass in the desert for one attack after another. Obama has insisted that no single target be hit without his personal approval, then he refuses to ok more than a few token targets.

Obama is the Islamofascist general and it was known well before 2012 that he was at least on their side. This is our enemy in declared war (the 2011 AUMF against those who attacked us on 9/11) and Obama has given them systematic aid and comfort on the grandest possible scale his entire presidency. That's treason, and if willful blindness to treason makes a person an abettor or treason than half the country are traitors.

Willful blindness can probably not be charged with that much, but it is still a monstrous moral failing that has ushered in at the very least another century of mass murder, this time at the hands of Obama's Islamofascist friends/co-religionists.

Well congratulations to the Democrats. They do have an ounce of veracity.