THE FEDERAL RESERVE: A Solution in Search of a Problem 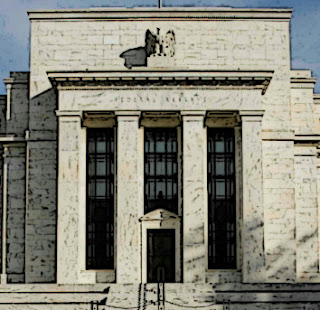 The Federal Reserve opened its annual symposium in Jackson Hole, Wyo., Thursday. Its experts have assembled to discuss “inflation dynamics.” Concurrently, another group of economists and financial experts is meeting just down the road. They’re discussing monetary policy, as well, but they’re considering questions never raised at Fed symposia—questions like: “Do we really need the Fed?”

It’s a question worth asking. America’s monetary system is the Achilles heel of the world’s economic system.

Something is seriously wrong when trillions of new dollars are created out of thin air to bail out big banks, “stimulate” the economy and buy government debt. And something is dangerously wrong when the political establishment is afraid even to discuss it.

The common assumption—in financial as well as political circles—is that America’s central bank, the Federal Reserve—not only can manipulate monetary policy to keep the economy rolling, but that it must, if we are to avoid economic ruin. But ample evidence suggests that this assumption is dead wrong.

The Fed’s track record offers no evidence that the nation’s appointed gurus of monetary policy can either spur real economic growth or halt economic downturns.

Before reviewing that evidence, let’s start with a basic question: “Who decides what money is worth?” The correct answer is: “We do—the people who use money to buy and sell things.” As consumers, we decide how much money we are willing to trade for things we want. As sellers, we decide how much money we require for providing a given product or service.

Money is a proxy for something of value, and it can—and should—work as a market commodity. In a free market, the dollar price of products and services changes based on supply and demand – based on how we perceive the value of goods and services. This dynamic is good and healthy for our economy. But when the actual value of money is altered by a central committee in Washington it is not healthy… in fact, it can be dangerous.

Faith in the Fed is built on three arrogant conceits: that government can create wealth; that designated experts possess the perfect knowledge required to manipulate money for the common good, and that markets cannot sort themselves out without the coercive influence of technocrats.

But the Fed’s track record offers no evidence that the nation’s appointed gurus of monetary policy can either spur real economic growth or halt economic downturns.

As for halting downturns, The Great Depression, the great stagflation of the 1970s, the S&L crisis, and the 2008 financial crisis all occurred on the Fed’s watch. Some argue that the Depression shouldn’t count, because the Fed was just getting started. This conveniently allows them to throw out about 30 years of data—and if you do that, it certainly looks better for the Fed, because recessions were more frequent before World War II than after.

But inconveniently for those who argue the Fed was too young to work its magic in the late ‘30s, Milton Friedman and Anna Schwartz demonstrated in A Monetary History of the United States, that it was a major player, even in its infancy. Moreover, Friedman showed that the Fed actually worsened – if not caused – the Great Depression.

Looking at the entire Federal Reserve period, then, we see a different picture.

In 1986 Christina Romer published a paper in the American Economic Review titled “Is the Stabilization of the Postwar Economy a Figment of the Data?” Its answer to that question was pretty much “yes.”

In that paper, and in subsequent work, Romer and others provided evidence that the Fed really had not tamed business cycles. Some of this research shows that, even with those Depression years tossed aside, recessions since World War II have, on average, lasted longer than pre-war recessions (by almost three months) and taken longer to recover from (also by about three months).

Faced with that evidence, the Fed faithful try to narrow the discussion to the Volcker and Greenspan years, the so-called Great Moderation. “See,” they say, “The Fed tamed inflation.” But while the variability in inflation came down during those “glory days,” the average annual rate of inflation actually increased—from 3.56 perent in 1948-1978 to 3.74 percent from 1979-2013.

And looking at the full era of the Fed, the record is even worse. The average rate of inflation runs about three times higher than what it was before (less than one-half a percentage point from 1790-1912, as best we can tell).

Some economists will argue that’s not a problem—that higher average inflation is okay because we don’t have as many wild price swings any more. But most people understand that higher inflation is problematic, that not everything balances out. They realize that not everyone gets an automatic raise every year just because the Consumer Price Index has gone up.

But the fundamental problem with the Fed isn’t its track record. It’s the fact that centralization of monetary and financial power can be just as damaging to our freedoms as centralization of political power. It creates the perception among Americans that their economic futures are out of their control. Unfortunately, this perception is increasingly accurate.

The debasement of monetary policy over the last century is but one element of a larger crisis. At its root is a presumption among our country’s political and cultural elites that they can override the wisdom and experience accumulated by mankind over the last several millennia.

at 9:09 PM
Email ThisBlogThis!Share to TwitterShare to FacebookShare to Pinterest
Labels: Economy, Obama

The entire scheme of fiat money, and the monopoly power to create near-infinite amounts of both money and debt, is the grandest scheme of embezzlement of private wealth in all human experience. The first beneficiary is government, for when government prints a billion dollars, it spends it for things that benefit government, even if it goes to pay "benefits" after the bureaucracy is properly funded.

Printing money is theft by dilution similar to when a bartender dilutes the liquor.

In previous ages, government used to be limited first by the limited amount of money in the till. That tended to keep bureaucrats focused on core priorities. That tended to limit their dreams of expanding their power and control over the citizens and others.

Much of the overly powerful and overly expansive bureaucracy we have today is exactly because we have allowed government to give itself the power to create near-infinite amounts of money. The first means by which we the people can use to restrain government is simply by forcing it to live within its means. That is, to not allow it to spend more money than taxpayers are willing to write checks for.

When the states hold an Article V convention to consider amendments to the Constitution, the first order of business must be to revoke government's power to create near-infinite amounts of money.