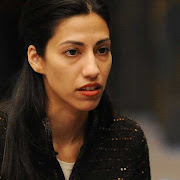 [One] message [that should have been classified], dated April 10, 2011, was forwarded to “H,” for Hillary Clinton, then the secretary of state. It came from one of her closest aides, Huma Abedin, who is now vice chairwoman of her presidential campaign ... The matter could form the basis for a criminal probe of whether laws for handling classified material were broken.

...There are other examples that suggest Clinton aides drew upon a variety of classified information to produce updates of events in Libya and elsewhere and sent them via email, according to the officials familiar with the investigation who asked not to be identified.

...Anybody who knowingly emailed classified material to Clinton or her top aides when she was secretary of state could face criminal prosecution, according to current and former U.S. national security officials. Those who inadvertently send or receive classified data could be prosecuted for gross negligence.

...There are several scenarios in which known classified material could have been improperly transferred, according to [former NSA and CIA director Michael] Hayden and one of the U.S. officials who asked for anonymity ... The most egregious way would be to knowingly strip classification markings from documents or other data, a move that would clearly be a criminal act.

Steven Ahle relays news of a whole school of lawyers hired by the Humster:

Huma Abedin has hired an entire team of lawyers to handle her ever growing number of scandals. She is heavily involved in Hillary’s private email scandal. She denied that she had an email account on Hillary’s server. On Monday, Hillary told a federal judge that Abedin did indeed have an email account. If she doesn’t produce emails from that account, she could be in huge trouble. She also claimed pay for when she was on vacation in Italy and at home after giving birth to her first child. She could also be a suspect in the changing of the confidential and top secret codes on Hillary’s emails.

In related news, a second Clinton email server is likely to exist:

Conflicting accounts of when data was removed from Hillary Clinton's private server indicate copies of emails known to contain classified information may reside on a device other than the one presently in FBI custody...

...Platte River Networks, the company that managed Clinton's email network after she stepped down from her post as secretary of state, indicated it transferred data off the original server in mid-2013...

...But the Clinton campaign has suggested the former secretary of state did not erase emails she deemed personal until January of this year, raising questions as to where the emails were located when her staff sifted through them to determine which were related to her government service...

If a second server or any backup media for the Clinton server are discovered, the full scope of Clinton's criminal activities may become clear. I refer not only to the co-mingling of classified data on insecure and unapproved devices, but also to the pay-for-play activities of the State Department as it relates to the Clinton Global Graft Initiative.

Huma's best bet at this point may be to start working a plea bargain.

Undersecretary Patrick Kennedy, a man whose name swirled around Benghazi (and who was not subject to the whitewash investigation) and likely sent more than a few of those classified emails to Hildabeast, is the same man now in charge of handling Hillary's production to the State Dept. He is the man who has cut off all cooperation with the IG of the Intelligence Communities and is refusing to allow them to review any of the produced documents. Why the House Select Committee on Benghazi does not have Kennedy and Lurch before them yesterday to discuss the handling of these documents and the criteria for redaction is beyond me.

Kennedy&Lurch left out of this investigation on Purpose! Gowdy isnt the DC Cop you think! Hes as Impotent as Biden out of Viagra!
Just list 1 person Gowdy has followed thru on Charges against? Hello? Just 1! Arent none!

Ms. Weiner bein' setup to take the fall, for the smahtist woman on earth.

The first time calls were made to investigate Huma, John McCain and John Boehner trashed conservatives. Regrettably, requests were denied. What do they say now that they were completely wrong? Crickets.