EDITOR'S NOTE: Facebook has lifted the ban on the Center's job reports pages. The Center has not heard from Facebook directly, they did make a statement to Breitbart News: 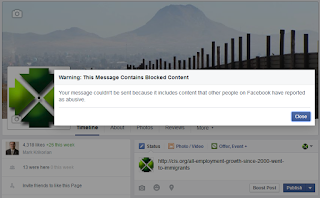 When asked what happened—and for a response to CIS—a Facebook spokesperson told Breitbart News that it was just a simple error in their system, not a malicious attempt by the social media giant to use censorship to push its founder’s political agenda.

“An error in our system that helps block bad links on Facebook incorrectly marked some URLs as malicious,” the Facebook spokesperson said in an email. “We’ve resolved the issue and apologize for the inconvenience this caused.”

Although the Facebook spokesperson states that the pages were banned due to an error marking them as "malicious", the automated response from Facebook while the ban was in place specifically stated that they were blocked for "abuse".

An informed debate over immigration requires data and analysis about its effects. Only with information from a variety of sources can Americans try to understand our current policies, assess proposed changes, and judge candidates for political office.

That is why it is so disturbing that Facebook, owned by immigration-expansionist Mark Zuckerberg, has banned four reports published by the Center for Immigration Studies pertaining to jobs and immigration.

The Center became aware a week ago that these four reports were blocked:

When a Facebook user attempts to post or message these reports, a message appears stating, "Your message could not be sent because it includes content that other people on Facebook have reported as abusive." 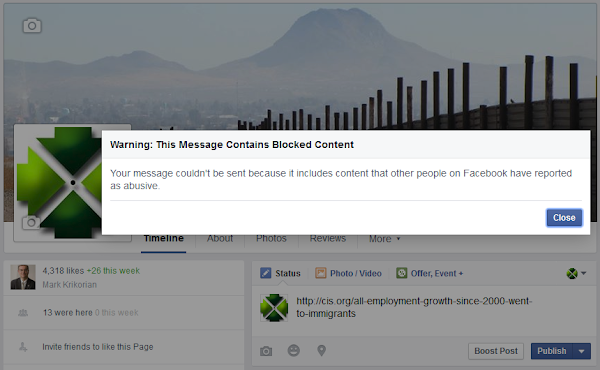 Dr. Steven Camarota, the Center’s director of research and the author of the reports, said, “The poor job market is one of the most important issues confronting the country. It is extremely troubling that Facebook would block studies that simply report government data on how immigrants and natives are faring in the U.S. job market. These reports have received a good deal of attention from various media outlets and have been discussed by members of Congress. It is absurd to suggest they are 'abusive.'"

According to an article by Facebook entitled, "What Happens After You Click 'Report'", a ban on content is caused by a user or users reporting content, which is then reviewed by a "Abusive Content team" – the ultimate decision-makers regarding what is considered to be abusive.

Apparently, Facebook considers the Center's jobs reports to be "hate speech", which they define as "Content that attacks people based on their actual or perceived race, ethnicity, national origin, religion, sex, gender, sexual orientation, disability or disease is not allowed." It is unclear how these specific job reports violate Facebook Community Standards.

Once we became aware of the Facebook ban, we completed the report form Facebook has designed to remedy mistakes. If you have the time, please fill it out and let Facebook know what you think about their "abuse" policy. So far the Center has not received any feedback from Facebook.