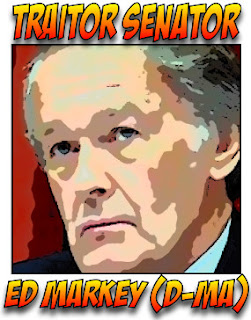 Senator Ed Markey (Democrat-Massachusetts) has announced his support for the Iran deal that will let the terrorist regime inspect its own Parchin nuclear weapons research site, conduct uranium enrichment, build advanced centrifuges, buy ballistic missiles, fund terrorism and have a near zero breakout time to a nuclear bomb.

There was no surprise there.

Markey had topped the list of candidates supported by the Iran Lobby. And the Iranian American Political Action Committee (IAPAC) had maxed out its contributions to his campaign.

After more fake suspense, Al Franken, another IAPAC backed politician who also benefited from Iran Lobby money, came out for the nuke sellout.

Senator Jeanne Shaheen, the Iran Lobby’s third Dem senator, didn’t bother playing coy like her colleagues. She came out for the deal a while back even though she only got half the IAPAC cash that Franken and Markey received.

As did Senator Gillibrand, who had benefited from IAPAC money back when she first ran for senator and whose position on the deal should have come as no surprise.

The Iran Lobby had even tried, and failed, to turn Arizona Republican Jeff Flake. Iran Lobby cash had made the White House count on him as the Republican who would flip, but Flake came out against the deal. The Iran Lobby invested a good deal of time and money into Schumer, but that effort also failed.

Still these donations were only the tip of the Iran Lobby iceberg.

Gillibrand had also picked up money from the Iran Lobby’s Hassan Nemazee. Namazee was Hillary’s national campaign finance director who had raised a fortune for both her and Kerry before pleading guilty to a fraud scheme encompassing hundreds of millions of dollars. Nemazee had been an IAPAC trustee and had helped set up the organization.

Bill Clinton had nominated Hassan Nemazee as the US ambassador to Argentina when he had only been a citizen for two years.  A spoilsport Senate didn’t allow Clinton to make a member of the Iran Lobby into a US ambassador, but Nemazee remained a steady presence on the Dem fundraising circuit.

Nemazee had donated to Gillibrand and had also kicked in money to help the Franken Recount Fund scour all the cemeteries for freshly dead votes, as well as to Barbara Boxer, who also came out for the Iran nuke deal. Boxer had also received money more directly from IAPAC.

In the House, the Democratic recipients of IAPAC money came out for the deal. Mike Honda, one of the biggest beneficiaries of the Iran Lobby backed the nuke sellout. As did Andre Carson, Gerry Connolly, Donna Edwards and Jackie Speier. The Iran Lobby was certainly getting its money’s worth.

But the Iran Lobby’s biggest wins weren’t Markey or Shaheen. The real victory had come long before when two of their biggest politicians, Joe Biden and John Kerry, had moved into prime positions in the administration. Not only IAPAC, but key Iran Lobby figures had been major donors to both men.

That list includes Housang Amirahmadi, the founder of the American Iranian Council, who had spoken of a campaign to “conquer Obama’s heart and mind” and had described himself as “the Iranian lobby in the United States.” It includes the Iranian Muslim Association of North America (IMAN) board members who had fundraised for Biden. And it includes the aforementioned Hassan Nemazee.

A member of Iran’s opposition had accused Biden’s campaigns of being “financed by Islamic charities of the Iranian regime based in California and by the Silicon Iran network.” Biden’s affinity for the terrorist regime in Tehran was so extreme that after 9/11 he had suggested, “Seems to me this would be a good time to send, no strings attached, a check for $200 million to Iran”.

Appeasement inflation has since raised that $200 million to at least $50 billion. But there are still no strings worth mentioning attached to the big check.

Questions about donations from the Iran Lobby had haunted Kerry’s campaign. Back then Kerry had been accused of supporting an agreement favorable to Iran. The parameters of that controversial proposal however were less generous than the one that Obama and Kerry are trying to sell now.

The hypothetical debates over the influence of the Iran Lobby have come to a very real conclusion.

Both of Obama’s secretaries of state were involved in Iran Lobby cash controversies, as was his vice president and his former secretary of defense. Obama was also the beneficiary of sizable donations from the Iran Lobby. Akbar Ghahary, the former co-founder of IAPAC, had donated and raised some $50,000 for Obama.

It’s an unprecedented track record that has received very little notice. While the so-called “Israel Lobby” is constantly scrutinized, the fact that key foreign policy positions under Obama are controlled by political figures with troubling ties to an enemy of this country has gone mostly unreported by the mainstream media.

This culture of silence allowed the Iran Lobby to get away with taking out a full-page ad in the New York Times before the Netanyahu speech asking, “Will Congress side with our President or a Foreign Leader?”

Iran’s stooges had taken a break from lobbying for ballistic missiles to play American patriots.

Obama and his allies, Iranian and domestic, have accused opponents of his dirty Iran deal of making “common cause” with that same terror regime and of treason. The ugly truth is that he and his political accomplices were the traitors all along.

Democrats in favor of a deal that will let a terrorist regime go nuclear have taken money from lobbies for that regime. They have broken their oath by taking bribes from a regime whose leaders chant, “Death to America”. Their pretense of examining the deal is nothing more than a hollow charade.

This deal has come down from Iran Lobby influenced politicians like Kerry and is being waved through by members of Congress who have taken money from the Iran Lobby. That is treason plain and simple.

Despite what we are told about its “moderate” leaders, Iran considers itself to be in a state of war with us. Iran and its agents have repeatedly carried out attacks against American soldiers, abducted and tortured to death American officials and have even engaged in attacks on American naval vessels.

Aiding an enemy state in developing nuclear weapons is the worst form of treason imaginable. Helping put weapons of mass destruction in the hands of terrorists is the gravest of crimes.

The Democrats who have approved this deal are turning their party into a party of atom bomb spies.

Those politicians who have taken money from the Iran Lobby and are signing off on a deal that will let Iran go nuclear have engaged in the worst form of treason and committed the gravest of crimes. They must know that they will be held accountable. That when Iran detonates its first bomb, their names will be on it.

Their names might be on it but the only fucking way in the world these scumbags will ever be held accountable is if they're near Ground Zero.
MM

No surprise here. The democrat party has long been an enemy to Americans and friend to our foes. What party supported and continues to support the subversive anti-American activities of the Communist Party? What party were those who gave the atomic bomb to Stalin? In their demented justification for their despicable treasons, they believe it was only fair that Russia got the bomb too. It's only fair that our enemies have nuclear weapons too. In their deranged worldview, America is a bad character that needs to be chopped down to size. And that is the difference in the two parties in the US. Republicans believe in America and see it as the greatest force for good in the world, while democrats despise America and more so, Americans, and see this nation as the greatest force of evil in the world.