“The foundation of our Empire was not laid in the gloomy age of Ignorance and Superstition, but at an Epoch when the rights of mankind were better understood and more clearly defined, than at any former period…The United States came into existence as a Nation, and if their Citizens should not be completely free and happy, the fault will be entirely their own.” So declared George Washington at the time of our founding as a nation. 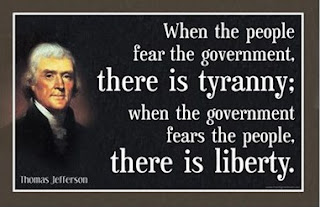 It is unique and exceptional that this nation was established according natural law, and declared inalienable individual rights of life, liberty, and property, or the pursuit of happiness. In an era when monarchs, rulers, oligarchs, autocrats and aristocrats governed according to their whims and disposition, having derived their right to rule based on caste or bloodline, a motley collection of men steeped in classical-liberal principles led a revolution and established a nation dedicated to individual freedom.

Those precepts were the foundation to the Declaration of Independence, which states, “We hold these truths to be self-evident, that all men are created equal, that they are endowed by their Creator with certain inalienable Rights, that among these are Life, Liberty and the pursuit of happiness. That to secure these rights, Governments are instituted among men, deriving their just powers from the consent of the governed.” There is nothing more exceptional in human history than those two sentences and the nation that resulted from their utterance: a nation that derived its “just” powers from the “consent of the governed.”

A decade later, the structural document creating the governmental framework based on the tenets articulated in the Declaration of Independence was ratified by the colonies. That document, our Constitution, stated specifically as enumerated powers, what our national government could do, and whatever powers were not specified or enumerated, were “reserved to the states respectively or to the people.”

But even at the nascent stages of the American experiment, the author of liberty, Thomas Jefferson, saw how our system would metamorphose into something entirely different. “Experience hath shewn, that even under the best forms of government those entrusted with power have, in time, and by slow operations, perverted it into tyranny.”

What started as a small list of enumerated powers in the Constitution, has evolved to hundreds of thousands of pages of laws and regulations in the Federal Register, and a government that has debt greater than the entire gross domestic product of the nation. Laws have become so obtrusive that in any given day, millions of our fellow citizens can unwittingly commit “crimes” against the state, as documented in the Alan Dershowitz and Harvey Silverglate book, “Three Felonies A Day: How the Feds Target the Innocent.”

We are so far removed from our foundation of individual liberty, that literally every action of every day that we engage in is regulated, taxed, or overseen by an omnipotent Master governing its peon subjects. The tyrannical control of our lives far, far exceeds the relatively minor transgressions of King George against our founding colonists.

Political scientist Theodore Lowi attested to this devolution from liberty to governmental tyranny, forty years ago in his book “The End of Liberalism.” He empirically documented that “modern liberalism has left us with a government that is unlimited in scope but formless in action.” He illustrated how such a government “can neither plan nor achieve justice because liberalism replaces planning with bargaining and creates a regime of policy without law.”

With such a noose of governmental control around the throat of the country, it’s amazing that anything can be produced, sold, or used, for as government grows in scope, power, and control, individual liberty is diminished and quashed. It’s a testimonial to the viability of capitalism that even under such oppressive regulatory control of the means of production that we can still eek out a modicum of GDP growth.

Government is increasingly looked to as the benevolent patriarch that can bestow “rights” and entitlements to a beseeching clientele, diminishing the liberty, rights, and privileges, of another. In short, we have a new master and we are all its subjects.

The cost of this bloating and egregious governmental power is great, and the cumulative cost can literally destroy a nation financially. Greece typifies this collapse, with several European nations not far behind. As columnist and author Dennis Praeger has said, “Countries will either shrink the size of their government, or they will eventually collapse economically. Every welfare state is a Ponzi scheme, relying on new payers to pay previous payers. Like the Ponzi scheme, when it runs out of new payers, the scheme collapses. European countries, all of which are welfare states, are already experiencing this problem to varying degrees.”

Can we ever reverse this course, and make a strong case for liberty again? It won’t be easy. For every dole paid out by our federal master, there is a clientele that would vociferously denounce any effort at reduction. In a representative democracy, the most vocal citizens appropriate to themselves more attention from the powers that be. But if the nation is to survive financially, the trend must be reversed.

This will require a resolute and informed electorate that is more vocal than the beneficiary recipients of our nanny-state master’s noblesse oblige. But if we’re to prevent the otherwise inevitable collapse of our currency, our economy, and the nation, we must muster the will and determination to begin shrinking the scope and cost of government. As Thomas Jefferson said, “The best government is that which governs least.” It’s also more likely to endure.

We will not succeed in reversing the tide until we can, by some miracle, discover antidotes to welfarism and the scourge of "compelling government interest" and figure out how to apply them simultaneously.

Garet Garrett had a great deal to say about this in his essay "The Revolution Was."