By Gun Owners of America

Today, the President picked up his “phone and his pen” and continued his assault on the Second Amendment.

On the presidential website, the President declared war on senior citizens, and on private individuals who, in some cases, sell as few as one firearm.

Those are just the highlights. There is much more, and you can read additional analysis of the President’s imperial diktat here.

But bottom line: Having failed to get gun control legislation passed in Congress, Obama is doing what he always does when he can’t get what he wants.

You can be sure that Gun Owners of America will be doing everything in its power to fight these edicts tooth-n-nail. More on this below.

Open Season on Seniors and Other Law-Abiding Gun Owners

Gun Owners of America alerted you back in July of last year that Obama wanted to ban Social Security beneficiaries from owning guns, if they are deemed as being unable to manage their financial affairs.

With this new executive action, that policy has now been officially announced:

The Social Security Administration (SSA) has indicated that it will begin the rulemaking process to ensure that appropriate information in its records is reported to NICS [and] will cover appropriate records of the approximately 75,000 people each year. 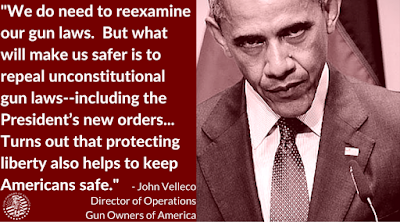 The President also wants to take America back 30 years -- prior to the reforms in the Firearms Protection Act of 1986 -- and unleash a horde of additional ATF agents to entrap law-abiding Americans who are supposedly “engaged in the business” of selling firearms.

What constitutes being “engaged in the business” -- selling 50 guns ... 25 guns ... 15 guns ... or 5 guns? While the President’s lawless decree doesn’t say, it does suggest the number could be as low as “one or two transactions.”

So if you’re financially strapped in this Obama economy and want to make a few bucks selling off the firearms in your home, look out. You could be “sentenced up to five years in prison and fined up to $250,000” if you are subsequently determined to have “engaged in the business” of selling an unspecified number of firearms without a license.

The alternative, of course, is that you voluntarily become an FFL and conduct background checks on every gun you sell -- guns that you legally bought as a private citizen.

Just as the President admitted that ObamaCare would serve as a first step to single-payer (aka, socialistic) health care, so will these gun control regs push us one-step closer to universal gun registration, which is what the President actually wants.

Dumb Guns for Everyone

The Hypocrite in Chief also is directing several federal agencies “to review the availability of smart gun technology on a regular basis, and to explore potential ways to further its use and development....”

Of course, such a move is entirely hypocritical, given that the President has made no indication that his Secret Service agents will also be carrying these dumb guns.

As stated by Breitbart’s A.W.R. Hawkins: “When it comes to his personal safety, Obama appears to remain a big fan of traditional firearms.”

What Can Gun Owners Do?

The easiest solution is to elect a pro-gun president.

While several presidential hopefuls have already indicated they would repeal the Obama’s executive actions if elected, the GOA-endorsed candidate, Ted Cruz, has promised to erase Obama’s gun control legacy.

"[The President] has a phone and he has a pen, but if you live by the pen you die by the pen, and my pen has got an eraser," Sen. Cruz said.

Second, Gun Owners of America will be working with legislators on Capitol Hill to “defund” the president’s unlawful orders. This is the preferred “short term” approach because these no-funding provisions can be attached to “must pass” bills that the president will sign. Stay tuned for future alerts to this effect.

Third, GOA and its foundation are pursuing swift legal action. We have already fought battles like this -- and won.

For example, GOA was recently involved in the legal defense of Bob Arwady in Houston, who was wrongly accused of dealing in firearms without a license --- and he was acquitted by a jury. You can read more on this case here.

Lastly, Kentucky Senator Rand Paul (R) introduced legislation last month to that declares that any executive action by Obama that infringes upon the Second Amendment rights of all Americans “shall have no force or effect.”

This is a good bill (S. 2434), and we will pursue it if we think there is any chance of pushing it past a presidential veto.

Who cares. The guy is a laughing stock, a fool. He has nothing on Freemen. He is illegitimate in every respect. And he and his dictatorship regime can kiss my butt.

Want to see what America really is? How beautiful this great Republic is and what legitimacy really is and is about?
Watch this video clip of real law abiding God fearing caring unselfesh Americans do what must be done to save our freedom, our liberty, our dignity.
Beautiful! I cried with joy watching these Ranchers stand up to tyranny.
Incredible.
We just won liberty because of these Ranchers virtue and legitimacy.
You have to see it with your own eyes.

Well, they've queered the economy, eliminated interest income, and driven people onto disability so this move makes sense. When your money runs out make a point of selling your guns individually without permission, then spend the last ten years of your life with free grub, healthcare, and enjoy other people your age.