Detecting a pattern yet? 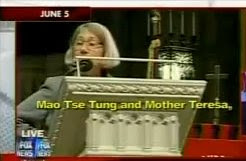 • Van Jones, a self-described Communist, was Barack Obama's "Green Jobs Czar" until he was forced to resign over his alleged support for 9/11 Truther insanity.

It is impossible to imagine official homage in Germany for Hitler or in Russia for Stalin. And yet Mao was a destroyer of the same class as Hitler and Stalin. He exhibited his taste for killing from the early 1930's, when, historians now estimate, he had thousands of his political adversaries slaughtered. Ten years later, still before the Communist victory, more were executed at his guerrilla headquarters at Yan'an.

Hundreds of thousands of landlords were exterminated in the early 1950's. From 1959 to 1961 probably 30 million people died of hunger — the party admits 16 million — when Mao's economic fantasies were causing peasants to starve and he purged those who warned him of the scale of the disaster.

Many more perished during the Cultural Revolution, when Mao established a special unit, supervised by Prime Minister Zhou Enlai, to report to him in detail the sufferings of hundreds of imprisoned leaders who had incurred the chairman's displeasure.

One of the chairman's secretaries, Li Rui, wrote recently, "Mao was a person who did not fear death, and he did not care how many were killed."

During a June 2008 speech, Dunn described her political inspirations. 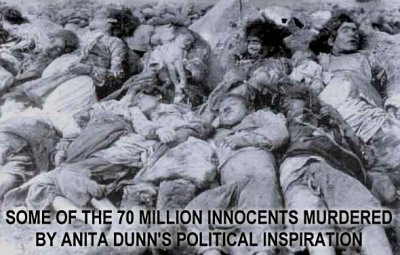 And the third tip actually comes from two of my favorite political philosophers, Mao Tse Tung and Mother Teresa... the two people that I turn to most to basically deliver a simple plan.

In 1947, when Mao Tse-Tung was being challenged within his own party... to take China over, Chiang Kai-Shek [and his soldiers] held the cities, held the armies, held the air force... the people can say can say how you can do this? Mao said, 'You fight your war, I'll fight mine'... you don't have to accept the definition of how to do things... you fight your own war.

So Anita Dunn, White House Communications Director, has a favorite politician: the Hitler of China, Mao Tse-Tung. The man who slaughtered 70 million innocents.

But Fox News is the "enemy".

Truth is the first casualty of war