CRUZ OR TRUMP? Let Jimmy Carter Be Your Guide 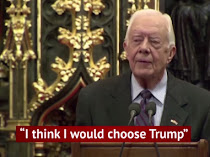 A lot of good people, including many friends of mine, have signed up to support Donald Trump for POTUS. That was understandable when Trump was saying great things about illegal immigration and the media was telling us Ted Cruz couldn’t win.

Now its very clear that Cruz can, and most probably will win, and Donald Trump has revealed himself as more “progressive” than principled.

In my view, restoring the US Constitution would solve the bulk of America’s social, economic and political problems in one fell swoop.

Ted Cruz memorized the entire Constitution at age 14. He has fought several important court battles to preserve it. Senator Cruz lives, eats and breathes the Constitution.

How many times have you ever heard Donald Trump even mention it?

But if you’re still in doubt, America’s second worst ever President should settle the question.

Hmmm would this be the very same Trevor LOUDmouth that said when Jeb was announcing over a year ago, that we needed to get behind one consecrative candidate. Now Trump might not be top to the conservative bona vides that Mr Ivory Tower wants but the fact is by the time Trump announced, Cruz had been running for almost 6 months and hadn't said shit about a wall, illegal immigration, amnesty or the 100s of 1,000s of H1-B visas was in favor of. All that was coming out of his soup coolers were platitudes.

It was Trump that went right to the heart of the matter by directly addressing the policies that have turned our way of life into a nightmare. And it was still months before Cruz finally reversed himself on a number of positions and lined them up with what was clearly winning huge majorities.

No Trump doesn't talk about the Constitution. He talks about sending back "syrian refugees" He talks about building a wall to secure our border. He says illegals here yaknow, ILLEGALLY must return to their own country or be returned. He talks about turning around our huge trade deficits. He talks about rebuilding our military.

Sounds good to me bub.
MM

With all due respect, "Ted Cruz Was Talking About Building a Wall Before Trump Even Announced His Candidacy."

TO Zardoz
BRAVO! You took the words right out of my mouth.

TO dirBlue
Yeah, yea, yeah...talk, talk, talk...just like
John "build that danged wall" McCain.
Cruz is just another *talker*,
who does NOT have what it takes to make it happen, in my opinion.

Zardoz obviously had a brain injury that he never recuperated from. He cannot make any comment of real substance so he makes name calling his forte.
I am sure someone such as Zardoz will vote for Trump because they are two peas in a pod. They are ignorant of the issues so they simply flatulate a lie then boast about it.
People who follow Trump are mostly following name recognition from their couch potato days watching him on his reality TV series. Many still believe that Trump's Presidential bid is a continuation of his reality TV series. They just don't have enough synapses to know any better.

Opinion out of the mouth of America's 2nd worst president and an anti-Israel anti-Semite!

DirectorBlue, whomever you are, you are being deliberately misleading or just telling lies on purpose regarding Cruz ever talking about a wall. Your statement when given in the context of a discussion of a Trump Wall implies that Cruz talked about a Trump Wall prior to Trump announcing. This is blatantly false. Trump's Wall is 1000 to 1500 miles long and 30ft high.

Cruz does not talk about such a wall even today (although he would like to fool people through misdirection into thinking he means such a wall). Cruz NEVER talked about a Trump Wall previously either. He talked about "fencing", border guards, and mentioned the word wall as part of fencing and border guards. In other words Cruz talked JUST LIKE MCCAIN AND ALL THE REST. He never ever spoke about a wall 1000 to 1500 miles long and 30ft high. So stop lying about your boy Cruz. He is no Trump when it comes to walls and immigration.

You want to know how important a wall was to Cruz, look at his announcement speech at Liberty University when he announced his run for president. The entire speech barely mentions more than five words about immigration, and he does so using the same words that flow out of the mouths of McCain and Graham. He just said we need "border security". No mention of a wall or criminal illegals or the tons of other things Trump spoke about in his announcement speech.

One could easily confuse the words spoken by Cruz in his announcement for the words coming from any of a number of open borders republicans like Rubio, McCain and Graham. NOBODY COULD CONFUSE TRUMP'S WORDS ABOUT A WALL AND ILLEGALS AND ILLEGAL IMMIGRATION AS HAVING COME FROM ANYONE BUT TRUMP.

If you want to build credibility, then don't tell such obvious lies about your boy Cruz.

Except when it comes to the part about being a "natural born citizen" to be qualified to be President.

Cruz is NOT a natural born citizen under anything but a wide open liberal living breathing constitution interpretation or should I say RE-interpretation of that phrase.