Responding to one of Anderson Cooper’s softball questions, socialist Bernie Sanders (I-VT) told the CNN Town Hall on Wednesday night that he lives a frugal life and indicated that he doesn’t care about money or status. “I have a small Chevrolet,” he said. “It is one of the smallest Chevys that they make.” He said it was about five years old.

But James O’Brien, a political consultant and former publisher of Campaigns & Elections magazine, says the career politician, who has been a mayor, member of Congress and U.S. senator, has achieved the financial status of a millionaire.

O’Brien has analyzed the financial status of Sanders and his wife, including their financial disclosure report, and has concluded they have a net worth in the range of $1.2 to $1.5 million, not the $700,000 or less that is usually reported by the media. 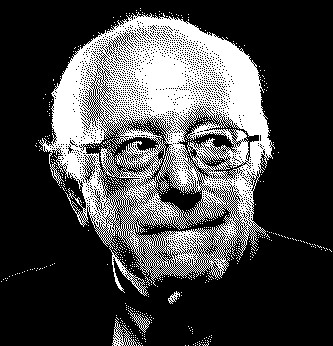 Rather than “Feel the Bern,” the phrase associated with popular support for the self-declared “democratic socialist,” O’Brien says that Sanders is personally “Feelin’ the Wealth.”

Equally significant, his wife, Jane O’Meara Sanders, left her position as president of Burlington College under controversial circumstances and is now being accused of federal bank fraud. She left her position at the college and was given a severance package known as a “golden parachute” that also benefited Senator Sanders’ personal wealth.

Brady C. Toensing, a partner with the law firm of diGenova & Toensing, has filed a legal complaint with federal authorities requesting an investigation into apparent federal bank fraud committed by Ms. Sanders. His complaint was sent to Eric S. Miller, the U.S. Attorney for the District of Vermont, and Fred W. Gibson, Jr., Acting Inspector General with the Federal Deposit Insurance Corporation.

A Sanders spokesman told the Burlington Free Press that the complaint was an effort to throw mud at the presidential candidate.

O’Brien says that Sanders’ financial disclosure forms are incomplete. “For someone who doesn’t care about money, he goes a long way to cover up his true net worth,” he says. “Bernie does not disclose the value of real estate holdings. He can. He is not required to, but he could if he chose. It is known that he and/or his wife own at least two homes—one with rental income in Vermont and one near Capitol Hill where the median home value is $722,000.”

O’Brien bases his conclusions about Sanders’ millionaire status on what is known and can be estimated about his salary, the income of his wife, joint income, investments, pension, and value of his real estate properties.

In addition to the questions about his real net worth, Jane Sanders’ exit from Burlington College continues to generate controversy, even scandal. She was president of the college from 2004 until 2011.

Federal officials have acknowledged the complaint about Jane Sanders from attorney Brady C. Toensing, but they won’t say whether they are going forward with an investigation.

Although Senator Sanders frequently complains about the “corporate media” that are supposed to have a bias against his candidacy, the necessary task of digging into the finances of his wife has been left to the conservative media and some local Vermont news organizations.

At the very least—as noted by Bruce Parker, a Vermont reporter for Watchdog.org—Senator Sanders should be asked to explain how his opposition to severance packages for corporation executives squares with his wife getting a cushy severance of $200,000.

In a story headlined, “Bernie Sanders’ Wife May Have Defrauded State Agency, Bank,” reporters Blake Neff and Peter Fricke of the conservative Daily Caller News Foundation reported the essential facts of the case, noting that she nearly bankrupted Burlington College when she took on $10 million in debt to finance the purchase of a new, far more expansive campus. “The move backfired massively, leading to Sanders’ departure from the college and the near-collapse of the institution,” Neff and Fricke report.

By any standard of fair and objective news reporting, a candidate who promises “free college” to America’s young people should be asked to address the issue of his wife’s financial shenanigans almost bankrupting an institution of higher learning. But it hasn’t been raised in the debates.

At one point it was reported that Burlington College was fighting for its very survival. “As a result of its financial woes, Burlington College is on academic probation from the New England Association of Schools and Colleges,” reported VTDigger.org, a statewide news website, in 2014.

VT Digger confirmed the nefarious role played by Jane Sanders, noting that she “overstated donation amounts in a bank application for a $6.7 million loan that was used by the college to purchase a prime 33-acre property on Lake Champlain in 2010.” Jane Sanders “resigned under pressure from the Burlington College board of trustees nearly a year after obtaining the multi-million dollar loan,” the site reported. “After both sides lawyered up, the board gave Sanders the title of president emeritus and a $200,000 severance package.”

A Republican activist named Skip Vallee produced a 60-second television advertisement entitled, “Bernie’s Golden Parachute,” describing the nature of the $200,000 severance package and making the point that while Sanders was planning a presidential run “on a theme of railing against golden parachutes and excesses” on Wall Street, he took “his own golden parachute” through his wife’s curious dealings with the cash-strapped college.

The ad features the “S” in Sanders in the shape of a dollar sign and shows Sanders saying the rich in America “manipulate a rigged system” and benefit from “golden parachutes.”

On top of this scandal, The Washington Free Beacon has reported that Senator Sanders used campaign money to benefit members of his family, and that Jane Sanders directed six-figure sums from Burlington College to her daughter and the son of a family friend.

“Getting money out of politics” is one of the planks in Sanders’ presidential campaign platform.

Almost every upper-middle class couple in their 60's or 70's has a net worth of $1 million or more, unless they are poverty stricken due to bad luck or bad health.

I don't like Bernie Sanders politics at all, but you have just provided more proof that he is an honest man. Less than $2 million? That's real proof. How much are Bill and Hillary worth?

He has $1.2 to $1.5 million in the bank your are berating him on wealth that's laughable. The Hillary Clinton has a net worth of $11 million to $53 million and that's not taking Bill into account. Yea, money buys influence do I need me to specify the corrupt one this scenario or can you figure it out yet?

This is a sad article. Sorry. We're all aware of Bernie's 'wealth' As for Jane, ever work at a university? You're talking about real people here. People we know. We've, the rest of us, shared their lives. Nothing to see here. Moving along.

Seth, will all due respect, "Sanders and Wife Steered Campaign, Nonprofit Money to Family and Friends."

'Nothing to see here.Move along'?Sure,right after the hypocracy of the Sanders family has been revealed for everybody to make up their minds about the virulent old phony.

You folks are missimg the point...no surprise.
He rallies and runs on a platform against taking Golden Parachutes then he/his wife do just that. Bernie is a hypocrit and his wife is a crook.

My understanding is that the church who does a lot of charity and poverty work for the community suffered what is est. to be $1 Million Loss(they nor the bank will speak of it, who knows there may be other Federal Investigations not known,but it is in the Exhibits of the financials of the legal documents)and most important question I have is the Federally Insured Bank took a Loss,since it's a Federally Insured Bank are Tax Payers on the Hook for that Loss? That would be no different than the Wall Street banking Loans crisis Sanders yells about. Regardless the legal papers have been filed,now we wait.I assume they will slow ball any action since Sanders is now in a campaign and it sure wouldn't sit well for any bad media for Vermont.
This matter should be addressed "Now" if Sanders wins the Nomination and his wife/him face Legal issues of Bank Fraud / Loan Fraud games over GOP wins, and takes control of Presidency,Senate,House and Possibly the Supreme Court.

University people, people we know? What does that even mean? Looks like the Sanders were making well over 300,000 dollars a year for many years and to have accumulated so little wealth is suspicious.