Deranged Central Bankers are Blowing Up the World

It is now self-evident to any sentient being (excludes CNBC shills, Wall Street shyster economists, and Keynesian loving politicians) the mountainous level of unpayable global debt is about to crash down like an avalanche upon hundreds of millions of willfully ignorant citizens who trusted their politician leaders and the central bankers who created the debt out of thin air. McKinsey produced a report last year showing the world had added $57 trillion of debt between 2008 and the 2nd quarter of 2014, with global debt to GDP reaching 286%. 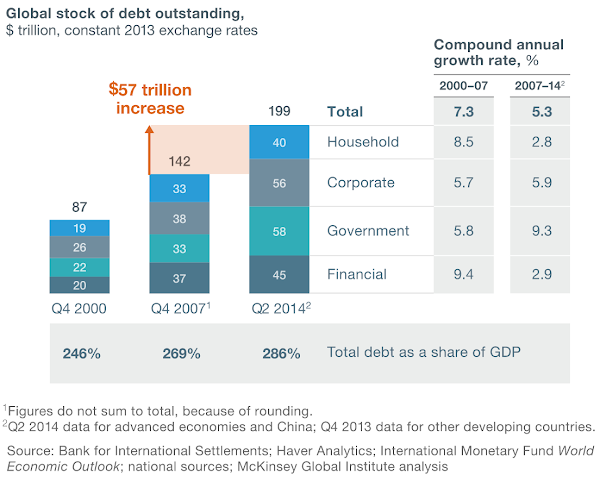 The global economy has only deteriorated since mid-2014, with politicians and central bankers accelerating the issuance of debt. These deranged psychopaths have added in excess of $70 trillion of debt in the last eight years, a 50% increase. With $142 trillion of global debt enough to collapse the global economy in 2008, only a lunatic would implement a “solution” that increased global debt to $212 trillion over the next seven years thinking that would solve a problem created by too much debt.

The truth is, these central bankers and captured politicians knew this massive issuance of more unpayable debt wouldn’t solve anything. Their goal was to keep the global economy afloat so their banker owners and corporate masters would not have to accept the consequences of their criminal actions and could keep their pillaging of global wealth going unabated.

The issuance of debt and easy money policies of the Fed and their foreign central banker co-conspirators functioned to drive equity prices to all-time highs in 2015, but the debt issuance and money printing needs to increase exponentially in order keep stock markets rising. Once the QE spigot was shut off markets have flattened and are now falling hard. You can sense the desperation among the financial elite. The desperation is borne out by the frantic reckless measures taken by central bankers and politicians since 2008.

Massive levels of debt and negative interest rates have done nothing to revive U.S., European or Asian economies. The natives are growing restless, as the early electoral success of political outsiders like Trump and Sanders substantiates. Far right parties in Europe are gaining traction as hordes of Muslim refugees overwhelm their countries. Central bankers, who formerly graced the covers of Time Magazine as saviors and heroes, are now being revealed as nothing more than glorified money printers with PhDs and no plan B.

The trillions in low grade junk bonds are beginning to go bad. The bond market is the canary in the coalmine. A tsunami of defaults is approaching the shoreline, investors are running for the hills, and deranged central bankers are telling people to come a see the colorful shells in the surf. As John Hussman points out, following their advice will be fatal.

Despite short-term interest rates being only a whisper above zero, we increasingly hear assertions that “financial conditions have tightened.” Now, understand that the reason they’ve “tightened” is that low-grade borrowers were able to issue a mountain of sketchy debt to yield-seeking speculators in recent years, encouraged by the Federal Reserve’s deranged program of quantitative easing, and that debt is beginning to be recognized as such. As default risk emerges and investors become more risk-averse, low-grade credit has weakened markedly. The correct conclusion to draw is that the consequences of misguided policies are predictably coming home to roost. But in the labyrinth of theoretically appealing but factually baseless notions that fill the minds of contemporary central bankers, the immediate temptation is to consider a return to the same misguided policies that got us here in the first place, just more aggressively.

Based on the CDS market, fear is rising rapidly and European bank stocks are collapsing faster than they did in 2008. The Too Big To Trust Wall Street banks have seen their stocks fall 25% thus far. Bank debt has fallen even faster. The lying and denials by bank CEOs sounds exactly like the summer of 2008. The most smoke is coming from Deutsche Bank, and where there’s smoke there’s fire. The papering over of billions in bad debt with more bad debt is reaching its logical and expected disastrous conclusion. John Hussman notes when credit default swaps soar, the massive level of defaults are only a quarter or two away, despite the propaganda and lies perpetuated by Wall Street to cover their asses as they scramble to escape again.

Credit default swaps continued to soar last week, particularly among European banks. Given that risks surrounding China and the energy sector are widely discussed, European banks continue to have my vote for “most likely crisis from left field.”

In the fixed income market, we wouldn’t touch low-grade credit at present. Once credit spreads widen sharply, the default cycle tends to kick in several quarters later. The present situation is much like what we observed in early 2008, when we argued that it was impossible for financial companies to simply “come clean” about bad debts, because then as now, the bulk of the defaults were still to come.

The mainstream corporate media has been assuring the masses the recent 10% to 20% plunge in stock market indexes is just a temporary hiccup and isn’t anything like the 2008 worldwide financial collapse. They’re right. The situation today is far more dire and widespread than it was in 2008. Global debt is 50% higher, rates are at zero or below, the global economy is already in recession, with war and civil chaos spreading around the globe.

There are no more rabbits for central bankers to pull out of their hats. U.S. annual deficits are headed to $1 trillion without Keynesian shovel ready stimulus packages. The Fed increased their balance sheet fivefold while creating speculative bubbles in stocks, bonds and real estate simultaneously. As John Hussman points out, the bubbles are bursting again and economic collapse is baked in the cake.

The Fed’s real policy error, as it was during the housing bubble, was to hold interest rates so low for so long in the first place, encouraging years of yield-seeking speculation and malinvestment by doing so. Put simply, the Federal Reserve has created the third speculative bubble in 15 years in return for real economic improvements that amount to literally a fraction of 1% from where we would otherwise have been.

The entire global economy seems condemned to repeatedly suffer from deranged central bankers that wholly disregard the weak effect size of monetary policy on policy targets like employment and inflation, and equally disregard their responsibility for the disruptive economic collapses that have followed on the heels of Fed-induced yield-seeking speculation.

This stock market crash in progress is following the exact pattern exhibited in prior crash periods. The market has gone nowhere since QE3 ceased and had fallen by 14% since November. The tremendous rally on Friday is nothing but the beginning of a 5% to 8% retracement of the initial loss. Once this head fake lures in more muppets, the bottom will drop out. As Hussman discusses below this crash is following the 2000 and 2007 pattern. When the 1,800 level is breached a vertical drop to the 1,500’s will happen in the blink of an eye. That will get the attention of a few 401k holders.

With regard to the stock market, I suspect that the first event in the completion of the current market cycle may be a vertical loss that would put the S&P 500 in the mid-1500’s in short order. I’ve often noted the historical signature of market crashes: a sustained period of overvalued, overbought, overbullish conditions that is then coupled with a clear deterioration in market internals and hostile yield trends, particularly in the form of widening credit spreads. See my comments from the 2000 and 2007 market peaks about the identical syndrome at those points. Historically, what we know as “crashes” have followed only after a compressed, initial market loss on the order of about 14%, a recovery that retraces 1/3 to 2/3 of the initial decline; and finally a break below that initial low. That threshold is currently best delineated by the 1800-1820 level on the S&P 500.

Not only have deranged central bankers created the conditions for a catastrophic collapse, but they have encouraged crazed sociopathic mega-corp CEOs to borrow billions to buy back their own stocks at all-time high prices. These Ivy League educated MBA lemmings have done this to boost their compensation because they are too incompetent to grow their businesses through true investment. These rocket scientists have managed to lose $126 billion on their highly leveraged stock purchases in the past three years. Some of the top losers include:

The CEOs of these companies should be fired for their idiocy, greed and ineptitude. Instead they will receive multi-million dollar bonuses. Ben Bernanke, Janet Yellen and their cohorts at the Federal Reserve have already destroyed the lives of millions of senior citizens and savers with their deranged zero interest rate policy while contributing to the wage stagnation of the middle class with their QE policy.

Janet Yellen looked like a deer in headlights last week while testifying before Congress. She realizes, along with the other central bankers around the world, their Keynesian lunacy is about to create a crisis that will make 2008 seem like a walk in the park. The coming destruction of trillions in wealth ($1.2 trillion already), along with the accelerating currency wars, and the further impoverishment of billions will ultimately lead to global war.

In short, what we should fear is not the slight impact of recent policy normalizations, but the violent, delayed, yet inevitable consequences of years of speculative distortions that are already fully baked in the cake. What we should fear are the Fed’s repeated and deranged attempts to achieve weak effects on the real economy, at the cost of speculative distortions that exact ten times the damage when they unwind. What we should fear is more of the same Fed recklessness that encouraged a yield-seeking bubble in mortgage debt, enabling a housing bubble that collapsed to create the worst economic crisis since the Great Depression. What we should fear is Fed policy that has encouraged a yield-seeking bubble in equities, debt-financed stock repurchases, and covenant-lite junk debt; that has carried capitalization-weighted valuations to the second greatest extreme in history other than the 2000 peak, and median equity valuations to the highest level ever recorded. That’s exactly what the Fed has done in recent years, and the cost of that unwinding is still ahead.

The fiat currency system, fractional reserve banking fraud, insane Keynesian fiscal policies, and consumer debt based consumption economy are mathematically unsustainable, so they won’t be sustained. The world is about to sit down to a banquet of consequences, served by deranged central bankers.