BREAKING: After hundreds of millions of dollars pointlessly torched, Jeb! ends his campaign

As I predicted back in 2014, Jeb Bush's campaign was as nonsensical as a Michael Moore advertisement for Jenny Craig. 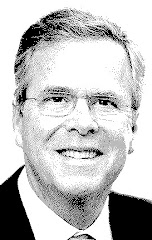 Today's results in South Carolina put the nail in the coffin:

His own mother told him not to run, and on Saturday, Jeb Bush finally caved to her political wisdom, suspending his presidential campaign after another disappointing showing in South Carolina’s primary...

...He was in a battle for fourth place here, after a sixth-place showing in Iowa and placed fourth in New Hampshire... It was a tremendous fall for a man who led in the polls last summer — only to run smack into Donald Trump...

Flashback to this very blog in 2014, when I could literally not believe that the RNC thought Jeb Bush had any chance of winning the GOP primary in 2016:

at 9:45 PM
Email ThisBlogThis!Share to TwitterShare to FacebookShare to Pinterest
Labels: Bush

This means that if I really want an antiestablishment candidate to win the nomination I have to vote for Trump. I wanted to vote for Cruz. The problem is that Bush's support will automatically go to Rubio. If Cruz drops out later he is more likely than not to throw his support to Rubio as well to make peace with the establishment. That gives Rubio the nomination. Can't have that. Voting for Trump.

What amazes me is how poorly Jeb really did. I didn't hate him, and still don't, or any other candidate. But I do hate what many of them push. I was absolutely amazed at how poorly he did. With two presidents in the family to advise, either the crew is out of touch (maybe always was), or he can't be trained. He was pulling left at every opportunity. Perhaps a ploy? A bad one. Absolutely amazed at how poorly he really did personally and at how little so many millions of dollars were for him. I think, from several sources, that he outspent everyone else in the race, on the R side anyway. As I have it, Trump has spent the least, or as of a bit ago.

As with the future, money ain't what it used to be? When he said that originally, I think they thought he was an idiot jock. And well he might have been. Or genius. Maybe he didn't even know? I realized the utility of what he said and have even found new places for it. Yeah.

"After hundreds of millions of dollars pointlessly torched..."

The key metaphor for government and those who want to ride that beast to greater personal and family glory.

When this many contenders jump into a race, most of which have no chance at all of winning, the only ones who benefit are broadcasters and people who make a living off campaigns. Millions of dollars wasted on ad campaigns, etc. The American people lose and professional campaigners/media companies win.