So many issues, so little time, which is why I am studiously avoiding any issues about Hillary other than that voice!

I am definitely not going into the terminal dishonesty thing, you know, when she told the American public, and also the parents of the murdered victims in Benghazi, that the four patriots who lost their lives to a savage Islamic attack was because of an anti-Islam video; that Wall Street and specifically Goldman Sachs is not donating to her campaign and that, according to Dick Morris, FEC reports say that Hillary has received $21.4 million from the financial and insurance industry—almost 15 percent of the total $157.8 million she raised, and she’s still trolling them for big money.”

How about that she won a smashing victory in Iowa (by six coin tosses that magically landed in her favor)?

Dozens of websites have catalogued Hillary’s lies, starting decades ago with her debut on the political scene. Also here and here and don’t miss this one. Not going there. 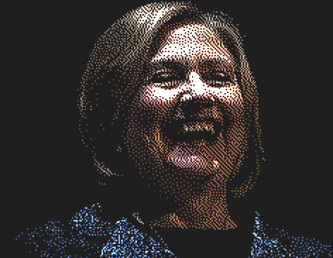 I’m definitely not going into the incompetence thing, the colossal failure of her secretly-conducted socialized-medicine initiative as First Lady, her stunning lack of accomplishments in the U.S. Senate, or, most damning, the dangerous state of the entire world under her tenure as Secretary of State, which has resulted in a chaotic, devolving Europe, saturated in Islamic-terrorism; a catastrophic Middle East, also inundated with Islamic terrorism; and the mysterious loss of six-billion dollars! Uh uh, not going there.

Also definitely not going into the crook thing, the perjury thing, the slush fund thing vis-à-vis The Clinton Foundation and the zillions she extorted—oops, accepted—from thug nations and tin-pot dictators throughout the world while, ahem, representing our country. Or the e-mail thing and the threats to our national security her fecklessness brought about, or the laughable denials, or looming Leavenworth. Not going there.

Most definitely not going into the abused-wife syndrome, the paranoid streak, the harassment and attempts to destroy the women assaulted by her, ahem, better half, or the laughable notion of her being a role model for any woman, much less the millions of American women who earned their way without the taint of scandal and criminality. Sooo not going there!

And definitely not going into Hillary’s disturbing laugh, which according to writer Elspeth Reeve, has been covered extensively. A few years ago, Reeve cited the National Journal which compiled “The Comprehensive Supercut of Hillary Clinton Laughing Awkwardly with Reporters” and The Washington Free Beacon, which created “Hillary Clinton’s Interview Tour: A Laughing Matter,” to name but two out of hundreds of articles that have covered Hillary’s aberrational trait over the years. Nope, not going there.

WHERE I AM GOING

For years I’ve wondered what that clap-your-hands-over-your-ears assault weapon is that emanates from Hillary Clinton’s mouth, specifically her wince-evoking, cringe-producing, decibel-shattering voice.

I don’t mean ear-splitting shrillness or the screech of a banshee, although God knows those are prominently featured in her vocal repertoire, but rather the shriek-like, hectoring tone that suggests that Hillary was born without the normal fluttering of the vocal cords, a function that helps to moderate speech sounds. This results in campaign speech in which every promise sounds menacing. Quite a feat!

I’m going to produce more jobs, Hillary says, get incomes rising again, make Obamacare work, improve early-childhood education, pay down student debt, fight for more abortions (oops, “defend a woman’s right to make her own health care decisions”), on and on, and yet every word comes out sounding like the patronizing, finger-wagging lecture of a screech-owl harpy.

Hillary fan Geraldo Rivera speculates that this unfortunate trait might result from a hearing loss, the kind that makes people who don’t hear very well think that other people need to be shrieked at to hear their message.

Steven Hayward from Powerline.com simply describes her pronouncements as “cackling.”

Writer Elspeth Reeve asks: why do so many people hate the sound of Hillary’s voice? “It’s just so loud and annoying. Or maybe it’s like a nagging wife…inauthentic‚and that phony Southern accent! Those flat Midwestern vowels! Whatever it is, her voice is burned into your brain.” Maybe “she sometimes SPEAKS SO LOUDLY in hopes of conveying ENERGY and FORCEFULNESS.”

Republican pollster Frank Luntz explains to Sean Hannity: “Forget the words. Listen to the way she communicates. It’s ALL AT THE SAME LEVEL…her voice turns people off. Because they feel like they’re being lectured.”

Journalist Peggy Noonan compares Hillary to an irritating landlord. “She lately reminds me of the landlady yelling up the stairs that your kids left their bikes in the hall again.”

According to writer Kathy Miller, Hillary hired a voice and drama coach, Michael Sheehan, after her last unsuccessful presidential run in 2008, paying him $7,500. Yoo hoo, Hillary, ever consider a malpractice suit?

THEN THERE’S THE AFFECT THING

A person’s emotional affect is simply the way they display their feelings. They can be manic or flat, bubbly or dour, sincere or snarky, relaxed or intense, serious or light-hearted, on and on.

Most of us fall along this spectrum. But few of us, in our travels, change our speech patterns when we go from state to state.

Not so of Hillary, who segues from high-falutin’ Wellesley girl when she’s courting East Coast donors to plantation Southerner when she’s addressing a black audience, for instance when she cited the hymn of James Cleveland: “Ah don’t feel nowhere tired….” Talk about cringe-producing!

And there, too, is old Bubba, standing behind her…stooped, skinny, wizened, looking not a little out of the loop, applauding on cue, still too narcissistic to want her to win, but still counting on her to perpetuate the gigantic Ponzi scheme they created.

Was Hillary born with that weaponized voice of hers, or did she acquire it along the way? My bet is on the latter. It’s not uncommon for people who are essentially—when all the layers of the onion are peeled back—inauthentic to appropriate behaviors of other people, the better to make themselves appear to be the real thing.

It’s as if Hillary looked around and observed how a regular person or even an animated character acts when he or she is angry or impassioned or wants to get a point across or appeal to someone, and she said to herself, “Aha, I’ll take Alec Baldwin’s anger from Column A, Ida B. Robinson’s passion from Column B, Johnny Appleseed’s ardor from Column C,” on and on, and then adopts whichever behavior fits the occasion.

But it never works, never comes across as authentic because, well, it isn’t! Hence the strangely hyena-like laugh, the hectoring tone, the weird meet-and-greet affect, and, occasionally, the bursts of raw anger—“What difference does it make?”—in which the public gets a vivid and decidedly unpretty picture of what lies beneath the phony façade.

WHERE IS THIS ALL GOING?

Looming over the entire Clinton agenda is ole genuine Bernie Sanders, grabbing the young vote, the far-left vote, the entitlement vote, the socialist and communist votes, and now we learn the woman vote, effectively telling the largely anti-Semitic world that American Democrats prefer a Brooklyn-born Jew to a female career-politician with an alienating affect, a scandal-ridden past and present, and indictments of downright treason hanging over her head,

Yes, Hillary’s dishonesty thing looms large with voters, as does her incompetence thing and crook thing and abused-wife thing and weird laugh thing,

But nothing is as predictive of her ultimate defeat as the voice thing, even though she can’t help it, anymore than someone afflicted with barnacles. Millions of people may want a woman in the White House, so much that they overlook Hillary’s Mt. Everest heights of deficits and failures. In and of itself, as even her advocates grudgingly admit, living with that voice for the next four years will compel every man in America to buy earplugs and every woman in America to wonder what the entire estrogen fetish was all about.

I predict that nothing—not the trendiest public-relations firms or the most credentialed drama coaches—will stop the American public from voting against Ms. Hillary because of that voice!

Joan Swirsky is an award winning author and journalist. Her work can be found at joanswirsky.com. Listen to an example of Hillary's lovely voice here.

Hey, hey, yea, the harridan. Please, I have been saying that too. How can any red-blooded American man watch her hector Sen Sanders w that pissed-school-marm voice of hers and not just shrivel up a little?? As a woman, I find her voice horrifying, and her cackling laugh sickening. Add her aura of haughty entitlement to the mix and instant repellant, I would think.
(Although, strangely, for me who fairly much loathes her, I give her a pass for the no where's tired thing, since she was quoting a southern poet. I love story narrators who change their voices to bring a story or poem to life)