Farley concluded that, "one could argue that Rubio’s plan would allow those convicted of some misdemeanor crimes to obtain legal residency, but Cruz’s blanket claim that Rubio “advocates amnesty for criminals who are here illegally” omits the criminal exceptions that Rubio has outlined."

Misdemeanors include all crimes punishable for not more than one year. 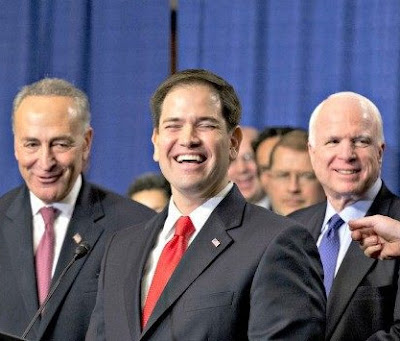 S. 744 provided legalization for aliens convicted of multiple misdemeanors - so long as the alien was convicted of them on the same day. A single act resulting in three misdemeanors wouldn't count as three separate misdemeanors under S. 744.  In one instance, you could commit 10 misdemeanors, serve 10 years in jail, and yet not be a "criminal" as long as you were convicted at the same time for all of them.

Domestic violence and assault and battery are considered only class 1 misdemeanors in some states. A single conviction in these cases wouldn't render the alien ineligible for the amnesty in Rubio's bill.

Farley points to Rubio's vote for an amendment that would have withheld legal status (and work permits) to aliens convicted of domestic violence. The amendment failed and the Senate, with Rubio's endorsement and vote, passed the original misdemeanor exemptions.

S. 744 also provided legal status and work permits to aliens engaged in identity theft (a felony crime). In fact, the bill took measures to protect the perpetrators. Rubio's bill included fines up to $10,000 for any government employee who reported instances of identity theft while reviewing applications for the amnesty.

Rubio's co-author, Chuck Schumer, helped defeat an amendment offered in committee that would have at least notified victims of identity theft when instances were discovered. "Are we going to delay [legalization]?" Schumer asked?