LYING, PARTISAN HACK-WEASELS: Which is the term CNN prefers, I hear 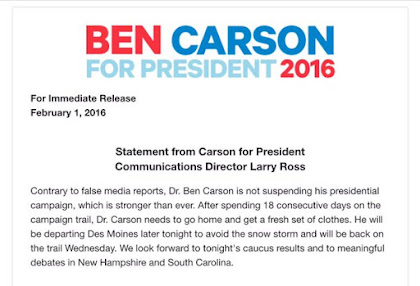 At right, a Carson press release published on caucus night

In case you have not yet figured it out yet, CNN gave the distinct impression that Dr. Ben Carson was suspending his campaign on the night of the Iowa caucus. The report was used by the Ted Cruz campaign, who disseminated the information to precinct captains.

This information was also used by anyone who happened to check the news with their mobile phone during the Iowa Caucus.

It is absurd to consider that media types like Michael Smerconish, Business Insider, Buzzfeed and others were fooled by overly ambitious Ted Cruz precinct captains who were cherry picking information from a CNN report, as alleged by CNN correspondent Chris Moody.

THIS IS HOW IT STARTED:

Carson won’t go to NH/SC, but instead will head home to Florida for some R&R. He’ll be in DC Thursday for the National Prayer Breakfast.

BREAKING: @moody has learned @realbencarson will return to FL following #IAcaucus, will not go to either NH or SC https://t.co/jl8NOY9KEx


WHICH LED TO THIS:

Carson not going to NH says @CNN? Cruz no doubt wishing he’d already packed it in, putting his IA votes in play.

So Ben Carson isn’t focusing on South Carolina after all, per @CNN, which is reporting Carson heading home to Florida.

WHICH ULTIMATELY LED TO THIS:


Despite reports, @RealBenCarson is not dropping out. He’s heading to Florida for a change of clothes and will return to the train Wed.

ALERT: Carson spokesman denies reports that @RealBenCarson is dropping out, says campaign is “stronger than ever.” pic.twitter.com/sRPCM6UWP5


@RealBenCarson is not suspending his campaign. The reports are false. https://t.co/n9aM5GpCiR

Email: “Contrary to false media reports, @RealBenCarson Ben Carson is not suspending his presidential campaign, which is stronger than ever”


Contrary to false reports, @RealBenCarson is NOT suspending his campign, but leaving the #IowaCaucus to “change clothes” & beat the weather.

The Cruz apology was not that the CNN report was used, it was that staff did not follow up with updated reports.

Dr. Ben Carson’s staff absolutely must take accountability for putting fuzzy information in the hands of CNN (namely, Chris “tick tock” Moody) in the first place, and also for not providing clarity during the caucus. If Ted Cruz supporters were able to convey media reports (as did Trump, Rubio and Paul supporters) Carson staff certainly should have been able to dispute those reports.

Oddly, this is not the first time that it had to be clarified that Dr. Ben Carson was actually staying in the race.

The most shocking thing about this entire mess is how so many have seized upon it to attack Ted Cruz, who is the only one to accept any responsibility.

Why doesn’t Ben Carson demand an apology from CNN?

Renee of Trevor Loudon's site is deep in the Führer's bunker with DENIAL.
HERE'S her excuse-making captain:

Third: blame someone else.

Fifth: take responsibility for and
apologize for the “misunderstanding”


Seems to me that Dr Carson's beef lays with CNN, not with Cruz. He has taken this situation and tried to make a much bigger deal about it, not to mention fund raised off of it.

NO, it was CRUZ's CAMPAIGN STAFF
which spead the "Carson is quitting" falsehood, NOT CNN.

They Tweeted what CNN reported on television, then CNN didn't withdraw the misreporting until 3 hours later. That's not a Cruz issue, it's a CNN problem. Carson needs to get over it or take it up with CNN.