PRESIDENTIAL HISTORIAN CRAIG SHIRLEY: The Fall of the House of Bush

That plummeting sound you hear is the fall of the House of Bush. Unfortunately for the family, it is not falling silently into the woods and there are plenty of people to hear it and witness it and, in time, kick over the dead embers of Bushism.

With Jeb Bush’s dismal loss in South Carolina comes the end of the Bush dynasty, which given the rise of President George HW Bush in 1980 (and even before with Senator Prescott Bush) as Ronald Reagan’s running mate, and later two presidencies, it lasted well over 30 years. Only the Adams’s, the Roosevelts, and the Kennedys could make the same claim as goes political dynasties

Years ago, Sports Illustrated ran a cover story on the Green Bay Packers the year after Vince Lombardi left and the team had reverted back to losing. The headline read, “A Dynasty Totters” and I recall the wistful feeling as I held that issue. Years later, I am experiencing that same sentiment even as conservatives often disagreed with the family. 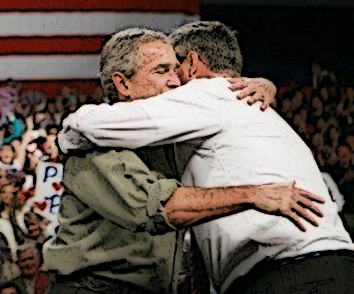 The embarrassment of the Bush family will be difficult and this is cheerless for that proud and patriotic family.

While the Bush family was smart in an Ivy League sort of way, it was never clear if they were as wise as presidents should be. It seemed as if they too often asked “Can we do this?” rather than “Should we do this?”

Ironically, it may have been Governor Jeb Bush who was the most conservative, the most affable and the most temperamentally suited to be president and had he won in 1994, things might have been radically different.

Somehow, I doubt Jeb will run again in four years if the Republicans fail to wrest the White House from the Democrats although he will still be younger than Ronald Reagan was in 1980 if he chooses to do so.

Meanwhile, Politico has been running the same old tired clichés about Bush’s now lifeless campaign such as “running on fumes” and other unimaginative phrases. They don’t see the historical significance in Bush’s unsuccessful effort.

There is great meaning in Jeb Bush’s demise. This is not simply the loss of Carly Fiorina or Rick Santorum.

Jeb’s loss is the loss of an entire culture. It means the established order is waning, the donor class of the GOP no longer holds sway, and the power no longer resides with the party committees.

It means those writers and organizations and publications and individuals who subscribed to a New World Order and Big Government Republicanism are also in steep decline. It is yet another indications that the party is returning to the federalism of Ronald Reagan, to American conservatism. The party is going back to the future.

One of those neocon periodicals recently called Trumpism a “virus” for questioning the Iraq War. Donald Trump should not have said that President George Bush “lied” but that is besides the point. The need for a debate about the war has remained unspoken out of simple party loyalty. John Kennedy once said sometimes party loyalty demanded too much. The Republican Party is overdue in having this debate.

Many Reaganites had their differences with the Bush family including 41’s tax increase along with the “kinder and gentler” rebuke of Ronald Reagan, a New World Order, and 43’s “compassionate conservatism” and nation building in Iraq and Afghanistan. Bush 43 also greatly increased federal spending and basically left a burning hole in the ground where Reagan’s conservatism used to reside. Thus the rise of the tea party movement and anti-establishmentism.

Despite party’s the turn away from Reagan some years ago, most refuse to believe that the Bush family was malicious. Oh, they were probably jealous of the affection in the party and the country for the Gipper, but that was not the prime motivator for their differing approach to governance. They simply came from a different part of the jungle, saw the world differently.

The party has now moved beyond Bushism but this was a long time coming. With each election, the Bush point total went gradually down, from 1988 to 1992 to 2000 to 2004 and now with Jeb’s gloomy performances, it is over. Along the way there were blips up but mostly down as the party became more conservative, more populist, more anti foreign adventures and yes, more anti Bush.

Governor Bush was simply caught up and crumpled in the hand of history, as the Republican Party searches once again for its soul. We’ve seen this before, in 1964 and again in 1980. The problem after 1988, when Ronald Reagan left with historically high approval ratings and a coherent and winning philosophy for the GOP, was the establishment could not resist toying with success. The GOP became a house divided against itself though it is clear what the outcome will be.

The country does not need two big government parties.

Craig Shirley is a New York Times bestselling writer, a presidential historian, a Reagan biographer and author of the new book, Last Act: The Final Years and Emerging Legacy of Ronald Reagan.

I can't agree with the premise of the article. If GHWBush had treated the economic boon he received from Reagan as an inheritance to be guarded, and kept his word about taxes, he would have been re-elected. If McCain had grown a set of Giuliani's and fought, he would have been elected. If Mit had taken off the mittens and fought, he would have been elected. It is only convenient for the author that we have arrived at a point where he can make this thought fit. More appropriately, he should be treating the Clintons as the crime family they are, for their planning has characteristically been dynastic, their politics corrupt, their self serving quest for money has known no bounds, and their perfidy has been blatant; ask the ChiComs, they invented the Dynasty.