MARK LEVIN: It's Time for Marco Rubio to Stop Lying

A little while back, I argued that Marco Rubio's tactics in attacking Ted Cruz's Senate record on immigration and national defense, among other things, were Alinskyite.  They were and still are simply and demonstrably dishonest.  Yet he persists, knowing full well that by the time the truth catches up with him, if ever, the damage will have been done.  More recently, Rubio and his campaign team have intensified and broadened their Alinskyite tactics, now focusing on the ultimate personal smear -- that Ted Cruz is a serial liar.  Even in this, Rubio is not original.  Of course, Donald Trump has been calling his opponents liars as an almost Tourette's-like response against anyone who reminds him of his past but recent support for leftists and leftist causes, some of whom and which he still embraces.

But Rubio's smears are part of a more deliberative and unrelenting propaganda campaign. They are now at the core of his campaign effort to dislodge Cruz and clear the field against Trump. 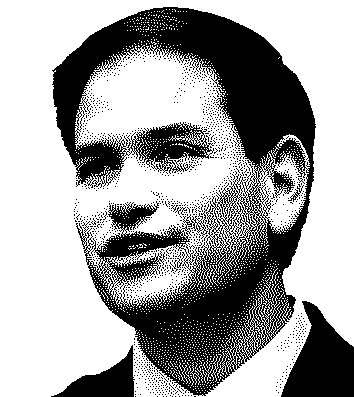 Saul Alinksy explained it this way:  “Pick the target, freeze it, personalize it, and polarize it.”  Rubio fancies himself the next Ronald Reagan.  But such self-aggrandizement is unmerited.  He's more Alinsky.  Indeed, it was Reagan who, in his 1966 race for Governor of California, declared: "Thou shalt not speak ill of any fellow Republican."  I doubt Reagan would approve of Rubio's campaign of character assassination against Cruz.  In all the years I campaigned for Reagan and worked for his administration, I cannot recall Reagan ever talking about another Republican this way.  Certainly not as a relentless propaganda campaign.

Rubio, like Trump, has difficulty explaining his past positions.  For Trump, it doesn't seem to matter.  Moreover, Trump's resort to personal attacks can be followed up with evidence of his business accomplishments.  But Rubio has no significant accomplishments other than his election to various public offices.  He has few if any accomplishments outside of politics and virtually no accomplishments in public office as a U.S. senator.  In fact, Rubio's most notorious public act was as a senator, i.e., his leading role in crafting one of the most disastrous immigration bills in modern times, in knowing violation of his pledge to the voters of Florida in his last election.  Not only has Rubio's immigration record gone from anti-amnesty to pro-amnesty to utter incoherence, but the issue of his own integrity is at stake.  Thus, he employs Alinsky's rule and accuses Cruz of what he has actually become.  He now focuses the media on his own accusations rather than his own thin record.

Campaigns are usually tough.  No question about that.  As I write this, Cruz just dropped his communications director for re-tweeting a false tweet.  Perhaps there's more to it.  Trump fired some of his staff early on.  Carson did the same more recently.  But when the candidate himself (Rubio) is the source of the Alinskyite tactics, not a staffer acting on his own, that's an entirely different matter. I had high hopes for Rubio when I was among his earliest supporters against Charlie Crist in Florida.  But I'm deeply disappointed in him, as are many who voted for him.  The growing endorsements for Rubio's presidential candidacy from establishment Republicans, most of whom cannot better articulate his accomplishments than he can, emphasize the point.

It is not too late for Rubio to reverse course.  But I doubt he will.  Polling in South Carolina shows that he (along with Trump) was successful with this tactic.

They better not push Marco on me for the R nominee, or I will stay home for the first election in my life. No more voting for the lesser evil.