Do We Really Need Four More Years of This?

Remember this infamous NYT piece on then-Senator Barack Obama in September of 2008?


...let me start the discussion by showing you this video:

In fact, as John Fund observes, Mr. Trump is far from a self-made success story. He's a rich kid who inherited a massive amount of money and managed it about as well as a passive stock fund.


Trump became president of his father’s real-estate organization in 1974. His share of his father’s empire as one of five siblings was $40 million. As the National Journal has pointed out, If someone were to invest $40 million in a S&P 500 index in 1974, reinvest all dividends, and have to pay capital gains he’d wind up with about $3.4 billion in 2015. Trump claims to be worth over $10 billion but has admitted in a 2007 deposition he frequently exaggerates his wealth. Bloomberg currently puts it at $2.9 billion, while Forbes puts it at $4 billion. So Trump’s actual wealth probably is about as much as he would have accumulated if he had taken his dad’s money and put it into an index fund.

Trump isn’t a successful businessman. He’s a rich kid who got a bunch of money from Daddy. He could have done nothing at all — no “deals,” no bankruptcies, no nothing — and gotten as much money or more as he has today.

That's not what Trump thinks, however:


“Nobody knows banking better than I do.”

“Nobody has more respect for women than I do.”

“I think I know more about foreign policy than anybody running.”

Haven't we had enough narcissistic chameleons living in the White House? 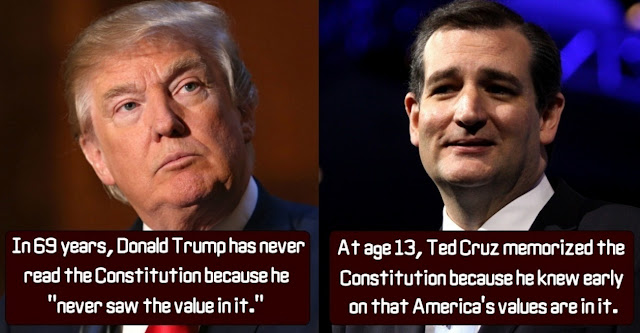 To be clear, I will support Mr. Trump if he is the nominee, because I would support Forrest Gump over a Democrat.

But wouldn't it be inspiring to have a president who actually reveres the Constitution and has since he was a youth?

So your contention is that Trump doesn't own some of the most prestigious real estate on earth having secured them in one great deal after another? That he hasn't created 10s of 1,000s of jobs?That he hasn't gone toe to toe with the toughest business people on earth? That's he's not can-do guy?

Have you read Art of the Deal? It chronicles a week in his life and he is presented with dozens of business deals daily that he has to go or pass on. And you think he's rich because he inherited millions and magically turned it into billions rather then saying he was educated from early in life to become a successful businessman, then inherited millions. You think that just parking his inheritance in an S&P Index Fund in his style?

I am not enamored with his lack of humility but unlike Obama, who hasn't done shit in his life other then take advantage of being black, good looking & articulate when reading a teleprompter, Trump has created many 1,000s of jobs, made and yes sometimes lost billions of dollars. But he knows the game because he's been playing it all his life. And you want someone that is Constitutionally astute but has worked in government all his life to manage the Executive Branch, who you think can manage it better then Trump?

Rather the the unending string of platitudes Obama rattled off ala Rubio, but was praised by the left dominated media, Trump has directly and sometimes crudely, addressed the policies that are turning this country into an unrecognizable nightmare, with solutions.

This whole piece Doug is a steaming POS. Totally unfair comparison. I know I sure as hell am going to be happy listening to someone tell me about what a great country we can be again rather them the incessant demagoguery downpour I've had to put up with for the last 8 GD fucking years.

I'm not going to build my pick up by degrading Cruz with a sizable list of WTFs because he doesn't need that-he's simply the right man for right now. He earns my vote not by process of elimination but because he's the best suited for what we need now.
MM

Trump earns my vote if he is the nominee.

It is clear he loves America and he has pledged to shut down illegal immigration. That's a hell of a good start.

With that said, it is likely the next president will name three (or four, given the news of Scalia's tragic passing) SCOTUS justices to the bench.

Any idea what kind of judge Trump would nominate?

I have no earthly idea.

I would like to restore the Constitution and the rule of law. I know what Ted Cruz will do.

We have a chance to pack the court with staunch, rock-ribbed Constitutionalists.

Wouldn't that be awesome to begin an American restoration?

Well Doug, that was impressive. Reminds me why your one of my first stops on my surfing day.

Either one would be fine with me. But for the record if they would team up together they would be unstoppable and would complement one another.

Constitutionalists with a Business man. But not necessarily in that order.

Zardoz, You credit Trump with doing things hundreds of thousands of other who came before him have done, only with no rich papa to pave the way. There is an old saying "It takes money to make money." Trump is the embodiment of that. Show me a man/woman that started with nothing and built it into something. That's impressionable.

And you seem to forget; Trump is not running against Obama. He will be running against a piano legged criminal or an aged Socialist with few notches on his legislative gun.

I am constantly amazed how people could fall for such a Kardashian candidate while claiming to be true Constitutionalist.

I just read a transcript of the debate and would have liked to seen a specific individual named by Trump to replace Scalia. I also would have liked to have the question of bailing out Puerto Rico asked. The moderator, Dickerson, is a far left asshole, and again it's beyond comprehension why the RNC allows this crap with these REgressive moderators.

That being said, Trump has said we must delay, delay, delay the nomination. I think that's a good start. And I will admit, I'd feel better if Trump had Cruz's input on his choice, actually much better. He specifically named Mike Luttig who would have been, as it turns out, a huge improvement over the traitor Roberts. So this is definitely a strong point for Cruz. I'd vote Cruz of course if he should win it but I believe Trump could run the executive branch far better.

Thanks for confirming I should
NEVER take anything you write
SERIOUSLY EVER AGAIN.

"Knowing" a body of knowledge
is a completely different matter from
WANTING TO either UPHOLD or AVOID/DESTROY it.

AND, seeing as how - between Trump and Cruz - ONLY ONE
has NOT voted to turn the Constitution on its head,
to lower the voting threshold for passage of the
ANTI-AMERICA's SOVEREIGNTY
Trans Pacific Trade Deal *
I will vote for Donald J. Trump.

You can keep your sanctimonious Holy Roller Revival Tent preacher.

* May 2015 – Cruz creates a “Fast Track” Trans Pacific trade rider to attach to TPA, which changes the vote threshold for approval/disapproval to a simple majority – thereby ensuring its passage. Cruz also votes down an Amendment requiring congressional notification prior to China/Russia joining deal.

June/July 2015 – Cruz votes against his own TPA bill, though the rider created ensures its passage.

While you point to one Cruz policy position that you have a problem with, Trump's ever-shifting positions on Amnesty for illegals, the assault weapons ban, Planned Parenthood, etc. should have you concerned.

Don't let the blog's door hit you on the ass on the way out.

But would you support a democrat over a democrat?