Sen. Marco Rubio (R-FL) is doubling down on his support for in-state tuition for illegal aliens.

On ABC, George Stephanopoulos asked Rubio about his work in the Florida statehouse in which he “co-sponsored legislation to provide in-state tuition for undocumented immigrants.” Stephanopolous asked Rubio directly: “Do you stand behind that position now?”

Rubio said that he “absolutely” stands behind that legislation:

RUBIO: It was a very narrowly drafted bill. You had to have a certain GPA, you had to live in the U.S. a long time, you had to graduate from a Florida high school. It was very narrowly tailored to high-performing students who found themselves in a situation where they were brought here by their parents when they were 5, didn’t even speak another language except English and therefore couldn’t attend college because they were being charged like they were from out of state. They still had to pay for college but they paid for what people paid when they lived in Florida. They had to be high school graduates of Florida.

STEPHANOPOULOS: So you stand behind that?

RUBIO: Yes, of a narrowly tailored bill like that, absolutely. 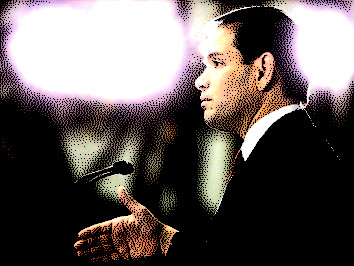 In theory, this legislation means that an American student wishing to attend a Florida state university, who is from the neighboring state of Georgia, would have to pay higher tuition costs than an illegal immigrant from El Salvador, who has been living unlawfully in Florida and attending American public schools for the past thirteen years on the taxpayer dime. Illegal aliens are also eligible for generous child tax credits, a benefit protected in the Gang of Eight bill. Indeed, the “taxes” requirement in the Gang of Eight bill would have meant illegal aliens could receive tax payments in the form of free cash from the IRS, since poor illegal aliens have no tax liability.

Rubio’s plan to discount college tuition for illegal aliens will serve as a further magnet to new illegal immigration, and will also increase competition for college slots and post-college jobs for American youth who are already struggling. Moreover, due to affirmative action policies, these illegal aliens will not have their tuition discounted but their applications given preferential treatment as well.

TRUMP: I’m opposed to it.

It is perhaps interesting to note that Chuck Todd seems a bit confused about U.S. immigration policy—illegal alien tuition discounts are for foreign-born youth who are themselves illegal immigrants. Under current policy, the US-born children are automatic birthright citizens, meaning no legislation is required to make them eligible for all the benefits enjoyed by Americans. Indeed, illegal immigrants primarily access welfare programs through their U.S.-born children. As a September 2015 report from the Center for Immigration Studies noted, “analysis shows that legal immigrant households make extensive use of most welfare programs, while illegal immigrant households primarily benefit from food programs and Medicaid through their U.S.-born children.”

Rubio’s Sunday endorsement of discount college tuition for the foreign-born illegal alien youth is in keeping with his longstanding support for DREAM amnesty proposals, which have been a passion of Gang of Eight co-member Dick Durbin.

While Rubio briefly distanced himself of his support for DREAMer amnesty in 2010 in order to get elected to the U.S. Senate—and indeed attacked attacked his opponent Charlie Crist specifically for his support of the DREAM Act—upon arriving in the U.S. Senate, Rubio quickly used his new position of power to begin working on a plan to legalize so-called DREAMers. In 2012, Rubio wrote:

“They’re not in compliance with immigration law, and, thus, not American citizens. But they are culturally as American as anyone else’s children”

Rubio’s statement might be news to Laura Wilkerson whose 18-year-old son, Joshua, was gruesomely murdered by his DREAMer classmate. In her Congressional testimony last summer, Wilkerson told lawmakers how her son was, “beaten, strangled, tortured until he died. He was tied up, thrown in a field, and set on fire… [During his trial], we had to hear this kid on the stand muttering about, ‘In my country…’ ‘In my country…’ never to finish that sentence. We listened to him tell us repeatedly that his ‘killing skills took over’.” Wilkerson told lawmakers, “You cannot you cannot stand by and ignore our families — our American families. You’re elected by Americans, not any other country. You should be for Americans.”

Yet Rubio remains so committed to amnesty for illegal immigrants who allegedly entered as minors that he has said he will not immediately revoke President Obama’s lawless 2012 executive amnesty for DREAMers. In a Spanish-language interview with Jorge Ramos, Rubio said: “Well, DACA is going to have to end at some point. I wouldn’t undo it immediately. The reason is that there are already people who have that permission, who are working, who are studying, and I don’t think it would be fair to cancel it suddenly. But I do think it is going to have to end. And, God willing, it’s going to end because immigration reform is going to pass.”

Rejected-Majority Leader Eric Cantor similarly supported Rubio’s efforts to grant amnesty to illegal immigrants. Cantor declared, “One of the great founding principles of our country was that children would not be punished for the mistakes of their parents.” This prompted Cantor’s then-primary challenger Rep. Dave Brat (R-VA) to describe Cantor’s declaration as “one of the most radical pro-amnesty statements ever delivered by a sitting representative.” Brat wrote, “In what was billed as a new agenda for the Republican Party, Cantor declared that citizenship for illegals was required by ‘the great founding principles of our country.’ With this remark, Cantor declared his support not only for amnesty now, but amnesty forever.”

Ken Palinkas, the former head of the nation’s immigration caseworkers— Citizenship and Immigration Services—has similarly explained how the DREAM Act would represents a promise of “perpetual amnesty”:

If it is improper to apply immigration law to one specific group of illegal aliens, then why should we expect future illegal aliens in this group to be treated any differently?

Indeed, government reports have documented how the 2014 illegal alien minor surge on our southern border was caused, in large part, by the promise of amnesty for alien youth.

As Senator Jeff Session has written, “It cannot be the policy of the United States that any of the 2 billion people in the world who have yet turn to turn 18 have a right to illegally enter the United States and claim residency.”

Polling data suggests that in the event Rubio’s position on this controversial DREAMer amnesty begins to receive large-scale media coverage– something that has not happened yet– it could pose problems for him in New Hamspshire, where he is currently in second place. As The Hill reported in 2014, “More people in New England oppose illegal immigration compared to the rest of the country… Nearly 80 percent of people in that region said illegal immigrants threaten U.S. beliefs and customs,” according to a Reuters/Ipsos poll.

New Hampshire also voted for Pat Buchanan in 1996 who, like Trump, is opposed to both the cheaper foreign labor and cheap foreign imports Senator Rubio has sought to import.

Conservative icon Phyllis Schlafly expressed her support for Donald Trump, declaring that he “represents everything the grassroots want.” Schlafly explained that immigration is the most pressing issue facing the country today and that “if we don’t stop immigration… we’re not going to be America anymore.” Schlafly said that, “the grassroots certainly agree with Donald Trump on most issues, but certainly on the immigration issue.” By contrast, Schlafly ruled out the possibility of a President Rubio—asserting that his “anti-American” and “dangerous” immigration agenda is too extreme to be the Party’s nominee.

Mark Warner,former inept governor of Virginia and now rubber stamp for Obama in the senate worked very hard to get in-state tuition for illegal aliens,while denying in-state tuition for the families of military members stationed in Virginia.It shows you how democrats view who matters.Now,it apparently tells us who Marco Rubio really values.If they're not here legally,they shouldn't have advantages denied lifelong American citizens.

What do you bet that el cubano pendejo will not volunteer his own money to pay for those tuitions breaks for wetbacks?

First, the jarring insertion of Trump into the dialog (had to check - yep it's Breitbart) and noted later in the article it was published before the New Hampshire primary. OK. It's well known Rubio is a supporter of amnesty since he was in the House in Florida. What I don't get is why people give him a pass on this. Second, Doug. I hated seeing this article. It only mentions Trumps take (typical Breitbart), when there is another candidate who is against this based on principle, not on what sounds good to the electorate.

Marco a Cuban Obama .. Will lie to American voters , say anything to try to get elected ..LOL no votes for this fool Rubio .. Dump The Rubio shill... Rush Limbaugh