Marco Rubio is trying to defend his unpopular effort to expand the controversial H-1B outsourcing program by claiming that he wants to protect American professionals from being replaced by low-wage foreign professionals.

In a Thursday morning radio interview, Rubio amped up the defensive claims he made at Wednesday night’s CNBC debate. Rubio said that he “proposed… reforms” that would prevent wealthy corporations from using foreign professionals as low-cost alternatives to experienced American professionals.

But Rubio’s claim is “an outright fabrication,” said Howard University’s Ron Hira, an expert on the H-1B outsourcing program. Rubio “has not included any such [anti-abuse] proposal in his bill, even though he had ample opportunity to do so.”

At Wednesday night’s GOP debate, Rubio was asked about his co-authorship of controversial legislation–- known as the I-Squared bill — that would triple the number of wage-depressing H-1B visas up to 195,000 per year. In Rubio’s home state of Florida, the Walt Disney Company used H-1Bs to lay off hundreds of American workers and force them to train their foreign replacements. Disney’s CEO has endorsed Rubio’s I-Squared bill. 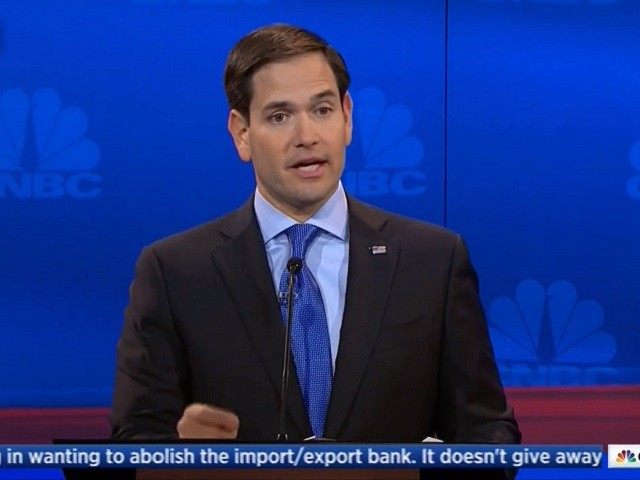 When CNBC’s John Hardwood asked about Rubio abuse in the H-1B scheme, Rubio ducked and dived:

The second thing I said is we need to add reforms, not just increase the numbers, but add reforms. For example, before you hire anyone from abroad, you should have to advertise that job for 180 days. You also have to prove that you’re going to pay these people more than you would pay someone else, so that you’re not undercutting it by bringing in cheap labor.”

The New York Times‘ Julia Preston subsequently exposed how, “neither of [Rubio’s espoused] proposals is in a bill to increase H-1B visas that Mr. Rubio, along with other senators, sponsored this year. That bill, introduced in January, does not add any new protections from the existing H-1B program… [which] has led to many Americans being displaced by foreign workers with those visas.”

Despite the fact-check, in a subsequent Thursday morning radio interview Rubio reiterated the talking point. After perfunctorily denouncing the cheap-labor practice that his own legislation further enables, Rubio said:

“Beyond that, I proposed some additional reforms. Today you’re required to advertise a job for 90 days before you can use one of these visas, I would double that to 180 days. You have to advertise this for 180 days to American workers. I’d also require that if you’re going to hire someone from abroad, it can’t be to undercut the American worker, if you bring someone in from abroad, you’d have to pay them even more than what you would normally pay for the job and that way it can’t be used as a magnet for cheap labor.”

Moreover, Rubio’s claim that there is a 90-day advertising period is also false. The H-1B does not require any type of advertisement whatsoever. “He’s totally confused,” Hira told Breitbart News, “There is no 90-day requirement for advertising.”

Each foreign professional can stay up to six years, so Rubio’s annual inflow of 195,000 H-1Bs would allow Americans companies to hire roughly 1.2 million foreign professionals in place of American professionals — doctors, accountants, therapists, designers, pharmacists, professors, managers, lawyers, reporters, architects, software programmers and engineers. The number could rise above 1.2 million, because H-1Bs that are given to non-profits, such as universities, are not counted against the annual limit.

Hira explained that Rubio has known for months about the H-1B outsourcing in Florida. However, while Democratic Senator Sen. Bill Nelson (D-FL) spoke out publicly against Disney, Rubio was silent.

The Daily Caller’s Rachel Stoltzfoos, who has covered the issue extensively, has documented how Rubio repeatedly refused to even respond to requests from media about the issue impacting hundreds of his own constituents. Before Rubio eventually broke his silence, Stoltzfoos wrote:

“When [the story first] broke… on the Disney layoffs, Rubio declined to explain why he is sponsoring the bill or to address concerns over the laid off constituents, many of whom were forced into early retirement or are still looking for a new job… [When] asked again to comment or explain his position on the H-1b program, neither Rubio’s campaign nor his Senate office responded to multiple requests.”

While Bill Nelson has called for an investigation into the H-1B program, Rubio has only worked to implement his legislation that would triple the problem.

As a Florida’s local ABC7 reporter Rebecca Vargas wrote, “As for how our two Florida U.S. Senators think about the visas — their stances couldn’t be more different. While Senator Marco Rubio wants to expand the number of H1B visas, Senator Bill Nelson wants the program investigated.”

The disconnect between the Rubio’s rhetoric and his draft legislation is not new. Donald Trump recently told Breitbart News, “Senator Rubio is incapable of telling the truth. He should be disqualified for dishonesty alone.”

Rubio’s own legislative record frequently contradicts his rhetoric. For instance, during the Gang of Eight bill, Rubio repeatedly declared that, under his bill, illegal immigrants would be ineligible for welfare– even though, in reality, citizenship would entitle them to every single welfare benefit.

Rubio frequently spoke about the need for a visa-tracking system, even though he voted against including one in his immigration bill.

Rubio said his bill would allow no amnesty until the border is secure, even though Chuck Schumer revealed that the bill would grant amnesty “on day one”– a fact Rubio later admitted in a Spanish language interview, although continued to claim the opposite in English-language interviews.

Rubio said his bill would reform the immigration system such that immigration was “merit-based,” even though, according to analysis from Sen. Jeff Sessions (R-AL), Rubio’s bill would have unleashed a flood of family-based chain migration.

Say it isn't so Joe!

Rubio is a RINO tool to fool the people. They know their numero uno Jebito is OUT, so Rubio is the backup Plan B. Don't be fooled people. Ted Cruz is the only conservative running that will truly make a change and drain the swamp.