MITCH McRUBIO: Florida Senator Won’t Use Congressional Power of the Purse to Stop the ISIS Invasion

Sen. Marco Rubio (R-FL) tells Sean Hannity that he’d “hate to use” Congress’ power of the purse to block Obama’s refugee resettlement program. He’d prefer to opt for Speaker Rep. Paul Ryan (R-WI)’s plan, which would allow the President to resettle 85,000 or more refugees this year from countries including Somalia, the Congo and Syria.


Hannity pressed Rubio on how Republicans could stop the importation of Syrian refugees into the United States.

A recent poll showed that a majority of the public opposes letting any Syrian refugees into the United States, and Rasmussen polling shows that 65 percent of conservative voters believe we should admit zero refugees from across the Middle East. Under current immigration levels the U.S. would admit 200,000 refugees and asylees from Muslim countries and will permanently resettle half a million migrants from Muslim countries over the next five years. 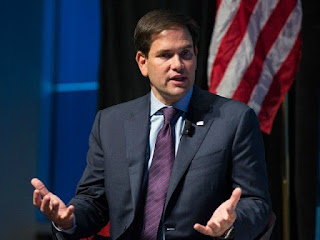 Hannity asked: “How do Republicans stop this? I know [Obama] is the Commander-in-Chief, but Congress has the power of the purse. Can it be stopped?”

It can [be stopped]. And I think part of it is the funding mechanisms that’s used, you’d hate to use that because it would impact all refugees if you did it that way. The other is, for example, the House has taken measures to make it stricter in terms of the vetting process, it would require the FBI director and other agency heads to personally attest.

Sen. Sen. Jeff Sessions (R-AL) explains that the legislation Ryan pushed through the House “allows the President to continue to bring in as many refugees as he wants from anywhere in the world.”

NumbersUSA explained how the bill would actually cede Congressional authority to the President: “instead of legislating [a] pause… the House instead will vote to cede its responsibility for America’s safety to the FBI, the DNI, and DHS in the hopes that they can pick and choose correctly from a limited number of ‘covered’ aliens.”

Ted Cruz has no problem using Congress’ power of the purse to mitigate the damage of President Obama’s disastrous policies for the next fourteen months, including his dangerous plan to bring refugees who may have been infiltrated by ISIS or al Qaida to our shores.

Cruz’s campaign also noted that the Senator has been focused on funding since September and has been calling attention to the risk of using taxpayer dollars to import terrorism. In a formal letter issued to administrative officials in September, Cruz wrote, the administration’s plan to admit tens of thousands of Syrian refugees over the next few years has “prioritized the needs of foreign nationals of unknown backgrounds, affiliations, and motivations over the safety and security of American citizens.”

Cruz stated, “Congress needs much more information before we can allow the United States to engage in a process that could wind up spending taxpayer dollars to import terrorism, much less fund that process.”

Rubio’s hesitancy to use the power of the purse to block Obama’s refugee resettlement operation also puts him on the opposite side of Senior Appropriations member Senator Sen. Richard Shelby (R-AL), who issued a joint statement with Senator Sessions which noted in part:

As Chairmen of Subcommittees on both the Appropriations and Judiciary Committees, we believe it is essential that any government funding bill cancel the President’s blank check for refugee resettlement…Each year, millions of visas go out the door without any input or action from Congress. We would not accept this policy for the federal budget, and we should not accept it for immigration. We therefore urge the inclusion of a provision in any omnibus spending bill that makes it absolutely clear that no refugee resettlement will take place without a separate, affirmative Congressional vote to authorize any resettlement and offset its huge costs… First and foremost, this is a question of appropriations.

Rubio’s position is also at odds with at least 60 House lawmakers who are urging Congress to turn down the President’s funding request and put new refugee rules in place.

In the interview with Hannity, Rubio also reiterated his support for the President’s plan to admit elderly and young refugees, who are likely to become an immediate public charge on the U.S. taxpayer:

It’s not that America’s saying, “We don’t want any refugees.” What we’re saying is, “You can’t come here as a refugee if we can’t vet you.” And all I’ve said is we are not going to be able to vet most of these people. Now common sense still applies– if it’s a six-year-old orphan, if it’s a 90-year-old senior citizen, if it’s a Chaldean priest from the Middle East—you can vet people like that, I mean, that’s common sense. But if it’s someone we know nothing about… there is no reliable data-base for us to use to vet thousands of people coming from an unstable part of the world where documents are often forged.

As Breitbart News has previously reported, Rubio’s support for admitting the young and elderly would come at a cost to U.S. taxpayers. A young refugee could require extensive childcare, medical care, housing, and food support, while the older refugee in her nineties could require round the clock medical care. If the elderly refugee dies within weeks of arrival, presumably taxpayers might have to pick up the expenses related to death and burial as well.

Moreover, Andrew McCarthy has further noted that the problem with vetting Syrian refugees is not limited to the absence of a reliable data-base of records. Rather, McCarthy argues that the problem lies with bringing in large numbers of, what McCarthy describes as, “assimilation-resistant Muslims” who can create recruiting grounds for ISIS terrorists within the United States.

Bringing in thousands of young Syrians with dead fathers is a security threat not because these young orphans are already terrorists, but because they can be recruited in the future. Recent reports documenting how Minnesota— which has the largest Somali population in the country— has struggled to stem terror recruiting seem to underscore McCarthy’s concerns.

Polls, which Hannity highlighted during the interview, reveal that Rubio’s support for continuing the refugee resettlement operation places him at odds with the majority of the American electorate— both Republicans and Democrats— on this matter. Hannity explained:

If we look at the numbers, we have 66 percent believe we are at war with radical Islamists, that’s a pretty significant number. 67 percent of Americans oppose the President’s refugee plan to bring Syrian refugees here… There was a poll by the Center for Research and Policy Study: 13 percent of Syrian refugees have at least a somewhat positive view of ISIS. [And] 50 percent of Democrats oppose the refugee crisis in the Fox poll.

Prior to the exchange with Sean Hannity, Breitbart News had reached out to Rubio’s campaign for comment. Breitbart asked specifically whether “Sen. Rubio [is] willing to call on Speaker Ryan and Sen. McConnell to block funding for refugee resettlement?”