Remembering Grandpa and all of the other heroes on Veteran's Day

The picture below is Grandpa on Guam in 1945. He was then serving on the destroyer the USS Ellet.

At right is one of his ribbon commendations after a series of actions including the Battle of the Philippines, the invasion of Guam and Saipan. 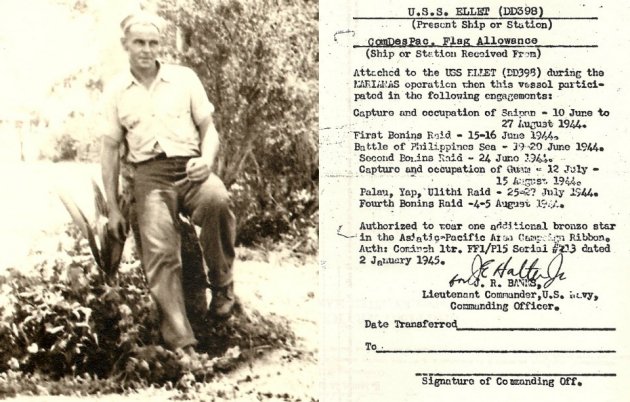 On Veteran's Day, we salute all of our veterans and active duty personnel, those who have passed on like Grandpa, and those who are still with us.

at 7:56 PM
Email ThisBlogThis!Share to TwitterShare to FacebookShare to Pinterest
Labels: Protecting America

Thank you, Frank - and my God bless all of the brave men and women who have served this country.

These were men of steel, and I thank God for giving them the strength and will to serve and to save Western Civilization.

My father was a 20mm gunner and radioman on a DD in the Pacific, that coincides roughly with your grandpop's time in service. I can't recall the hull number. He made it back home alive. My wife's grandfather was not so lucky. He died when a kamikazi struck the engineroom on his DD, the USS Butler.

We owe these men more than we could ever hope to give them!

Really? Who has been greater?

Very touching Doug-I salute all of these selfless men, my dad and uncles included.