Return of the .22 Ammo Drought?

About two months ago, for two weeks in early October, the local WalMart near to my daughter’s place in North Dallas had .22 Federal Champion ammunition available for less than five cents per round. It was in 50-round boxes, at $2.47 per box, with a limit of three boxes per customer. I checked again, on November 24th . . .

The shelves were once again empty of inexpensive .22 rimfire. There were a few boxes of CCI .22 LR shotshells at $7.87 per box. That is about 39.2 cents per round. You can easily find it for that price on the Internet. Some places are carrying it as low as 28.5 cents per round, in the 20 round box. The price for CCI .22 LR shotshells is the same in that WalMart as it was in early October. 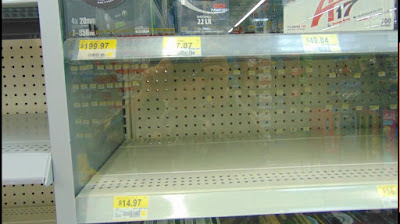 A number of significant events have occurred since the middle of October, any one of which could cause a resurgence in demand for .22 LR ammunition. The rampage shooting in Colorado, the increase in knife attacks in Israel, the jihadi attack in Paris, calls for more gun control in the United States, and President Obama’s statement that he will push hard for more gun control in his final year in the big chair.

All of those things make people who believe that they don’t have a sufficient stock of .22 ammunition for potential bad times, increased federal legal restrictions, or who may face extra burdens placed on them by local governments, have reason to buy some more ammunition. This keeps the demand high.

Component costs of ammunition have dropped tremendously. Lead and other metal prices are down; oil and other feedstocks for making gunpowder are down. The price of a 12 gauge shotgun shell, which uses more than 10 times the components of a .22 cartridge (ll times the lead, 20 times the gunpowder, a separate wad, and intricate primer that the .22 does not need) is commonly available for 22 cents a round.

If demand were to drop, there is reason to believe that .22 ammunition would be available at about 3 cents a cartridge. I purchased bulk .22 (Federal Champions) for just over 3 cents a round in 2012. At that point, oil prices and metal prices were much higher than they are now.

It is clear that political fears are sustaining the .22 LR bubble. .22 LR is available, but you have to hunt to find it for less than 8 cents a cartridge. There was plenty of .22 available in Sprague’s, a local gun store in Yuma. But most of it was at 10 cents a round, or more.

All of the Democrat candidates have indicated that they wish to install new, stricter gun control measures. We may have to wait until a Republican President is elected and in office before the demand for .22 LR drops enough to bust the .22 LR ammunition bubble.