Sen. Ted Cruz (R-TX), who received widespread praise for his Tuesday debate performance in which he slammed the media for its biased coverage of immigration, continued his verbal broadside against pro-amnesty special interests on today’s program of the Laura Ingraham Show. 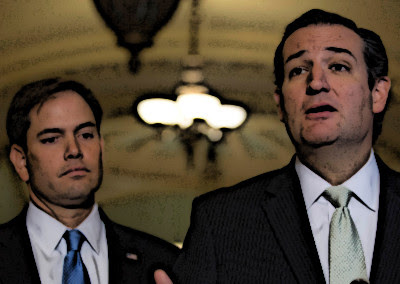 Cruz explained that in this “epic battle,” Rubio stood opposed to Jeff Sessions, talk radio, and the American citizenry: “All the folks on the other side dismissed it, said we were wrong-headed and anti-immigrant for believing we should actually secure the borders. I have a deep and genuine disagreement with that view, so I’ve got to say, as a voter, when politicians are saying the exact opposite of what they’ve done in office, I treat that with a pretty healthy degree of skepticism.”

Cruz told Ingraham that while the American people expressed their vociferous opposition to Rubio’s immigration bill, Rubio ignored their concerns and fought “tooth and nail” to push amnesty and immigration expansions upon the unwilling electorate. Cruz explained that even though “The American people quite reasonably said, ‘No” to the Gang of Eight’s plan, Rubio and his fellow Gang of Eight colleagues continued to push the amnesty bill through Congress:

The Gang of Eight– they fought tooth and nail to try to jam this amnesty down the American people’s throat. Over and over and over again. And it was only because you [Laura Ingraham] spoke out, Rush spoke out, Mark Levin spoke out, Sean Hannity spoke out, and Jeff Sessions.

Rubio himself acknowledged that he was voting for the bill despite the vocal opposition of conservatives to his plan. In 2013, just before the bill’s passage, Rubio took to the Senate floor to deliver his most passionate address yet in favor of passing the Pelosi-endorsed measure. In his speech, Rubio mentioned the overwhelming opposition to the bill from many of his constituents.

I have received numerous emails and calls from conservatives and Tea Party activists from across the country regarding immigration… I share [their] skepticism about this administration and Washington in general… The proposal before the Senate is by no means perfect… But it also has important reforms conservatives have been trying to get for years… I hope you will understand that I honestly believe it is the right thing for our country… In my heart and in my mind, I know that we must solve this problem once and for all.

Regardless of the “numerous calls and emails from conservatives… across the country,” Rubio voted for the Reid-backed bill, and was the face of a media campaign designed to grease its passage through Congress.

During the Gang of Eight “battle,” Cruz explained, Rubio voted against his conservative colleagues’ repeated efforts to improve border security.

Cruz explained that he and his colleagues offered several conservative enforcement amendments, but that Rubio “opposed every single one of them. Every single amendment.” Cruz said:

Cruz’s declarations had been substantiated by reports from establishment media at the time.

As The Washington Post reported, Rubio and the rest of the Gang of Eight colluded with Schumer and Durbin to ensure that no meaningful changes proposed by conservatives were ever adopted:

The eight met in private before each committee hearing, hashing out which amendments they would support and which oppose as a united coalition. Senate aides said amendments were rejected if either side felt they would shatter the deal.

On the floor, Thune (R-SD) offered an amendment to required the completion of a double-layer border fence. Sen. Rubio joined all members of the Gang in voting down Thune’s amendment. Rubio similarly joined the group to vote down an amendment offered by Sen. Vitter (R-LA), which would require the implementation of an exit-entry tracking system. Rubio even voted down Chairman Grassley’s amendment that would put enforcement before amnesty – even as Rubio was pledging that he wanted enforcement first. Rubio even voted for the bill after Sen. Chuck Grassley’s amendment was defeated, which would have prevented the Schumer-Rubio bill from granting amnesty to gang members. Moreover, for months Rubio put off meeting with Immigrations and Customs (ICE) enforcement officers to get their input on the bill. Eventually, right before the bill was dropped, Rubio finally did meet with the ICE Officers’ President Chris Crane and promised him he would fix the bill. But Crane says that Rubio did no such thing– accusing Rubio of lying to immigration enforcement officers about the contents of his bill:

Senator Rubio, who promised ICE officers and Sheriffs that he would take steps to repair the bill’s provisions that gut interior enforcement, has abandoned that commitment. He directly misled law enforcement officers… Senator Rubio left unchanged legislative provisions that he himself admitted to us in private were detrimental, flawed and must be changed… As a result, the 1,200 page substitute bill before the Senate will provide instant legalization and a path to citizenship to gang members and other dangerous criminal aliens, and handcuff ICE officers from enforcing immigration laws in the future.

Rubio voted for this final amnesty bill even though he pledged to Rush Limbaugh he would not support a bill that granted amnesty prior to securing the border. Rubio declared: “If there is not language in this bill that guarantees that nothing else will happen unless these enforcement mechanisms are in place, I won’t support it.” To this day, Rubio has never publicly apologized for violating the pledge he made to Rush Limbaugh and his millions of listeners.

Rubio voted for this final amnesty bill even though he promised Sean Hannity: “I don’t think any of that [amnesty] begins until we certify that the border security progress has been real. That a workplace enforcement mechanism is in place. That we are tracking visitors to our country, especially when they exit.”

Reports from The Washington Post, National Review, The New Yorker and many others have all documented how it was Rubio’s job during the Gang of Eight “battle” to sell the bill to conservatives. As Bob Menendez told the New Yorker, it was Rubio’s job to “neutralize” conservative opposition and in some cases, “proselytize” to them. Even the most ardent opponents of President Obama, the Washington Republican establishment, and immigration amnesty were, at first, swayed by Rubio’s factual misrepresentations about his bill. As the Tampa Bay Times writes:

[Mark] Levin, who uses ‘amnesty’ like a four-letter word, said on his Nov. 8 show that Republicans were ‘race pandering… sound stupid and look stupid’ and ‘surrendered to the left’s arguments and their agenda.’ So how did he react when Florida Republican Sen. Marco Rubio phoned in Wednesday to pitch his immigration ideas? ‘This is very fascinating to me,’ Levin said, barely probing the concept, including how millions of illegal immigrants would someday be eligible to seek citizenship. After Rubio hung up, Levin called him a ‘very, very impressive man.’ […] Rubio had turned a lion into a lamb.

When asked for comment, Rubio’s spokesman directed Breitbart News to the Senator’s remarks in front a media gaggle in South Carolina today. Rubio told reporters that he and Cruz hold similar positions on immigration because they both want “massive expansions’ in immigration:

Ted is a supporter of legalizing people that are in this country illegally. In fact, when the Senate bill was proposed, he proposed legalizing people that were here illegally. He proposed giving them work permits. He’s also supported a massive expansion of the green cards. He supported a massive expansion of the H-1B program, a 500% increase. So, if you look at it, I don’t think our positions are dramatically different. I do believe that we have to deal with immigration reform in a serious way, and it begins by proving to people that illegal immigration is under control.

However, in today’s interview, Cruz took a stand against expanding immigration. By contrast, Rubio recently introduced legislation which would substantially increase immigration. According to Pew, 9 in 10 Republican voters would like to see future immigration rates reduced. In recent months, has expressed his support for expanding refugee resettlement, he has introduced brand new legislation backed by his Silicon Valley supporters to massively increase the number of wage-cutting H-1bs and Rubio has also admitted that he would continue the President’s unconstitutional DACA amnesty. When Rubio states that Cruz “proposed giving [illegal immigrants] work permits” he is referring to the fact that Cruz offered an amendment that sought to strip citizenship for illegal from Rubio’s bill. While Cruz has never introduced legislation that would provide amnesty for illegal immigrants and would increase immigration, Sen. Rubio’s Senate career is largely defined by his partnership with President Obama to do just that.

Moreover, with regards to the H-1B visa specifically, Rubio’s statement suggests that while Cruz took a stand against expanding the wage-depressing H-1B program, Rubio told reporters that, for his part, he supports “a massive expansion of the H-1B program”– despite the fact that the H-1B visa program has abused in his home state of Florida. Disney laid off 250 of Rubio’s constituents and replaced them with low-wage foreign workers on H-1B visas.

When Ingraham asked Cruz whether he wanted to increase the number of foreign workers imported into the United States, Cruz said, “I don’t believe that’s a good idea.”

Ingraham pressed again, “On that issue of legal immigration, as President of the United States, you will not push to increase the number– certainly to this extent— of the high tech workers or the legal immigrants… that is not what you will be efforting as President.”

“That’s correct,” Cruz said, “And let me say, on the H-1B issue… we have seen serious abuses and serious allegations of abuses by major companies– one after another. You and I have talked about them before. And I have to say that as each report becomes public, it has gotten more and more troubling, and I have been deeply troubled.”

While Marco Rubio has worked with Silicon Valley on new legislation to triple the number of H-1B visas to drive down wages and replace American workers, Cruz announced on Ingraham’s show that, “I am working very, very closely with Jeff Sessions to introducing legislation to fundamentally reform the H-1B program to prevent these abuses. I am very troubled by these abuses.”

Breitbart News subsequently reached out to Sen. Sessions office. Sessions is the Chairman of the Senate Subcommittee on Immigration and the National Interest and the leading advocate for protecting American workers from H-1B abuse, as well as the chief critic of the Rubio-backed I-squared bill.

Sessions’ office confirmed to Breitbart News that they are working with Ted Cruz on H-1B reform and further added that they are grateful for Sen. Cruz’s aggressive fight against the Gang of Eight “open borders” plan.

Marco Rubio is the GOPe's and Rove's "Plan B" since they now finally realize that Jeb Bush will not win the nomination. Rubio is as RINO as it gets. Ted Cruz is the ONLY true constitutional conservative candidate. Marco Rubio is the typical, slick tongued con artist (reminds me of Obama) and is trying to trash Cruz by lying about his support of illegals. Ted Cruz voted AGAINST the Gang of Eight bill and Marco Rubio voted FOR it. That's all you need to know.