THE RISE OF ISLAM IN EUROPE: Infantile Government

One of the most surprising aspects of the terrorist attacks in Paris on Friday night is how "deeply shocked" members of the European political establishment appeared to be.

Angela Merkel, David Cameron and the Pope all expressed their condolences -- and "deep shock" -- at the well-coordinated, citywide terror attacks in six different places across Paris, which as of this writing have claimed at least 128 lives and more than 200 wounded. French President François Hollande confirmed that Islamic State terrorists perpetrated the attacks, carried out with suicide bombings, hand grenades and assault rifles. According to witnesses, terrorists were heard yelling, "Allahu Akbar" ['Allah is the Greatest"] and "this is for Syria" as they shot into the audience at the Bataclan Theater, where a rock concert was underway.

Although the writing has literally been on the wall in blood for the past decade and a half, the West, especially Europe, continues to be taken aback every time a new terror attack occurs, as if each one were the first.

After 9/11 in the United States; the 2004 Madrid train bombings, which killed nearly 200 and wounded 2000, and the 2005 attacks on London's transit system where 56 people were killed and 700 wounded, world leaders have no conceivable excuse left to be shocked and surprised at mass terrorism occurring in the midst of Western capitals. 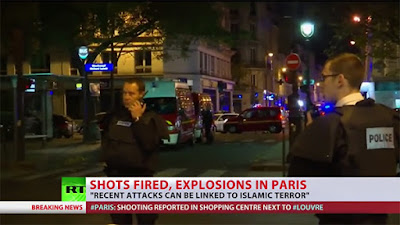 As recently as a month ago, Andrew Parker, director-general of Britain's MI5, said that the terror threat to the UK was at its highest level in more than three decades and "growing." British police and intelligence agencies have intervened to foil six terrorist plots in the past year alone. "That is the highest number I can recall in my 32-year career, certainly the highest number since 9/11," he said. "It represents a threat which is continuing to grow, largely because of the situation in Syria and how that affects our security."

Instead of Britain, these attacks happened in France. They could have happened in Germany, where police revealed the arrest of a man whom they believe may be connected the Paris attacks. Recently, the Welt Am Sonntag newspaper cited intelligence warnings that "the integration of hundreds of thousands of illegal migrants Germany is no longer possible in light of the number and already existing parallel societies." "Parallel societies" refers to Muslim communities that have little or no contact with the rest of the society in their host countries. According to an intelligence document obtained by Welt am Sonntag, "We are importing Islamic extremism, Arab anti-Semitism, national and ethnic conflicts of other peoples, as well as a different understanding of society and law." Most ominously, however, the intelligence document went on to say that "German security agencies ... will not be in the position to solve these imported security problems and thereby the reactions arising from Germany's population."

Already in February, it was reported in several European newspapers, among them the British Daily Telegraph, that ISIS threatened Europe with an influx of 500,000 migrants, which would include ISIS operatives hiding among them, to create chaos on the continent.

Astoundingly, European leaders nevertheless allowed the current wave of migrants to flood into their countries. Many of these migrants hide underground, often in the suburbs with these "parallel societies;" with European authorities unable to account for their whereabouts.

In September, a Syrian ISIS smuggler told the British daily, The Express, that more than 4,000 covert ISIS gunmen had been smuggled into Western nations, and were "ready" across the European Union. He also said that the undercover infiltration was the beginning of a larger plot to carry out attacks in the West, allegedly in retaliation for the US-led coalition airstrikes against ISIS.

In September, Lebanon's education minister, Elias Bou Saab, estimated that thousands of ISIS "radicals" were among the 1.1 million Syrians currently in refugee camps. He predicted that one in 50 migrants are members of the terror organization. Although at the time, the minister admitted that he had no solid information on the infiltration of refugees, he said, "My gut feeling is ISIS are facilitating an operation. To go to Europe and other places."

The terrorist attacks in Paris are the direct and deplorable result of political cowardice and inertia. Politicians are unable or unwilling to name the problems by their rightful name. The politicians have been shying away from engaging with the enormous security and social problems that Muslim immigration into Europe and the West has caused and continues to cause.

In the face of the Islamic terrorism that the West has been experiencing for more than a decade. The current generation of European political leaders has exhibited an irresponsibility and lack of leadership that is almost infantile by allowing unchecked Muslim immigration into Europe, with its free, open borders. The question is whether the terrorist attacks in Paris will finally amount to a wake-up call for the West's political establishment.

Read more at The Gatestone Institute.