IN THE AFTERMATH OF PARIS: Only One GOP Candidate Prepared to Handle our Open Borders Nightmare

Immigration occupied little time in the three hours of debate on the Fox Business channel on Tuesday night.

But afterwards, Fox said immigration was the No. 2 issue that Facebook users wanted to talk about during the debate (taxes were No. 1).

And one eruption of disagreement over amnesty provided one of the most talked-about segments of the night. 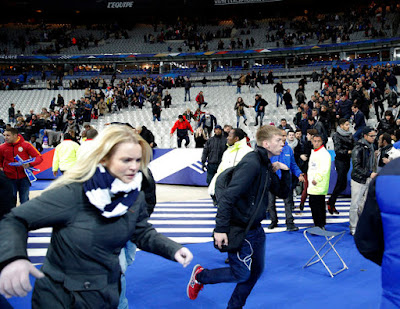 In a debate night devoted to economics, only Ted Cruz treated immigration as an economic issue that can harm the lives of ordinary American wage-earners. He surprised me by -- for the first time in my memory -- showing some real passion about the millions of working men and women whose wages and employment opportunities are limited by uncontrolled immigration.

And Cruz single-handedly stopped a pro-amnesty wave from swamping the debate stage through John Kasich and Jeb Bush.  At the moment it looked like the GOP establishment was winning back the presidential contest for its long-time pro-amnesty crusade, Cruz forcefully declared that if the Republican Party becomes a party of amnesty it will lose.

But for Republicans to convince enough wage-earners to give them the votes to win, they will have to do more than oppose amnesty and will have to talk more like Rick Santorum usually does and like Cruz did tonight about the economic benefits of less competition from foreign workers.

The only reference to immigration during the first debate was when Gov. Huckabee was asked about his stance on not accepting Syrian refugees.

“…But, the idea that we're just going to open our doors, and we have no idea who these people are -- what we do know is that only one out of five of the so called, "Syrian Refugees", who went into Europe were actually Syrian. Many of them, we had no idea who they were. They weren't Syrian.

Are we going to open the doors so that the ISIS people will come on in, and we'll give them a place to say, and a good sandwich, and medical benefits? My gosh, we have $19 trillion dollars in debt, we can't even afford to take care of Americans…

So, let's do it where we can best help them. Send them some food. But, let's ask the Saudi's to step up. I'm really tired of Americans being the only ones asked to do all the heavy lifting when it comes to charity, and, quite frankly, my number one concern right now is taking care of the fact that Americans are taking it in the gut without jobs. Many of them working two and three part time jobs. And, if America wants to do something great, let's get our economy growing again, stabilize the dollar, and we'll be in a much better position to help people around the world.”

It began when Trump was asked about his thoughts on the Fifth Circuit Court upholding the injunction against Pres. Obama’s 2014 executive action amnesty.

“I was so happy yesterday when I saw that decision come down. That was an unbelievable decision.


And we don't have enough of those decisions coming down. He of the executive order, because nobody wants to listen to him, including the Democrats, so he just goes around signing executive orders. That was a great day. And, frankly, we have to stop illegal immigration. It's hurting us economically. It's hurting us from every standpoint. It's causing tremendous difficulty with respect to drugs and what that does to many of our inner cities in particular…

“But if people think that we are going to ship 11 million people who are law-abiding, who are in this country, and somehow pick them up at their house and ship them out of Mexico -- to Mexico, think about the families. Think about the children.

So, you know what the answer really is? If they have been law- abiding, they pay a penalty. They get to stay. We protect the wall. Anybody else comes over, they go back.

But for the 11 million people, come on, folks. We all know you can't pick them up and ship them across, back across the border. It's a silly argument. It is not an adult argument. It makes no sense.”

“Twelve million illegal immigrants, to send them back, 500,000 a month, is just not -- not possible. And it's not embracing American values. And it would tear communities apart. And it would send a signal that we're not the kind of country that I know America is.

And even having this conversation sends a powerful signal -- they're doing high-fives in the Clinton campaign right now when they hear this. That's the problem with this. We have to win the presidency. And the way you win the presidency is to have practical plans. Lay them out there. What we need to do is allow people to earn legal status where they pay a fine, where they work, where they don't commit crimes, where they learn English, and over an extended period of time, they earn legal status. That's the path -- a proper path...”

As the moderators tried to stir the conversation away from the immigration issue Sen. Cruz brought it back to show that immigration policy plays a significant role in the economy, especially on American worker’s ability to find jobs and their wages.

“The democrats are laughing -- because if republicans join democrats as the party of amnesty, we will lose.

And, you know, I understand that when the mainstream media covers immigration, it doesn't often see it as an economic issue. But, I can tell you for millions -- of Americans at home watching this, it is a very personal economic issue. And, I will say the politics of it will be very, very different if a bunch of lawyers or bankers were crossing the Rio Grande.

Or if a bunch of people with journalism degrees were coming over and driving down the wages in the press.

Then, we would see stories about the economic calamity that is befalling our nation. And, I will say for those of us who believe people 'ought to come to this country legally, and we should enforce the law, we're tired of being told it's anti-immigrant. It's offensive.

I am the son of an immigrant who came legally from Cuba...

...to seek the American dream. And, we can embrace legal immigration while believing in the rule of law -- and I would note, try going illegally to another country. Try going to China, or Japan. Try going to Mexico. See what they do. Every sovereign nation secures its borders, and it is not compassionate to say we're not going to enforce the laws...

...And we're going to drive down the wages for millions of hardworking men and women. That is abandoning the working...” (APPLAUSE)

In response to the question of how he would handle the Syrian refugee crisis, Gov. Bush said the best solution was to help the refugees in the Middle East instead of bringing them to the U.S.

We should have a no fly zone in Syria. We should have a support for the remnants of the Syrian Free Army, and create safe zones. If you want to deal with the four million refugees that are leaving Syria because of the devastation there, then we 'ought to create safe zones for them to stay in the region rather than go to Europe. And, that requires American leadership.