Singer was a major financial force behind the Rubio-Obama amnesty and immigration expansion push in 2013.

As Politico reported at the time, Singer “quietly go[t] involved in the fight for immigration reform, making a six-figure donation… to the National Immigration Forum”— a George Soros-backed organization that lobbied for Rubio’s legislation to issue 33 million green cards to foreign nationals in the span of a single decade. The announcement of Singer’s endorsement highlights an intra-party tension that has emerged with new strength since Rep. Paul Ryan (R-WI)’s inauguration as Speaker of the House. 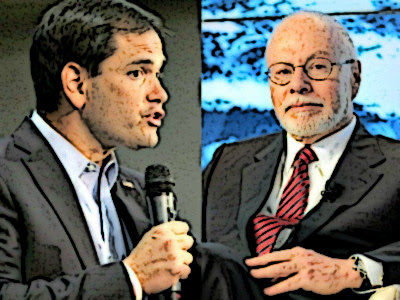 There is a growing chasm between the more than 9 in 10 GOP voters, who want to see future immigration rates cut, versus GOP donors that are desperately seeking to install leaders in the White House and Congress who will further expand the nation’s already record breaking immigration rates that are transforming the country’s economy and electorate.

Upon the announcement of the Singer’s decision, GOP frontrunner Donald Trump tweeted:

I see Marco Rubio just landed another billionaire to give big money to his Superpac, which are total scams. Marco must address him as ‘SIR’!

Even though Rubio’s donors stand to make an enormous profit from a surge of low-wage migrant labor, Rubio has repeatedly denied that his wealthy backers have influenced his agenda. “People buy into my agenda. I don’t buy into theirs,” Rubio has said.

However, a review of several of Rubio’s top donors reveals that many of them have benefited from the Floridian’s rise to power.

Perhaps one of the most widely-criticized areas of Rubio’s campaign pledge to create “A New American Economy” on migrant labor is his support for tripling the controversial H-1B visa program.

Throughout his brief time in Washington—noted primarily for pushing the La Raza and Obama-backed amnesty bill through the Senate—Rubio has co-authored two pieces of legislaton that would massively expand the wage-depressing H-1B visa program used to replace American workers in white-collar jobs. His most recent bill—known as I-Squared—would triple the number of H-1B visas imported into the United States despite the fact that the U.S. Census Bureau reports 3 in 4 Americans trained in Science, Technology, Engineering, and Math (STEM) are not employed in those fields. The Walt Disney Company used H-1Bs to lay off hundreds of American workers and forced them to train their low-wage foreign H-1B replacements. Disney’s CEO has endorsed Rubio’s I-Squared bill.

Trump, who has called on Disney to hire back all of Rubio’s laid-off constituents, thundered:

Lobbyists write the rules to benefit the rich and powerful. They buy off Senators like Marco Rubio to help them get rich at the expense of working Americans by using H-1B visas–so called “high tech” visas–to replace American workers in all sorts of solid middle class jobs… Senator Rubio works for the lobbyists, not for Americans. That is why he is receiving more money from Silicon Valley than any other candidate in this race. He is their puppet.

Behind Goldman Sachs, Microsoft is the second largest contributor to Rubio’s campaign committee since 2011, donating $33,100. Similarly, Microsoft is the 12th biggest user of the H-1B program, having brought in 1,048 foreign workers on H-1Bs in 2013. Last year, Microsoft announced its plans to lay off 18,000 workers at the same time the company was lobbying to increase the H-1B program, prompting strong condemnation from U.S. Senator Sen. Jeff Sessions (R-AL), a top opponent of Rubio’s H-1B expansion plan.

Morgan Stanley has also been one of Rubio’s top financial contributors— having donated $47,564 to Rubio throughout his career. Morgan Stanley is the ranked 66th among the biggest H-1B users.

Larry Ellison, the founder and executive chairman of the Oracle Corporation, has been another one of Rubio’s financial boosters. In July, the WSJ reported that Ellison gave $3 million to the pro-Rubio super PAC. In June, Ellison hosted a $2,700 per-person fundraiser for Rubio. Oracle is the 20th biggest users of H-1B and has endorsed Rubio’s Gang of Eight and I-Squared immigration bills.

Beyond the controversial H-1B expansions, however, critics allege that Rubio’s donors have benefited in other ways from his immigration legislation. For instance, according to open-secrets, Carnival Corporation is one of the top 20 contributors to Rubio’s campaign committee since 2011, having donated $14,500.

According to the Federation for American Immigration Reform, Section 4606 of the Rubio-Obama immigration bill included a “backroom deal” that, “creates a new nonimmigrant Z visa to admit individuals who possess ‘specialized knowledge’ to perform maintenance on airlines and cruise ships” in place of American labor. Rubio’s top immigration lawyer during the Gang of Eight push was Enrique Gonzalez. Prior to working for Rubio, Gonzalez had formerly made his living, in part, by bringing foreign workers into the country on behalf of large corporations. Gonzalez had been a partner at the nation’s largest immigration firm Fragomen, where, as Bloomberg reports, “he helped Carnival, Viacom, and other companies obtain visas for their foreign workers.” Gonzalez features this Bloomberg article on his profile on Fragomen’s website.

Yet beyond Rubio’s legislative action on immigration, reports document how Rubio’s donors may have shaped many more of his policy platforms.

For instance, according to OpenSecrets, Fanjul Corporation is the fourth biggest contributor to Rubio’s campaign committee since 2011, donating $25,200. The Fanjul family has boosted Rubio throughout his career. As Yahoo Finance’s Rick Newman reports, the Fanjul’s sugar empire “includes Domino and Florida Crystals… Donors associated with Florida Crystals have given Rubio at least $81,100 since 2009.” The Washington Post has described Jose “Pepe” Fanjul as part of Rubio’s “inner circle”: “Over the years, Fanjul has played a key role in raising money for Rubio and introducing him to well-heeled donors.” In April, the Fanjuls hosted a fundraiser in Palm Beach for Rubio. The cost of attending the reception and lunch was $2,700. Rubio’s closeness with the family has been well-documented, as The Daily Caller’s Joanne Butler notes, “It’s been reported that one of the first people Rubio greeted after making his presidential campaign announcement was Pepe Fanjul, Sr.”

The Fanjul family benefits from the federal government’s policies that protect of the sugar industry. The Daily Caller writes these protections have come at a cost to Americans:

While the Fanjul family has reaped the benefits of a protected sugar industry, other Americans have paid a price in lost jobs… What we have is a special interest group with lots of political muscle to protect its industry – to the detriment of 120,000 U.S. jobs lost over the past fifteen years.

Multiple reports have documented how the Fanjuls may have influenced Rubio’s votes. For instance, the Washington Post has described Rubio as a “major player” and one of sugar industry’s “names to know”.

Rubio, an outspoken defender of the sugar program… courted the Fanjul family during his 2010 Senate campaign. In his 2012 memoir, “An American Son,” Rubio credited a Fanjul fundraiser on Labor Day weekend in 2009 for helping him surpass a critical early fundraising goal. This year, 60 supporters paying $10,000 each gathered on the terrace of Pepe Fanjul’s Palm Beach home to toast Rubio.

“The Fanjuls might be considered the First Family of Corporate Welfare… they benefit from federal policies that compel American consumers to pay artificially high prices for sugar,” says a report by Time Magazine’s Donald Bartlett and James Steele.

While Rubio’s campaign rhetoric decries corporate welfare, he does not seem to mind it when it comes to the Fanjuls. As the Washington Examiner has observed, “In June 13, 2012, Rubio cast a very odd vote: he voted to save the indefensible federal sugar program… [It’s] relevant that the biggest sugar family in Florida, the Fanjuls, was supporting Rubio early in his long shot Senate race in 2010.”

The news of Singer’s endorsement may bring Rubio additional endorsements. Another donor Rubio has actively courted is Sheldon Adelson, CEO of the Las Vegas Sands Corporation. Reports have questioned whether Rubio’s support for Sheldon Adelson’s bill to stop Americans from gambling online was intended to woo the GOP megadonor.

“Rubio signed on as a co-sponsor of the bill… raising eyebrows and prompting questions from reporters,” the Washington Post wrote. “The Florida senator has assiduously courted the billionaire casino mogul.”

Shortly after the news broke that Adelson was considering endorsing Rubio, Trump declared, “Sheldon Adelson is looking to give big dollars to Rubio because he feels he can mold him into his perfect little puppet. I agree!”

Adelson stands to benefit financially from Rubio’s policy of expansive immigration as well. Indeed, Nevada has the largest share of illegal immigrants of any state in the country (4.7 percent), and roughly one in five Nevada residents is foreign-born.

In a recent piece in New York Magazine, Jonathan Chait writes that Rubio is the candidate best positioned to enact the donor-class agenda. Chait writes: “Rubio has carved out a valuable niche in the Republican field as the candidate who will carry out the agenda of the party’s donor base, but who has the identity and communication skills to sell that agenda more effectively.”

Rush Limbaugh has similarly warned that “the donor-class push” is to “get rid of Trump, and have Rubio or Jeb win the White House.”

Limbaugh predicts that, with Paul Ryan as Speaker and Rubio as President, in the “first 12-to-18 months, the donor-class agenda [will be] implemented, including amnesty and whatever else they want.”