It is now clear that the US Government, for the most part is unable and, in some cases, refuses to protect Americans from external and internal threats to our security, whether that be through unregulated immigration, an impotent ISIS policy or the disarming of law-abiding citizens.

Under the Obama Administration's leadership, elements of the radical left such as Black Lives Matter have joined forces with the Islamist-supporting groups the Islamic Society of North America (ISNA), the U.S. Muslim Brotherhood and the Council on American-Islamic Relations (CAIR) and funded by Michael Bloomberg's Everytown for Gun Safety,  George Soros' Center for American Progress and the Joyce Foundation, a group that funds gun control efforts.

While the Islamist groups want to render us defenseless against jihad in America, the political left wants to make us vulnerable to government tyranny. 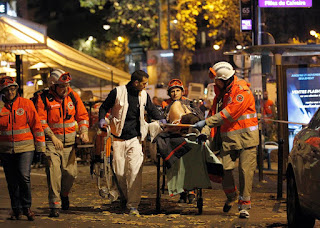 Sebastian and Katherine Gorka, experts on counterinsurgency and counterterrorism, noted, in a recent 20-month period, 74 adults and eight minors have been interdicted by law enforcement for connections to ISIS, including four killed on US soil. These numbers translate to a 300 percent increase in terrorist arrests in the United States compared to the average monthly arrests of al Qaeda suspects since the 9/11 attacks of 2001. FBI Director James Comey has already testified that there are up to 900 terror-related investigations going on in every state in the union.

Of all those intercepted, almost half (48 percent) were planning to leave the country and fight for Abu Bakr al-Baghdadi and ISIS in the Middle East. Another 19 percent were arrested for being facilitators, the talent-spotters who weren't going to fight themselves, but who identified potential jihadi recruits and eventually provided assistance for them to be "deployed" as terrorist operatives. The majority of the remaining ISIS suspects, a full 28 percent - or almost a third of all those arrested in the United States - weren't secondary facilitators or had any intention of leaving the United States to fight for ISIS in Iraq or Syria. These people had decided that the most effective way for them to serve Allah and ISIS leader Abu Bakr would be to kill Americans on US soil.

In a recent interview with Fox News' Megyn Kelly, Sebastian Gorka warned Americans that ISIS is already among us and that we should not be complacent and expect the government to protect us.

"Don't wait for Uncle Sam to protect you. Every American has a duty and responsibility to be aware of the threat and be prepared to protect themselves," Gorka told Kelly.

Even in the nation's capital, Washington DC, which is also the nation's gun-control capital, police chief Cathy Lanier advised citizens:

Ironically, Lanier has approved only 48 concealed carry licenses in the past year with a nearly 80 percent rejection rate. Of 233 applications sent for review since the Washington DC Metropolitan Police Department began accepting permits on Oct. 23, 2014, 185 licenses had been denied as of November 14, 2015.

I suppose what Chief Lanier means by taking out a gunman would involve appealing to the gunman's inner sensitive self, declaring a safe space or the employment of urinary incontinence.

"The fact, therefore, must be that the individuals, themselves, each, in his own personal and sovereign right, entered into a contract with each other to produce a government: and this is the only mode in which governments have a right to arise, and the only principle on which they have a right to exist."

That is, government is a construct of and accountable to its citizens and whenever the actions of government are contrary to their interests and well-being, citizens have the right to defy or dissolve the government.

The legal authority for a local militia and the right to bear arms is enshrined in the Second Amendment to the Constitution. Implicit in those rights is the responsibility to act when higher authorities abuse their power or fail to execute their lawful duties, in this case, national defense from all enemies, foreign or domestic.

The country has reached its Lexington and Concord moment.

Yes. We the People are reaching that critical point.
The tyrannical, fascist Left (i.e. the government and its toadies and camp followers) wants us to reach it. The People are the enemy. The islamofascists of all stripes are not. Any attempt to disarm the people will be met with defiance - and they know it. Pray for guidance and strength.

Remember always that fear is the totalitarian's best tool. An out-of-control government will marshal threats from any and every source, real, potential, and imagined, if by doing so it can suppress citizen unrest and disaffection.

The list can be extended to any length you can imagine.

No not yet. There isn't enough backswell against BOTH sides. To be believe the Republicans will fix it is just as insane a theory of man made climate change.

Trump is the catalyst, like him or hate him. Up or down he will hasten our countries direction.

All muzzies/3rd world immigrants have to go. Sorry.

The moment that Lawrence Sellin speaks of may happen, but only after administration-enabled terrorists successfully attack America (again), and the informed citizenry warmly greets the coming reprisals against Democrats and others who worked with Obama in fundamentally transforming the U.S.

I cannot repeat the following enough: Please read below if you are registered as an Independent voter and you want to vote for Cruz, Trump or Carson and you live in a CLOSED PRIMARY state: