The Last Refuge blog (also known as The Conservative Treehouse) has done yeoman's work exposing the GOP establishment's plot to jam Jeb Bush down the collective throats of the electorate.

Despite Bush's single-digit poll numbers, the GOPe remains fixated on a Bush candidacy (and, by extension, a Hillary presidency, since Bush has zero chance of winning a general election).

Most recently, Virginia's old guard has proffered a laughably obvious ploy to deter independent, Tea Party, Reagan Democrat, and Constitutional Conservatives who have abandoned the Republican establishment from voting in the GOP primary.

There is only one acceptable candidate for what people call the “establishment republicans” (abbreviated the “GOPe”), and that candidate remains Jeb Bush.

Regardless of how low his polling goes, Jeb will remain their guy. All other candidates, except Trump, are factored into the equation of control contained within the original construct of the GOPe road map. 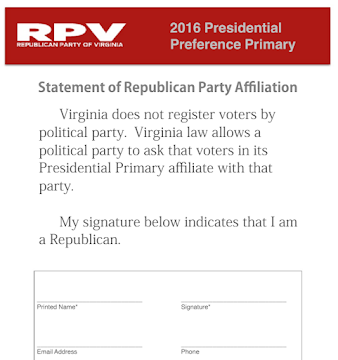 Tens of millions in advanced promotional GOPe ad-buys await the new year, the latest count was somewhere North of $70 million.

The splitter Super-PACs, currently focusing on the elimination of Donald Trump, have ad buys extended through Christmas,. and a half million dollar ad buy extension through the first two weeks of January.

With the rise of candidate Donald Trump the GOPe initially moderated their plan and famously required Trump to sign a GOP Pledge. However, they had a bigger problem.

What they never anticipated back in 2014 was an influx of non-traditional GOP voters to mess up the entire construct of their low support road map for Jeb.

Dropping Conservatives was considered good strategy, eliminating Republican registration – even better. Heck, solid evidence exists the GOPe were actively trying to drop Republican voter registrations and make control of the party nominee an even easier undertaking. This was reflected in their July/August/September confidence.

However, with millions of Independents and even conservative Democrats now supporting a center-right candidacy of Trump, a large segment of the electorate are registering or re-registering back as “Republicans” to support Trump’s primary race.

This massive coalition was never anticipated back in 2014 when the nomination road map for Jeb Bush was constructed. As a consequence several states’ Republican Party Committees began changing their own rules to try and diffuse the Trump risk. Ultimately the goal is to find ways to assist Jeb Bush. North Carolina and Colorado are two previously outlined examples.

The latest approach comes from Virginia – home of GOPe HQ, where they have now developed a “Statement of Intent” which all Republican voters will be forced to sign prior to voting in the primary.

Virginia does not require “voter registration by party”, however in an effort to dissuade the non-traditional republican voter they are forcing all voters to swear allegiance ... From a Virginia RPV insider/source:

[…] the goal is to effectively reduce the number of conservatives, independents, and yes democrats who will vote for a non-GOPe candidate (ie. Trump). Party faithful will gladly pledge their allegiance but the rest will stay home. Specifically the RPV is willing to piss off people who will vote republican just to ensure a GOPe candidate. RVP – HQ is a wretched hive of scum and villainy (see Cuccinelli ’13).

By now we hope all would be able to spot the transparent agenda.

As they say on the legitimate blogs, read the whole thing.

TLR and I have a difference of opinion as to the viability of Ted Cruz. We agree that Trump has obliterated the GOPe's "splitter" gameplan. But, unlike TLR, I believe that Cruz has no resemblance to Newt Gingrich, a scandal-ridden warhorse with questionable bonafides, and who had appeared just before the 2012 primary doing commercials with, eh, Nancy Pelosi.

Unlike TLR, I believe Cruz would smash any Democrat in the general election. After all, we've tried the GOPe candidates over and over again to ill effect. What say we try a consistent conservative in the mold of Reagan?

And who would you rather see on the debate stage facing off with Granny Catlady more than Ted Cruz?

I view Trump as the fullback and Cruz as the halfback; it's fourth down and goal to go on the one yard line for America.

I have yet to meet anyone in here in southeast Virginia that supports Jeb Bush.
Most of my friends and coworkers are solidly behind Trump.

Trump is my choice but I would have no problem supporting Cruz if Trump loses fair and square.

Sounds like the VaGOP has already forgotten the Cantor fiasco. These people are in for a rude awakening. Idiots, just like the national ones!

I cannot sign; I am a conservative Virginian, not a republican. Suck my donkey ballz, GOPe.

Another point to be made that cannot be stressed enough: (Listen up DrSandman above if the words below pertain you!)

Je suis Republican! If I must be a Republican to vote for Mr. Trump, then I am a Republican up to that moment! After that, who knows where my heart will lead me.