Giving Thanks for the Republican Establishment

Today I give thanks for my family, my friends, my colleagues and our great country, especially those who serve in our military, intelligence, law enforcement and first responder communities to protect us. I give thanks that I was fortunate enough to be born in this wonderful nation, the most magnificent society on the face of the Earth.

Did you drop your Republican registration to express your disgust? Awesome -- you did exactly what the establishment wanted, so you couldn't vote for an insurgent candidate like Donald Trump in your state primary.

Are you a 'Cruz Birther'? Super, you're burning calories on an issue that no legal expert -- on the left or the right -- believes has any validity. 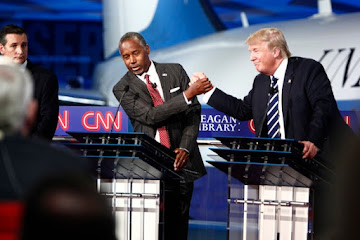 Do you think a President Rubio would lift a finger to seal the border? Pretty cool; but may I suggest that you lay off the psychedelic mushrooms?

Do you believe a President Fiorina, Christie, Kasich or Paul would be any different than Jeb! when it comes to illegal immigration or reducing the size of government? Excellent: I have some land in Whitewater, Arkansas I'd like to sell you --- it's a once-in-a-lifetime opportunity!

My friends, there are only three candidates left in the race who operate outside of the GOP establishment: they are Ben Carson, Ted Cruz, and Donald Trump.

It's important to understand one, simple fact: should one of these three outsiders become President, they will also become the de facto head of the Republican Party.

That's right: in one fell swoop, an anti-establishment candidate could take over and control the GOP leadership structure, by dint of the bully pulpit and a massive fundraising capability.

As the leader of the party, an outsider President could eviscerate the leadership structure and reorganize the entire, defective mess that is the GOP establishment.

That is what they fear most -- losing their cushy jobs and consultancies and actually having to work for a living. Oh, the humanity!

That's why I'm staying a registered Republican and supporting Cruz, Trump or Carson -- who ever I deem most likely to win at the time.

It's not just to save the Republic from the fiscal and national security timebombs that Obama has bequeathed to us. It's also to shred the entire GOP establishment and lay the foundation for a new Republican Party. A conservative Republican Party that can restore the rule of law, honor the Constitution, and begin flaying the lard off the federal leviathan.

I give thanks to the Republican establishment for declaring war on us. It makes our mission all the more clear; they must be removed from the halls of power.

Make sure your Republican registration is up-to-date, so you can support an insurgent candidate. It's the only way to stop these corrupt and feckless boobs who today falsely claim the mantle of "Republicans".

All the best to you and yours on this wonderful holiday. Thank you for patronizing my humble journal and may this season be a blessed one for all of us.

Can't fault your logic. And, you are exactly right. If you vote for an establishment candidate you will get more establishment policies.

After Walker dropped out, I've pretty much been on the Trump bandwagon. Border wall and deportations was all it took. I'm a pretty cheap date, too bad the establishment can't come to that realization.

Precisely. The local GOPe keeps pestering me for donations. I will never give until the RINOs are cleaned out and "e" can be safely removed. Until the time when I can vote for my candidate of choice (please, Dear God, let it be Ted Cruz), I'll just keep stringin' those old, dying RINOs along.

I don't trust Cruz, but I'd grudgingly vote for him over any establishment candidate IF Cruz seemed most likely to win the nomination. I much prefer Trump. I hope Cruz supporters will similarly plan on voting for Trump if he seems most likely to prevail in slaying the GOPe dragon.

Cruz voted the 1st time for TPP.. just another Rubio ..Cruz has backing of Millionaire and Billionaire donors.. Cruz selling out to Big Rino Money

Washington ,Wall Street Establishment worried that Trump can not be bought
...soon to be President Trump in 348 days... has my vote

Cruz was/IS for Syrian INVASION OF America IN 2013.. Cruz early backer of amnesty before flipping
He is smart, but has been bought out with Rino money .. Beware!!!!!!

I too would vote for Cruz, grudgingly. I'm glad to see Carson fading, no way is he presidential material, a great man with a great life story but no way, there's something a bit off there.

I don't think at this point Trump is stoppable. He's steadily gaining in the polls. I see that the big guns on the GOPe side are holding their fire with the exception of these laughable ads featuring Kasich. Time will tell but there's no doubt he has them befuddled.

And Doug, your site is still my first go to every morning as it has been for years-thank you for all you do.
MM

Ted Cruz is a fine, honest and decent man. He supported TPA, not TPP. He has won more cases in front of the Supreme Court than any other human being. He is a Constitutional expert which is something we need right now. He has always done what he said he would do since he became involved with politics. All one has to do is take a few minutes to look at his record. He is one of the few who stood against Obamacare and the corporate welfare IM-XM bank instead of going along to get along with the republican leaders. He even called Mitch McConnell a liar on the Senate floor.
Since Ted Cruz is rising in the polls, there are those who are misinformed or uninformed who will shoot flak in his direction. But the flak always appears when you are on target.

ted cruz is a LAWYER! TRAINED in law school,debate class & spokesman club to persuade and prey
upon peoples weak emotions! He is an opportunist in the extreme, and uses emotional wording
that is calculated to prey upon emotion! He sounds like an evangelical preacher! Do not be fooled by this LAWYER! WE NEED AN EXECUTIVE BUSINESSMAN that is and only is Mr. DONALD J.TRUMP!

I think a STRONG point was being made here that is:

Folks going with Teddy Cruz need to stop drinking the Kool-Aid ...Cruz hooking up with Glenn Beck and his Big money donor friend of Beck is enough alarm ..Cruz another walking Rubio
That is all you need

TPA was part of the TPP .. why did Ted Cruz vote with Boehner and Lying Obama ??