As part of an event on diversity and inclusion in the labor movement, professors at Cornell University displayed cartoons depicting Republicans as knife-wielding terrorists, raving lunatics, and even molesters.

The drawings were displayed at a social justice roundtable on November 13 sponsored by the School of Industrial and Labor Relations (ILR) as a way of putting students in touch with labor and social justice representatives, according to Hypeline.

A summary of the event on the ILR website says most of the organizations that participated in this year’s event major national labor unions—including AFSCME, the Teamsters, SAG, and the SEIU—though a smattering of others, such as the Worker Justice Center of New York, also sent delegates. 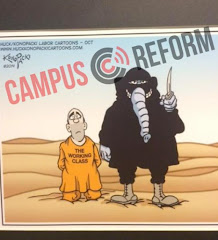 “I want students to walk away with an awareness of the many paths outside of the corporate world that they can pursue, and with connections to people who are finding success working for social justice,” explained student coordinator Allison Considine.

During the roundtable, representatives for the organizations circulated among groups of about 10 students, spending 20 minutes with each group “to answer questions participants may have on union and community organizing, strategic research and campaigns, public policy and advocacy, law and union administration.”

Perhaps in an effort to make the attendees feel comfortable, one of the partner organizations, Huck/Konopacki Cartoons, contributed several illustrations attributing the most unflattering characteristics to Republicans.

Photographs provided to Campus Reform by a student who wishes to remain anonymous show the drawings gracing a hallway, where they were displayed following the roundtable.

Additional photos show several of the cartoons individually, including three that make disparaging references to Republicans, one that features a swastika overlaying a Confederate battle flag, and another that depicts a tattered American flag with bullet holes in place of stars.

Hypeline reports that ILR Dean Kevin F. Hallock reached out to students with an email Thursday in response to concerns that had been expressed about the images.

“Art can sometimes shock and be controversial, and the dialogue created can be important,” Hallock wrote. “I hope the ILR school can flourish as a place where we discuss difficult issues and one where the members of our community feel safe and supported. I also hope that we can continue to prepare leaders who will help others increase inclusion, sensitivity and tolerance far beyond our school.”

And they said what happened in Nazi Germany couldn't happen here.

A political cartoon is funny when it highlights a political position as strange or extreme. These cartoons highlight just one message: Republicans are stupid and evil. It is hard to be funny about one, tiresom, repeated hate.