Just when you thought the gun-grabbing Left couldn't debase themselves further, the Democrat-aligned "Moms Demand Action" -- an astroturf-laden front group aligned with Michael Bloomberg -- fell chin-deep into the swamp today.

With a couple of ill-timed tweets (e.g., "This is how AK-47s get to Paris"), this mentally disturbed group appears to believe that Islamist terrorists, who destroyed the World Trade Center with airplanes and bombed London and Madrid, would obey gun control laws.

No word on what they want to do with suicide belts. 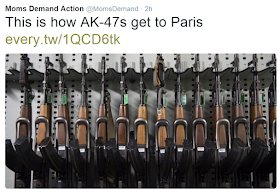 • Any reasonably equipped machine shop in the civilized world can be used to manufacture a firearm.

• Nothing short of a time machine can uninvent the firearm.

Unless "Moms Demand Action" and Bloomberg, who ironically is protected at all times by armed bodyguards, can ban machine tools and invent a time machine, firearms will be required to stop the evil scum who seek to terrorize civilians.

In fact, any sane person would admit that a few concealed carriers could have helped end the Bataclan massacre. Instead, a couple of terrorists were able to execute dozens of helpless victims for about 10 minutes. Can you imagine the victims' desperation? Their final thoughts perhaps "If only I had a gun."

Hey, @MomsDemand, Can you guess which policy could have helped prevent the Paris theater massacre? #concealedcarry #ParisAttacks

These gun-control fools are the lowest of the low.


When the next hit comes—and I assure you, it is a matter of when and where and how, not if—it will be the American civilian who will be there first, not your local police patrol units or sheriff’s deputies, and certainly not the SWAT units who will mop up the enemy so that fire and EMS can begin extracting the wounded and counting the dead.

The Second Amendment exists for a reason, not the least of which is to permit any American citizen to defend their own life and the lives of their family.

These useless sheep should change their group's name to "Moms Demand Unarmed Victims".

It is a good thing that none of the 140 people in the theater were armed. They might have shot at a terrorist, missed, and accidentally killed an innocent. Leave the guns to the professionals.

"It is a good thing that none of the 140 people in the theater were armed. They might have shot at a terrorist, missed, and accidentally killed an innocent. Leave the guns to the professionals. /sarc off"

Andrew Garland, I'm sure the families of the 140 dead people are grateful no one had the chance to save their loved one because someone MIGHT have been injured.

Andrew Gayass... You are a fucking idiot.. Go drown yourself.. You brain-dead, Obama ass-licking piece of retarded shit!

Andrew Gayass... You are a fucking idiot.. Go drown yourself.. You brain-dead, Obama ass-licking piece of retarded shit!