The famed French satirical magazine Charlie Hebdo has published its take on the Paris terror attacks.

It would appear that this particular magazine cover is a clever plea for a French version of the Second Amendment.

It reads, "They have weapons. F--- them. We have champagne!"

It's pretty telling that the most liberal periodical on the planet is to the right of our beloved president. 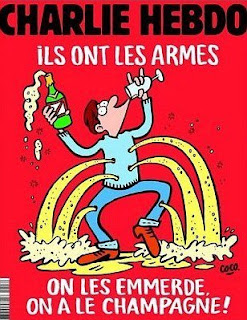 Charlie Hebdo has frequently provoked outrage among Muslims by publishing cartoons of the Prophet Mohammed, whose image is considered blasphemous by many followers of Islam. Its "survivors’ issue", the first to be published after January’s attack, featured a cartoon of the Prophet Mohammed on the front page.

"Blood and tears, prophesised Churchill. That's where we are. Without realising it, the Parisians of 2015 have sort of become the Londoners of 1940, determined not to yield, neither to fear nor to resignation, whatever catches them off guard," he writes.

He calls for renewed debate on Islam, which, he writes, "for the past 20 years has become a battleground where radicals want to exterminate non-believers and subdue moderates by force."

"Avoiding the pitfall of division should not make us renounce the right to criticise religion on the pretext that its exercise is sometimes irritating. Among all the basic freedoms that make up our lives, it is also this freedom that the killers wanted to eliminate this Friday evening," Riss added.

It's pretty sad that an ultra-leftist magazine is more conservative then Barack Obama.