What do you get when a Cuomo, a Clinton and the Brady Campaign get together to toast each other?

A lot of hollow rhetoric blaming America’s law abiding gun owners for the acts of criminals and madmen, and oh yes, an award for Hillary Clinton.

The primary message of the event was clear: everyone wants more gun laws, and the only thing stopping their passage are cowardly politicians acting in concert with the NRA.

Heaping praise on Clinton for her “courage” in attacking the fundamental rights of Americans, Cuomo said “The gun issue is the best proxy of our time to judge the essence of an elected official,” adding, “and Hillary Clinton has shown again and again—and I‘ve worked with her for over 20 years—all her life, whether it be the radical right, or the forces against a woman’s right to choose, or big oil and gas, or the NRA, or the gun companies, Hillary Clinton will stand strong by her word her convictions and her principles.” 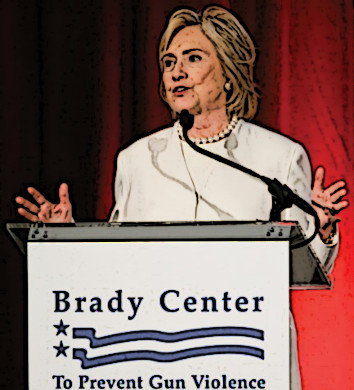 Cuomo is wrong on the basic issue, but he is right that “The gun issue is the best proxy of our time to judge the essence of an elected official.” And Hillary Clinton fails that test in spades. Pandering to fear in an effort to win restrictions on the freedoms protected by the Constitution is not a sign of character, but a clear indication of blind adherence to a gun control ideology.

After repeating a number of misrepresentations (for instance, Clinton called "gun violence" a “national emergency” when in reality violent crime is at a near all–time low) Clinton added pandering to her repertoire by using the recent terror attacks in Paris as an excuse to further restrict the rights of law-abiding Americans. Like so many other anti-gun activists, Clinton seems capable of adapting almost any tragedy as a reason to pass more gun laws, even tragedies that involve explosives and illegal arms in France.

In lauding Clinton, the younger Cuomo quoted his father, saying he believed that “the test of an elected official is determined by the question of their character.”

If this is so, Hillary Clinton largely comes up short. Polls have repeatedly shown that when asked for a word that describes Mrs. Clinton, the most common response has been “dishonest.” Clearly, the American people understand the nature of Hillary Clinton’s “character” and have found it wanting. It should also be noted that the Brady Campaign did not ignore the other New York icon of anti-gun extremism, specifically honoring Sen. Charles Schumer for his decades of work diligently pounding away at Second Amendment freedoms.

All in all, it was quite a night of anti-gun self-aggrandizement, but one that gun owners should not forget as the 2016 election heats up.
Read more at Institute for Legislative Action.

( http://www dot arnoldkling dot com/blog/if-i-gave-a-high-school-graduation-speech/ )
Economist Arnold Kling writes that many people simplify their considerations of public policy by judging the intentions of the people involved. Most anti-gun sentiment uses this shortcut to observe that guns are designed to kill people, killing is a bad intent, and so guns should be banned. The gun itself is evil and of bad intent.

--
This mental shortcut ignores death from many activities in life which are more obviously good or productive.

People see automobiles and swimming as useful, fun, and positive. Automobile death and injury, and drownings, are accepted as a regrettable risk of living a full life.

A 1993 survey estimated 2 million self-defense uses of guns per year. The gun was fired in 24% of those cases. Just showing a gun put off many threats.

The public should see gun possession and defensive use as useful and positive in providing a safer and less fearful life. Defensive gun ownership has no bad intent and is quite safe compared to accidental death from recreation.

( https://reason dot com/blog/2015/03/09/how-to-count-the-defensive-use-of-guns )
=== ===
[edited] A survey in 1993 by Florida State University criminologists Kleck and Gertz estimated that over 2 million defensive uses of guns occurred in the US that year. A defensive use is referring to, brandishing, or firing the gun. This would involve about 1% of all guns each year. The gun was not fired in 76% of defensive uses.
=== ===

The above link also considers the difficulties of knowing precisely how many defensive uses occur.