"One of the most cynical, cold-blooded, and nastily divisive moves an American President has made"

Read the entire piece and pass it on. It's that important.

Don't take my word for it, check out the highlights yourself:

...To see the full cynicism of the Obama approach to the refugee issue, one has only to ask President Obama’s least favorite question: Why is there a Syrian refugee crisis in the first place?

Obama’s own policy decisions—allowing Assad to convert peaceful demonstrations into an increasingly ugly civil war, refusing to declare safe havens and no fly zones—were instrumental in creating the Syrian refugee crisis. This crisis is in large part the direct consequence of President Obama’s decision to stand aside and watch Syria burn. For him to try and use a derisory and symbolic program to allow 10,000 refugees into the United States in order to posture as more caring than those evil Jacksonian rednecks out in the benighted sticks is one of the most cynical, cold-blooded, and nastily divisive moves an American President has made in a long time. 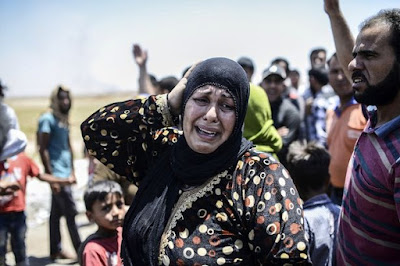 Moreover, many of those “benighted” people were willing to sign up for the U.S. military and go to fight ISIS in Syria to protect the refugees. Many Americans who now oppose the President’s ill-considered refugee program have long supported the use of American power to create “safe zones” in Syria so the refugees could be sheltered and fed in their own country. If President Obama seriously cared about the fate of Syria’s millions of displaced people, he would have started to organize those safe havens years ago...

...Not even President Bush’s decision to go to war in Iraq has been as destructive for Europe or as damaging to the Transatlantic alliance as President Obama’s hard-hearted and short-sighted Syria policy. The flood of refugees is shaking the European Union to its core, and Obama’s policy has cemented perceptions among many around the world that the United States is no longer the kind of useful ally that it once was. France didn’t even bother to invoke NATO’s Article 5 after the Paris attacks; nobody really thinks of President Obama as the man you want at your side when the chips are down.

...The collapse of President Obama’s Syria policy is hardly a partisan issue. He has repeatedly overruled his own national security officials, top diplomats, and advisors, many of whom have been horrified by the President’s passivity in the face of onrushing disaster. His abrupt policy switch on airstrikes left many senior Democrats who had supported his apparent determination to enforce his “red line” against Assad twisting in the wind.

To think that conspicuous moral posturing and holy posing over a symbolic refugee quota could turn President Obama from the goat to the hero of the Syrian crisis is absurd. Wringing your hands while Syria turns into a hell on earth, and then taking a token number of refugees, can be called many things, but decent and wise are not among them...

...For no one, other than the Butcher Assad and the unspeakable al-Baghdadi, is as responsible for the humanitarian catastrophe in Syria as is President Obama. No one has committed more sins of omission, no one has so ruthlessly sacrificed the well-being of Syria’s people for his own ends, as the man in the White House. In all the world, only President Obama had the ability to do anything significant to prevent this catastrophe; in all the world no one turned his back so coldly and resolutely on the suffering Syrians as the man who sits in the White House today—a man who is now lecturing his fellow citizens on what he insists is their moral inferiority before his own high self-esteem...

...Things can and will get worse as long as American policy continues to flounder; instead of arguing about how to shelter a few thousand refugees we need to look hard at how we are failing to address the disaster that has created millions, and that continues to grow.

I repeat: read the whole thing, every word, and forward it on to everyone on your list, Democrats especially.

If such a party really does exist outside of ISIS, La Raza, CPUSA, and the SEIU.

I hope the Republicans in Congress go ahead and pass the bill to place a pause on the USA admitting Muslim refugees from the Middle East. I also hope they include a section that permits the admittance of Christians from the Middle East since their lives are at risk every day.

The author arrives at an erroneous conclusion based on a false premise. Obama made no secret of his desire to crush Assad. He did everything he could to destablisize the region. He armed and created ISIS by withdrawing from Iraq. His Banghazi operation was aimed at funneling arms to radical groups.

It wasn't because Obama failed to act, his actions worked exactly as he intended.

I'm afraid I tend to agree with Anonymous. Mr. Obama DID create ISIS. However, I believe that there needs to be a sound philosophical basis by which a leader in this situation can make the right choices. Whether Mr. Obama's "blunders" are intentional or otherwise, they lack wisdom. I've done some thinking on this and if you don't mind, I'd like to interject what I've written which I believe suggests what would be the wise choice. I think that Doug's essay is pretty much corroborated by what I've said here..
. http://bennysopinions.blogspot.com/2015/11/four-remedies-to-immigration-problem.html

To Anonymous at 10:32 - you are 110% correct. Things are going exactly how Obama and his handlers have planned.

Below is an explanation written by a poster at "The Right Scoop" (www.rightscoop.com) with whom I totally agree.

"I think it's all part of Obama's new world order strategy. He knows the entire world is on the verge of total economic collapse. The world has more than $250T of debt hanging over it like the Sword of Damocles much of it will never be collected but they're allowing more to be created every day by keeping interest rates at 0%. His plans are for Russia to take control of Europe, the progressive democrats to take over the America's, China to take over Asia, and Iran to control the Middle East which is why he's allowing them to develop nukes after the economic collapse happens. The new world order will be presented to the worlds population as a choice between peace and a nuclear holocaust. Which would they choose?"

This has all been in orchestration for some time. Obama never intended to honor is Oath of Office, nor does he have any allegiance or love for America - traditional America.