Clinton also said she turned over all of her relevant work emails from her time in Foggy Bottom, but the Benghazi Committee proved that false when Sid Blumenthal provided them 15 emails not included in the ones Clinton turned over. More emails between Clinton and Gen. David Petraeus were found later. When confronted about how she chose which emails to hand over to the State Department and which to wipe off her server, Clinton pointed to her team of lawyers. 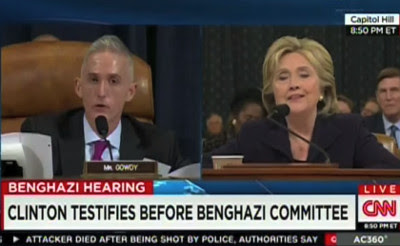 The story of why Clinton was forced to turn her emails over to the State Department has also been refuted. She said she did so voluntarily, along with other former secretaries of state, to help “fill gaps” in the department’s records. In September, State Department press secretary John Kirby told the Washington Post that the department was made aware of Clinton’s private server by the Benghazi Committee, which requested she turn over all of her documents. They reached out to Clinton three months prior to contacting any other secretary of state.

And it goes without saying that Hillary Clinton's lies about the Benghazi attack being motivated by a video were beyond the pale; lying to the American people, lying to the families of the dead, and lying to everyone within earshot.

So, will she be placed "in contempt" of Congress for committing perjury under oath and treated according to our laws? Well? Hello? Hellllooooooooooooo??????????? Anyone?????