It's been almost six months, and the Waco indictments are just rolling in. So much for swift justice. Or the freedom to assemble.

But do American's really care about the 1st and 6th Amendments, when those fought-and-died-for rights pertain to bikers?

On May 17, 2015, numerous motorcycle groups met in Waco, Texas for a Confederation of Club's joint meeting. Scheduled at a Twin Peaks restaurant, they set out to discuss laws, mutual rules, and common ground. It would be hard to anticipate that lunch with fellow bikers (which included a mix of 1 percenter outlaw, U.S. Veteran and Christian groups) would turn into bloody mayhem.

Here's a little background: Alarmed by the anticipated number of riders headed for town, local authorities beefed up their presence. And ammunition. 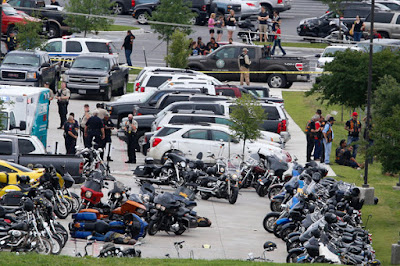 As a parking lot scuffle between two men, from rival clubs, escalated into a shooting -- some witnesses believe officers panicked, firing into the crowd.

And all hell broke loose.

Caught by surprise, hundreds dove for cover until the shooting ended. When it was over, 9 were dead and at least 18 seriously injured.

Law enforcement rounded up 260 people, ultimately arresting 177. Many, who were taken into custody, claimed to be innocent bystanders, including a former marine who didn't arrive at Twin Peaks on a bike, but was swept up in the mass arrest and held for two weeks on a million dollar bond.

This is how it played out:

Citizens proclaim they were indiscriminately taken into custody, for being in the wrong place at the wrong time. And because all cell phones were confiscated, it's unlikely that independent, hand-held, video evidence exists.

After the arrests, virtually all Information was filtered to the media through theatrical press conferences, hosted by local police Sgt. Patrick Swanton. And it soon became clear: his was the only show in town.

Facts were hard to nail down, because opposing voices were either dead, hospitalized, in jail, or silenced. Case in point: After a defense attorney called his own press conference, where he passionately criticized law enforcement's actions, he was slapped with a gag order.

In a slam dunk effort, the official position soon became the only position. And here, in a nutshell, is what authorities claimed: Those arrested were all organized crime members, and law enforcement prevented what could have been a far worse outcome. In other words: authorities didn't escalate the chaos, but rather--they asserted--by their heroic efforts, violence was curtailed.

And then there was this: Shortly after the shootout, exaggerated statements -- regarding 1,000 confiscated weapons -- were delivered to the nation, via the press. Those reports were soon downgraded, both in number and intensity, to just over three hundred. And, as it turned out, some of those weapons were actually common pocket knives, as well as guns -- legally possessed.

But instead of investigative reporters, uh...investigating, they spoon-fed the official word right back to the public. Every. Last. Bite. Consequently, citizens digested what they were given, leaving little room for the deeply-rooted American sentiment of outrage over injustice.

And what about the dead?

Nine men, between the ages of 27 and 65 were gone. Lost lives that were broadcast over the airwaves in a stoic, roll-call of implied, "They're not like us; they deserved it," statistics. Although de-humanized before the country, in actuality, these men were someone's brother. Someone's spouse. Someone's dad. Someone's son.

Among the dead: A Purple Heart awarded Veteran, and a man who sported a tattoo with the Bible verse: "I can do all things through Christ, who strengthens me."

Once the dust, and the grandstanding, settled, authorities appeared frozen. Unable to go back for a do-over, they seemed uncertain of exactly how to move forward. The bottom line was: Nine people were dead, several were seriously injured, and lots of folks, many undoubtedly innocent, were still sitting in jail. Ballistic reports, revealing who shot whom, had not been released, and wrongful arrest suits were bound to be filed.

At this point, law enforcement ditched the press conferences and developed a strategic posture of stonewalling. And it wasn't just your run-of-the-mill stonewalling either. Nope. This was a concerted effort, a dig-your-heels-into-the-ground version of stonewalling that left little vulnerability for independent scrutiny.

And the oddities kept coming: A Grand Jury foreman was appointed who just so happened to be a Waco police detective.

Then, on November 10, 2015 (nearly 6 months after the massacre) a McLellan County Grand Jury handed down indictments for 106 bikers, while the other 71 continued to wait. Each of the indictments were worded the same, and magically mimicked arrest reports. Exactly. All came down as felonies, committed by members of organized crime.

Defense attorneys referred to the Grand Jury's deliberations as nothing more than "Cookie cutter justice," determined within a superficial time-frame of approximately 5 minutes per individual.
After such an onslaught of questionable legal behavior, there's reasonable alarm over the sort of trial these men might await.

The illusive deeds in Waco should barrage every fair and intelligent American, from all walks of life, with a multitude of questions.

And where, in God's name, is the truth?

Friendly tip: Please learn how to use an apostrophe.

I saw huge problems with that at the time, right out of the box. I have some friends that are or were cops. A few of them tried to blunt the thing. I just gave them a list of "corrections" and current and past actions, and asked if that's simply how they roll or not. I just reminded them, especially the formers, that when it's their turn, don't look to me for sympathy. Once someone isn't a cop, as they say, they are just little people. Especially if they roll that way.

What are you, a federal stooge? Seriously, an apostrophe? You don't deserve comment, you do deserve to be called out. Nine people get dead by cops, and the whole thing gets covered up, and you are worried about such a stupid thing? No wonder people despise their government, and it's actors.

This stunk from the get go-I've been thunderstruck at the ass fucking these men are getting and I'm equally amazed at the total lack of any kind of investigative journalism. I guess that part of the left dominated media can be officially called toes up.

All I can say is expect the exact same thing if you run up against these forces. You'll be dropped into a deep dark hole and that'll be that.

We've turned into an unrecognizable country and no one seems to care.
MM

This is the kind of incident that cries out for a thorough investigation by the media and the DOJ. Unfortunately both are involved in prosecuting white policemen and protecting Trayvon and Brown. Besides they have to promote Black Lives Matter and Climate Change.

I have been following this BS story from the beginning. I don't know of any bikers stupid enough to start a gun battle with police armed with M16s. There are other covered up police over reaction stories.

Travon Martin and Michael Brown were both thugs killed in self-defense and look at all the press they received.

Stories of the police killings of Miriam Carey, Ricky ‘Maya’ Shawatza Hall, and Milton Hall (and more) were never picked up long term by the MSM. Police in the first two refuse to release any video evidence. Miriam Carey was shot 5 times in the back through her rear windshield in DC trying to get away from police, who were shooting at her. Ricky ‘Maya’ Shawatza Hall and friend were in a stolen vehicle with cocaine when they made a wrong turn from hell, into an off ramp leading to an NSA entrance. What would you do? They tried to leave (apparently, from the photos) a cop car blocked their path and was hit by their vehicle and both were shot, one dead.The driver lost control AFTER being shot. Milton Hall was a mentally ill guy with a pen knife executed by police. See Youtube. All these people were black BTW but the MSM has such group think that the stories die, after misleading headlines, smears and conclusions. Compare to Travon Martin or Michael Brown. This is not liberal bias or racial bias.

I only mention this as an example of group think and of the lack of analytical ability to ask what happened first, second, third, etc.

@RobG: You obviously lack in comprehending this serious case of injustice ergo using worthy space commenting on Doug's well written post about 'learning about apostrophe? Are you serious? $uck off!

@eclecticme: Over the past 5 years we have seen a number of cases where the truth is surpressed in criminal matters involving 'law enforcement. It can also get you assassinated if a reporter chases the truth: Michael Hastings - a NYT reporter following leads involving Bergdahl (his highly questionable desertion and doing a switcheroo to the Taliban) and the Commanding Officer that was 'fired' under questionable circumstances - McCyrstal (sp). His 'car accident' was not caused by him; the reporter wanting to investigate his death was 'threatened'. Fear caused 'silence' and no other data is available.

Waco is a place now with two major injustice scandals - the first one being the burning down of the compound of Koresh.
The Waco biker scandal deserves justice - not the one dispensed but true justice. Thanks Doug for keeping this misjustice alive.
Sundance at his/her 'treehouse' site did great investigative work despite not being one of the major news reporters. One can back and look at the many pics and investigative work concluding that it was the cops killing all 9 victims simply based on shells found on the ground and positions of cops including their snipers.
To this day - the camera videos of the surrounding business - such as Twin Peaks Restaurant - have not been released and with good reason.
This videos would surely prove these bikers innocence. They are innocent!

I am not sure how police officers and snipers - in this case only - can be so corrupt as to cover their asses - rather than taking responsibility for their killing of 9 innocent americans and wounding many others. These law enforcement officers - present on the day in Waco - are the guilty party - not the bikers!

"...because all cell phones were confiscated, it's unlikely that independent, hand-held, video evidence exists..."

Incorrect. It indicates that a great deal of independent, hand-held video evidence exists, and that the police do NOT want to release it, most likely because it clashes with the official accounts.


The tipping point will be reached when the majority of police officers realize that one (or possibly two) of their own rifle-armed officers deliberatly fired down into the crowd at the first sign of a struggle and continued to fire until they ran out of convenient targets.

And the unseen hand works on the PP sshooting as well. The dude is guilty, but I question the corroborating "evidence" from his online activities, as well as the non-disclosure of facts. Dropped into a hole is right. Only a year left to go.