As Parisians were being slaughtered by radical Islamists, of whom at least one and perhaps two were migrants, Barack Obama was opening new processing centers which will double the number available to refugees in the Middle East in an effort to speed up and increase the numbers to be admitted.

Most Syrians are screened at U.S. resettlement at centers in Istanbul and Amman, Jordan.

The Obama administration is moving to increase and accelerate the number of Syrian refugees who might be admitted into the United States by opening new screening outposts in Iraq and Lebanon, administration officials told Reuters on Friday.

“We want to be in a place where we can push out really ambitious goals,” said one of the officials, who spoke to Reuters on the condition of anonymity.

Lebanon had been closed because it’s too dangerous. What’s changed? If anything it’s more dangerous. 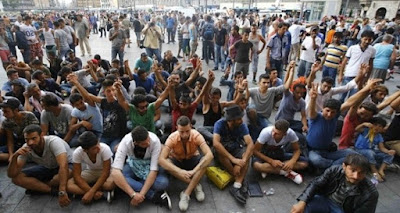 Barack Obama wants to move them in before Americans start demanding the massive flow be halted.

We no longer know how many refugees he is going to take in. There is a veil of silence but we know that it was originally 10,000 additional Syrians, 200,000 refugees each year for two years, and we know the Democrats want far more.

It was a Syrian migrant according to the latest news reports who was found among the dead suicide bombers in Paris Friday night, having entered Serbia on October 2nd where he was vetted and vetted again Greece on October 3rd.

The media will tell us the US is taking too few but we take in more than all the other countries combined.

The U.S. State Department confirmed the plans to open a refugee settlement processing center in Erbil, Iraq, before the end of 2015, and to resume refugee processing in Lebanon in early 2016, said spokeswoman Danna Van Brandt.

Both are hotbeds of terrorist activities.

We already have nine screening centers worldwide and DHS employees – clerks – will decide who can come in and be resettled. The intelligence agencies have told us we cannot vet these people so we’ve decided to turn it over to bureaucrats.

Some Republicans are concerned about national security.

“We have little or no information about who these people are … no ability to determine whether they are radicalized,” Republican Senator Jeff Sessions said at a hearing on Oct. 2.

When are Americans going to start paying attention?

I contacted our governor today to ask him to follow the Michigan governor's example today by telling Obama we refuse to take in any Syrian Muslim refugees but would accept Christians who risk being beheaded, raped, or enslaved every day they remain in the Middle East. The Muslim families should remain in Middle East in Saudi Arabia's air-conditioned tent city or in one of the other oil rich countries.

I hope Americans across the country do this. Tomorrow, I plan to e-mail my Representative and Senators asking them to block the entry of all Muslim refugees into America.

Why should a little Dance Hall violence come between fellow travelers? He's just introducing them to the perks of our culture. Sit back, be quiet, we'll be landing soon.

Turn the processing centers into temporary housing until every refugee can be fully vetted, if that's even possible.
If there is a benefit of the doubt between our sympathy and national security, national security should receive it.

Mike ? you are too kind.
We don't need any islamic syrians here and exactly HOW would they vet them anyway ?
let them send them to bermuda or something. LOL
but on a serious note, WHY IS THIS OUR RESPONSIBILITY ?

correct, there is no way to vet the hoards that are coming in, I mean really now, come on, do ya think they have all their "papers" to prove who they are? this is a planned invasion to bring the usa down...

There is absolutely no reason to take refugees at all! This is as stupid as stupid gets! Every country can put the money into protecting them near where they live! Are you telling me the U.S., aurope, nato, and the UN can't protect them in a refugee camp in the middle of nowhere in their own country! All the money spent bringing them to other countries, and taking care of them, would be plenty enough to relocate them at home! The only reason to bring them here is to disrupt things here! Exact same thing is true with immigration from latin america, and mexico! F washington! F liberals! These people need to stay home and fix their own problems! We can give them that money to help! But, then, this has nothing whatsoever to do with refugees or legal/illegal immigration! It has to do with the NWO plan to equalize economies, and cultures! F the NWO!

Very Simple solution. Publicize this to world wide... "Any muslim that engages in murder, will have their remains submerged in a container of Pig Blood" additionally, "every related family member to the 3rd cousin will be sought out and exterminated by our elite female special forces team, whom will also dip their ammunition in pig blood before it is loaded into the weapons magazine."

Anonymous love your position and I want to join your female special force team. I fear the time has passed to save our AMERICA but I well never give her up without a fight. WAKE UP CITIZENS AND BE PREPARED TO STAND AGAINST THIS EVIL WITHIN OUR GOVERNMENT

Robert; Several mnths ago,.after reading how B.O assigned Muslims prominent positions at D.H.S,, I had.a dream,.It started with me crouched in a row of shrubs, peering out in to an abandoned U.S middle-class neighborhood. Spooky quiet, no one.i am running for my life. I crawl into a house,.look out the back window,.to see approx. 6 heavily armed,uniformed mmiddle eastern young men scramble thru hunting people down,.i was terrified. B.O., is that "king of fierce countenance"_Dan.8:23-25. An ominous warning indeed.

Gideon said...
This comment has been removed by the author.
2:36 AM

Anonymous and Alaska Deb, I love your comments. Because they are ACTION orientated. I too will join the special force team, let's get busy. Find me at
blueglacier@protonmail.com Contact me for dialogue and sharing of Action Plans.

All folks engaged in fighting this B.S. keep your eye on https://refugeeresettlementwatch.wordpress.com/ One woman is running this site all by herself and she is doing a fantastic job. She's a Clearinghouse.

Get busy Americans / Canadians. We can do this!

So, in a debate, someone should ask Ms. Clinton something to this effect.
While you were Secretary of State, the White House decided to assist in deposing Qaddafi and, at the same time, supported Syrian opposition groups to make sure Assad didn't overwhelm and defeat those groups. In the first instance, Qaddafi was deposed and in the second, the status quo remains and the war is dragging on while Assad is still in power. What, Ms. Clinton, contingency plans did the White House have for refugees? What was the plan for dealing with refugees in Libya, a country without a functioning government and in Syria, where most of the country is unsafe? How did you, Mr. Rhodes, and Ms. Rice discuss the inevitable refugee issue?

good comments but be careful what you're posting as THE PLAN remains to destroy us and they are watching etc.
if you haven't connected yet, get moving.
you meet like minded LAW ABIDING folk right where you are and most likely are acquainted.

as for right here and now, contact your esteemed governors and reps and tell them in no way,shape or form are ANYMORE ISLAMICS ENTERING THE USA.
no more of ANYTHING and ANYONE entering the USA until a total INVENTORY GETS DONE and this "inventory: gets done under the existing LAW on entry.
and if they ask, well what ARE YOU GONNA DO ABOUT IT meaning that the usual game of them simply going along w/their preplanned deals--simply tell them they will find out-
IF THE MORONS THEN ASK ""is this a threat ?" no-it's a direct statement.

mygawd HOW WE OUTNUMBER THEM !
get out and bang on doors, get info from the internet "how they voted" "freedom report cards" "COSTS OF ILLEGAL IMMIGRATION" ,how much to resettle these bs artists called refugees -print them up, post them in the stores, the laundramat, bus stops -
it's very late and seems like this is IT/

George Soros financed Ferguson.
George Soros financed the European Invaders
George Soros probably financed Missouri.
George Soros owes REPARATIONS.
Those who ENABLED these INVADERS to flood in must pay reparations to the Families and Survivors. Start with George Soros' wealth, then Merkel, and go on down the line. The INVADER ENABLERS committed these acts BY PROXY and must pay FULL REPARATIONS. They must pay for the costs of policing and controlling THEIR AGENTS , feeding, housing, clothing, and REPATRIATING the invaders.
Jewish Billionaire George Soros has confirmed he wants to bring down Europe’s borders, following the accusation made last week by Hungarian Prime Minister Viktor Orban. “This invasion is driven, on the one hand, by people smugglers, and on the other by those (human rights) activists who support everything that weakens the nation-state,” Mr Orban said. Mr Soros has now issued an email statement to Bloomberg Business, claiming his foundations help “uphold European values”, while Mr Oban’s actions in strengthening the Hungarian border and stopping a huge migrant influx “undermine those values.” “His plan treats the protection of national borders as the objective and the refugees as an obstacle,” Mr Soros added. “Our plan treats the protection of refugees as the objective and national borders as the obstacle.” Already Israeli businessman are buying up land in northern Iraq, where ISIS(rael) has depopulated an entire region, overwhelming Europe with refugees in the process.
Soros, a WWII Nazi COLLABORATOR, has been spreading TEARS and CHAOS through his financing of "color" revolutions, and his financing of race riots in America starting with Ferguson. Soros owes REPARATIONS globally.

Move the INVADERS into the homes of those who say they WANT them, not into OUR neighborhoods, INTO THEIR HOMES. MAKE every Son of a BITCH who wants these INVADERS ------- PAY for them. TAKE the money from all who insist we welcome them. TAKE the money from the Bush, Merkel, Soros, Reid, Cheney, Pelosi, Rove, Graham, McCain, the POPE, etc. families who CAUSED this mess. TAKE their family wealth, they can live with the INVADERS they love so much.
Do not "ask" them to contribute ....... TAKE THEIR WEALTH because they are TAKING YOURS.

please pass this info around the best you can-


****While the United States is the largest donor of humanitarian assistance to Syrian refugees, we must also dramatically increase the number of Syrian refugees that we accept for resettlement,â€ the group of 14 lawmakers â€” led by Senate Minority Whip Dick Durbin (D-Ill.) and Sen. Amy Klobuchar (D-Minn.) â€” said Thursday.*********** snip

the diMs and the UN are at it full force-

contact the klowns the same as YOUR OWN REPS.

dick durbin is WELL KNOWN as dick turban etc and for good reason.