THE REAL 2016 ELECTION: The Bipartisan Political-Media Establishment vs. the American People

It is a decadent system the political-media elite created and continues to nurture, one that benefits a few at the expense of the many. 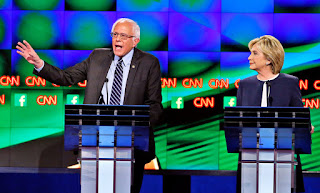 There are only two issues that matter for the 2016 election: the political-media establishment is hopelessly corrupt and, although we have elections, we no longer have representative government.

It is a system, not incapable of, but largely unwilling to solve pressing national issues like illegal immigration, a moribund economy or the threat from radical Islam.

It is because solutions benefitting the American people conflict with the financial or ideological interests of the oligarchy, the Democrat and Republican establishments, the media and their financiers, who every four years hire a President.

It is a system that, through benign, if not criminal neglect, made possible the two-term Presidency of Barack Hussein Obama, who, if he continues unopposed, will fundamentally transform the United States from a capitalist republic based on Judeo-Christian democratic principles into some kind of Islamo-Marxist totalitarian perversion, a permanently weakened and fragmented America.

It is now but a tiny step to Obama's "America" from that which the oligarchy has already shaped, a composite government of J. L. Talmon's "totalitarian democracy" and Sheldon S. Wolin's "managed democracy."

That is, a political system in which lawfully elected representatives rule a nation state whose citizens, although granted the right to vote, have little or no participation in the decision-making process of government; a country where citizens are politically uninterested and submissive - and where elites are eager to keep them that way.

Thomas Jefferson feared that it would only be a matter of time before the American system of government degenerated into a form of "elective despotism" (1785), now fostered by corrupt politicians, enabled by wealthy special interests and facilitated by a compliant press.

"They should look forward to a time, and that not a distant one, when a corruption in this, as in the country from which we derive our origin, will have seized the heads of government, and be spread by them through the body of the people; when they will purchase the voices of the people, and make them pay the price."

Is it not true that members of Congress seek election, not to uphold the Constitution and serve the American people, but to obtain power, and to use that power to accrue professional and financial benefits for themselves and their major supporters?

Is it not true that the current tenant in the White House leads a dishonest and lawless cabal of anti-American ideologues, who engage in activities and foster policies that risk the survival of the American republic, undermine the security of its citizens and abrogate their unalienable rights?

Is it not true that when the blatant and outrageous lies of the political-media establishment are no longer sufficient to soothe the electorate into complacency, such a government must begin to curtail liberty and oppress the people in order to remain in power?

Is it not true, as Thomas Jefferson predicted that corruption has seized the heads of our present-day government in a manner similar to that which sparked the American Revolution?

Ladies and gentlemen, we are now on our own.

NO. All NON-VIOLENT traditional mean have.
Our Declaration of Independence makes it abundantly clear that - TRADITIONALLY and LEGALLY - "...whenever any Form of Government becomes destructive of these ends, it is the Right of the People to alter or abolish it."

What we see is the result of the International Socialists who planned every little detail - including dissolving the white and Judeo Christian peoples and replacing them with the implosion of young, muslim men who will act upon and follow their requirements and sharia law - such as the bankers, the Rothchild's, CFR, Fabian Socialists and Frankfurt School among a host of others.

We all know that the Frankfurt School distributed and placed their members/agents into every institution in the US. The Corporate media is doing their part pushing this same agenda while manipulating their viewers/readers.

The International Socialists have succeeded in destroying, labeling and demoralizing the 'nationalists' in the west. Many of them no longer have the stamina and will to fight for their 'culture'.

The International Socialists know that Europe will implode in 2016 - like a zipper opening from one end to the other. These thousands if not a million of the current mislabeled refugees - all young and fighting age men - will soon go and evict these germans from their homes while they will squat simply because the cold and hunger. Germany can not sustain the financial burden brought about all these muslims who continue their trip to Germany. Clearly - germans being brainwashed into cowards due to 'PC' won't respond as well as simply out of fear of losing their heads.

Reading german blogs/media one learns about the rampant rapes of german women by these muslims men - allowed by their Koran.
German police also participates in the german subversion of their citizens doing nothing while the hundreds of crimes are underway - following the socialists orders.

Germany is in distress although east german communist Angela Merkel does not care because being praised by her compatriots is sufficient.

The socialist's goal is chaos - their mission statement is : "Out of chaos come order"!

Hopefully americans pay attention to the unfolding chaos in Germany and don't allow themselves to be victims of these monsters 'planned' scheme; average citizens or nationalists are those targeted for elimination if necessary - we are considered 'expendable and collateral damage'!

I forgot to add to my comment this: German intelligence services have intercepted numerous truckloads of weapons originating in Turkey destined for Germany. There is no question that many trucks were successful in arriving at their destination!