CHART: Only 4 Left in the GOP Presidential Primary

Support for Texas Sen. Ted Cruz has surged among Iowa Republicans, a new poll shows, suggesting his effort to sew up support among influential evangelical Christians in the first-in-the-nation caucus state has borne fruit.

¡Jeb! Bush dropped from a meager 5% in October to an abysmal 4% in the state.

More broadly, looking at the Real Clear Politics averages, the field appears to have narrowed itself down to four.

While they may not have called it quits officially yet, ¡Jeb!, Carly, Huck, Crispy Creme, John "Get off my lawn" Kasich, Rand Paul, Lindsey Graham, Pataki (no idea what his first name is) are effectively non-entities. 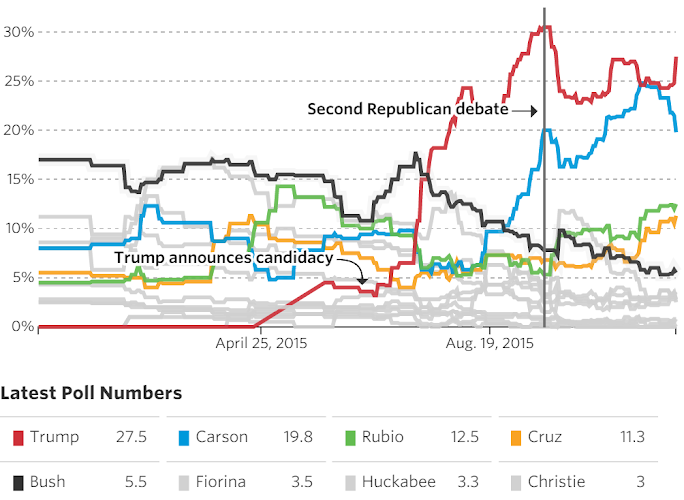 Which explains the emails I'm receiving of late from the GOP establishment's favorite also-ran:

Kasich, a guy who is a complete zero when it comes to the GOP primary, now serves the role of a GOPe proxy, trying to breath life into the carcass that is the mummified remains of the Bush candidacy.

The PAC supporting GOP presidential candidate Ohio Gov. John Kasich – who is ranked ninth out of the GOP field – is beefing up attacks against GOP frontrunner Donald Trump with ads airing in Ohio and New Hampshire... It also hatched a plan to disrupt Trump’s rally in Ohio on Monday night by flying a plane over the event that read, “Ohioans Can’t Trust Trump.”

...Trump’s campaign manager Corey Lewandowski, laughed off the campaign attacks in a previous interview with The Hill, “where he jokingly questioned whether Kasich is still in the presidential race.”

I have come to the sad conclusion that the GOP establishment seeks a Hillary Clinton presidency. Their insane backing of an unelectable doofus like Jeb Bush makes that clear. For Republican insiders (which you can read as: The Chamber of Commerce), a Hillary vs. Bush matchup was certain to result in a President Pantsuit.

All of this confirms the necessity for outsiders like Trump and Cruz to stay in the GOP so that they crush its defective leadership like the cockroaches they are.