LOSING THE PRIMARY TO WIN THE GENERAL? Why ¡Jeb’s failed campaign hasn’t called it quits

It was a puzzling statement for sure when Jeb Bush said early on in his run for president that Republicans need to stop trying to win the argument, and that he would rather lose the primary in order to win the general.

Many, including me, asked just how it is possible to lose the primary but go on to win in the general, a race determined by who wins the Republican primary.

But now that Jeb has thoroughly botched the debates, and fallen far short of getting enough momentum before Iowa to be considered in contention for winning the primary, shouldn’t we ask whether he is simply following through with his stated goal?

In an article at The Hill, a seemingly unimportant endorsement for president came from Michigan first-term Republican Congressman Mike Bishop.  With Bush being out of the general news cycle, and establishment operatives publicly claiming they are actively engaging in demolishing Donald Trump’s run, perhaps a silent campaign to try to throw a wrench in the works is being fought on behalf of Jeb, while he sits in wait to secure the nomination at the convention.

Now that Jeb has fallen far short of getting enough momentum before Iowa to be considered in contention for winning the primary, shouldn’t we ask whether he is simply following through with his stated goal? 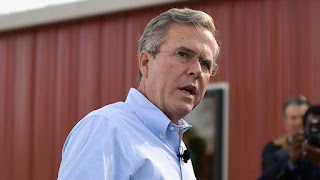 For many years, the endorsement of a Republican from Congress gave the candidate meaningful gravitas, but this year is by all measures very different.

But the difference is not necessarily recognized by the, as Sarah Palin would call it, “good ol’ boys club.”

As the polling continues to favor Donald Trump, and certain factors have increased or decreased other candidates’ numbers, it has become routine to accept that Jeb Bush is out of the running.  But I would caution every liberty-loving American watching this process that this is not necessarily the case.

As the days pass, I don’t think it will be surprising to see more and more congressional representatives back Bush.  As the primaries draw near, it is conceivable that Bush will use his large amounts of money to make his case for the loyal GOP voters who populate the Republican Parties in the states. Primaries have notoriously low turnout, so those who are involved in the party system and loyally take orders from the establishment are Bush’s base.

These folks detest chaos, detest conservatives, and though their own rules bar them from backing a candidate in the primary, in the end, the practice will be widespread as usual, so you can be sure that the familiar name of Bush will draw most, and through that cronyism, have a formidable ground force.

At this time, Republican machines in each state are gearing up once again to promote a moderate squish.

Perhaps some would say that there is no catching Trump, but again I would caution that Trump’s voters are not necessarily Republicans, or at least connected in meaningful ways with the Republican Parties in the states.  Many are disaffected Democrats, completely bewildered tea partiers out to destroy the current state of the GOP, and others just seem to want to vote for a guy who they see not as politician but a very successful household name.  But Trump will have to convince these folks to go out in the spring, pick up a Republican ballot, and vote for him, and it seems to me, without an effective primary ground game populated by people who know how the GOP operates, Trump might find that his big numbers now might not be reflected at primary time.

At this time, Republican machines in each state are gearing up once again to promote a moderate squish.  Kasich, the epitome of a moderate squish, is the governor of the state where the convention is held.  The latest Trump showing in Ohio is probably consuming Kasich’s every thought.  He obviously will stop at nothing to impede an outsider candidate, and I would caution not to underestimate the influence of the governor, the Ohio machine which includes an ousted Speaker of the House, nor the “brothers in arms” of big government.

One of those brothers is Karl Rove.  His famous meltdown in 2012 over the results in Ohio has every beltway cog convinced that a Republican cannot win the nomination without that state.  Rove has been said to personally dislike Jeb, but when push comes to shove, Rove will always be there to perpetuate the cronyism, amnesty, and debt of the previous Bush administration.

Jeb went down in flames after the last debate.   His burn rate was astronomical, prompting him to cut back on staff.  His strange comments about killing baby Hitler, his inability to make a statement with fluidity, and his silly “fix it” campaign dropped his numbers.  He was ridiculed by those you would think would stand by him, but the fact that he is still out there, asking for and receiving endorsements from congressmen, and staying quite under the radar, make me wonder if his strange strategy is still underway.

On the other hand, if Jeb’s “losing the primary to win the general” just means that he would be mollified if another moderate squish with the same intentions on immigration won the nomination, we should all keep a close eye on Rubio, who simply parrots Bush’s stances on immigration in a different package.

The following needs to be read and understood by anyone registered as an Independent and you want to vote for Cruz, Trump or Carson: