THE COLLAPSE: Universities No Longer Even Pretending to be Institutions of Higher Learning

Students at several universities have been protesting over some legitimate, and even some illegitimate, grievances and “injustices” recently. In unsurprisingly duplicitous fashion, they have engaged in the same type of tactics they denounce: bullying, intimidation, and bigotry, in what should be the most open and diverse setting – institutions of higher learning.

At the University of Missouri, there was a report of a swastika of human excrement on a wall in a lavatory. Surprisingly, in this era of everyone having a cell phone that takes pictures, not a soul on a campus of 30,000 students was able to document it. Then apparently some inebriated student said some inappropriate things of a racial nature. He was suspended. So basically, a couple of incidents of bad behavior.

Primarily because of those incidents, protests broke out all over the campus, even leading a communications professor to request some muscle to prevent a student newspaper reporter from taking pictures. Isn’t that interesting, that a professor of communications, you know, that industry that is so dependent upon First Amendment rights, would attempt to suppress and stifle the First Amendment rights of others? 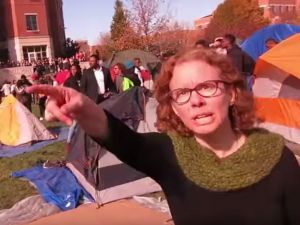 To the modern day witch hunters of Mizzou “racial insensitivity” is the hammer, and literally anything can be a nail, because it’s so completely subjective. Failure to display enough revulsion at perceived injustices is apparently enough to be classified as “racial insensitivity,” as the removal of the president and chancellor prove.

But because of the demonstrations, and the football team getting involved by threatening to not play BYU this weekend, the campus bullies forced their way past logic, to the very highest echelons of university governance. The university president and chancellor resigned. Even they refused to be the adults in the room. No wonder the students act the way they do!

There is at least one small glimmer of hope with regard to the Mizzou situation. Sci Martin, one of the nation’s top defensive ends in the upcoming recruiting class, has cut Missouri from the list of schools he was considering attending and playing football for. Martin leads the New Orleans area schools in quarterback sacks, says he wants “no part of what’s taking place” at Missouri. “Their campus is going out of control,” the athlete said earlier this week, and “I’m not going back in time with this type of madness.” There are, gratefully, some millennials who have not totally divorced reality!

The vice president of the Missouri Student Association was on MSNBC earlier this week expressing her disdain at “people using their First Amendment rights to create a hostile and unsafe learning environment.” She called for a “safe space for healing rather than experiencing a lot of hate.” This is so sad on so many levels! Not least of all, the notion to some that freedom of speech can be suspended to create a “safe zone” so hypersensitive adolescents don’t get their feelings hurt.

MSNBC host Thomas Roberts asked the student leader what she thought of one professor who complained that college campuses are becoming places of prohibition. She responded, “I personally am tired of hearing that first amendment rights protect students when they are creating a hostile and unsafe learning environment for myself and for other students here. I think that it’s important for us to create that distinction and create a space where we can all learn from one another and start to create a place of healing rather than a place where we are experiencing a lot of hate like we have in the past.” Are there really classes that teach this kind of inanity? No wonder so many of them are so cognitively dysfunctional.

It is truly unfortunate that some choose to use their freedom of speech to promote hate and ignorance. But someone’s supposed “right” to not be offended doesn’t trump the right to free speech! If we attempted to revoke freedom every time it was used to do something politically incorrect, we’d quickly run out of freedom.

Next stop, Yale University. The week before Halloween, some students complained to a professor and his wife, who also serve as residential advisors, that the university was being “heavy-handed” on what Halloween costumes should be avoided, for the sake of “racial sensitivity.” The couple drew from their scholarship and experience and wrote a thoughtful email inviting the community to consider whether it was appropriate to have “PC police for Halloween costumes,” from an intellectual perspective. One source described the email as the “model of relevant, thoughtful, civil engagement.”

For simply having raised the possibility that people should think about the issue rather than simply blindly following the PC dogma, the couple have become the targets of the most pernicious and vile attacks. An all-out public verbal flogging has ensued, to force them from their positions with the university. I guess we can finally relinquish the notion that the Ivy League proffers a superior education.

Wesleyan University in September cut half of the student newspaper funding from the student association because of complaints about a column critical of the “Black Lives Matter” movement. Bryan Stascavage, an Iraq War veteran, wrote the piece that was not critical of the movement’s mission, or even their motivation, but questioned their tactics, especially the “anti-cop” fringe elements of the movement.

As one source described the piece, it “contained neither name-calling nor racial stereotypes, the usual hallmarks of collegiate column calumny.” It was a thoughtful, deliberative column. But that didn’t prevent all hell from breaking loose, and Stascavage excoriated and denounced everywhere he went on campus. In a café on campus, one student screamed that he had, “stripped all agency away from her, made her feel like not a human anymore.” And just like at Mizzou, no adults showed up to render order from the vapid chaos because they are afraid to. And perhaps justifiably so, as standing up would likely cost them their jobs.

The irreverent, and almost always politically incorrect South Park, in one of their October episodes, mocked the current PC climate on American universities. In a song titled, “In My Safe Place,” reality-dimension-challenged college students sang quixotically about their “safe place” where they don’t ever have to hear, see, or be confronted with anything that may challenge their biases and predispositions. That is until the villain, identified as “Reality,” steps into their “safe place” and begins dismantling their ideological fantasy.

Regrettably, it seems that most of higher education’s commitment to diversity is entirely misplaced. The culture at too many of these institutions sacrifices what should matter most, in favor of what matters least. After all, is there anything that matters less than what color one’s skin is? And conversely, is there anything that matters more in a university setting than ideas? Yet academe has nearly universally substituted those priorities. The pervasive commitment to diversity is all about skin tone, and diversity of ideas and perspectives is maligned, vilified, and proscribed anathema.

Rather than institutions of higher learning, it appears all too many schools are becoming institutions of lower learning. Instead of preparing the latest generation of students for reality, and to be productive members of society, they’ve become incubators for narcissism, egocentrism, confirmation bias, and a whole new breed of thin-skinned, coddled, entitled, and spoiled brats.

And this is all occurring in an era when they are accountable for the expenses of their “education.” Imagine how much worse they’d be if taxpayers paid all of it for them! There is much to fear for the future of civilization and our society given the devolvement of our “higher education” culture. Gratefully, our own Idaho State University has withstood this trend thus far.

They are becoming day care centers producing products with a comprehension of reality that is barely suitable for entering the first grade. The new reality is perceived to be MTV and the Kardashians where the plan: I don't know who I am or where I am going or how to get there is suppose to be entertaining.

"Then apparently some inebriated student said some inappropriate things of a racial nature. He was suspended"...