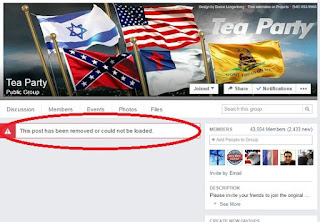 Author and speaker Trevor Loudon revealed Sanders’ radical ties in a short film he released Wednesday in anticipation of his upcoming political documentary The Enemies Within which seeks to expose the anti-American radicals in the federal government.

After several prominent Facebook pages posted the article, the link was blocked at numerous pages (See here and here for just two examples) and Facebook “likes” on the actual article became “stuck” at 572.

It is pure speculation at this point as to why Facebook blocked the article. At the time of this writing, Facebook has not replied to requests for clarification.

Watch the video that Facebook evidently does not want you to see HERE.

It's sickening to see the candidates the democrat Party have seen fit to run for president-absolutely sickening. To think they have ~45% of the vote in their pocket should tell you how close we are to the end.

And WTF is wrong with Vermont? Lord.
MM

This is not surprising - after all Zuckerberg is a progressive and belongs to the far left. When you take a look at his affiliations and his 'charitable' side - he has a lot in common with Sanders, Clinton, Obama and the rest of this elitists.

This author who made this film is the same one who exposed the communist who are currently in office in DC which numbers in the 85+. He provides great research results while keeping his integrity.
Long ago - McCarthy was exactly right when he suspected the communist infiltration in DC. As a matter of fact - communist affiliations and infiltration goes back to the Kennedy's with Ted Kennedy actively working against the presidency of Ronald Reagan involving and asking help from the KGB to destroy that possibility. He was not successful.

McCarthy did not get the respect he deserved nor did the truth get any further since - the government is still filled with communist agents. One of our Californians - Barbara Lee - is one of them.