Yes, Virginia, There is a Recession

Despite the bogus BLS employment report last week (so the Fed could raise rates before the next financial crisis hits), all economic data confirms an economic recession. Corporate profits are falling, and their forecasts for next quarter are worse. Global trade is slowing dramatically. Oil prices and other commodities are plummeting to multi-year lows. Manufacturing and Services surveys are flashing red. China, Japan and European economies continue to suck wind. Layoff announcements by major corporations are up 40% over last year. A global deflationary recession is underway. Only a CNBC bimbo, shill or Ivy League educated economist isn’t bright enough to see it.

Retail sales came out this morning and they were worse than dreadful.

They confirmed the horrific quarterly reports from Macy’s, Nordstrom’s, and Kohl’s. Total retail sales grew a minuscule 0.1% from September and only 1.7% versus last year. It’s even worse than it looks. When you back out the subprime auto loan spurred auto sales (long term rentals), retail sales grew only 0.5% over last year. That is far less than true inflation, so on a real basis retail sales are FALLING like a rock. This only happens during recessions. And it isn’t a one month thing. Retail sales, even including loan boosted auto sales, are flat over the last three months and up only 2.1% for the first 10 months of the year. 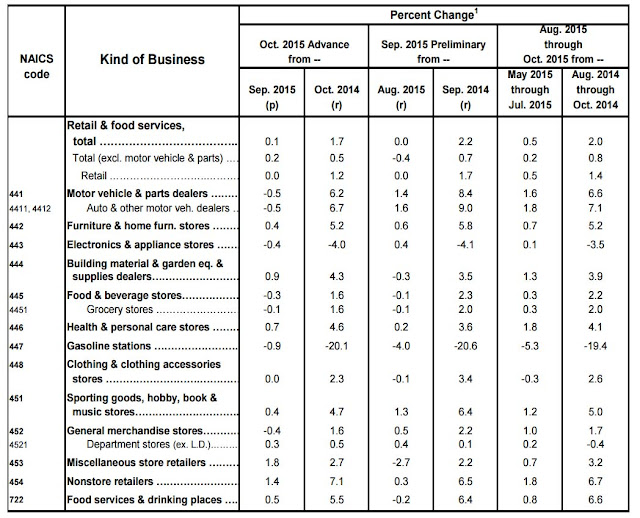 The decline in gasoline sales due to plunging prices has contributed to the lousy retail sales numbers, but the storyline of the economic bulls was how this was going to boost the spending of consumers across the board. That storyline is as dead as an Obamacare patient. It seems all the gasoline savings immediately went to pay for the soaring cost of Obamacare, even though the BLS says there is no healthcare inflation. There are a few areas that jump out at me and paint an even darker picture:

Lastly, one final chart to show even the most brainless twit on CNBC that we are presently in a recession, despite the rhetoric and propaganda being spewed by the dying legacy media. Look closely at where retail sales peaked and began to fall. Quantitative easing stopped on October 29, 2014. Shockingly, retail sales began falling and haven’t stopped. The trillions of fiat printed since 2008 has solved nothing.

Doctor Bernanke and doctor Yellen injected a massive dose of adrenaline into a patient with cancer. The patient showed the appearance of recovery, but the cancer has metastasized and spread through the entire system. Competent doctors would have cut the cancer out by allowing bankrupt banks to liquidate and purging the system of cancerous debt. Instead they took steps to promote the proliferation and spread of the cancerous debt. Now the ptient is terminal. 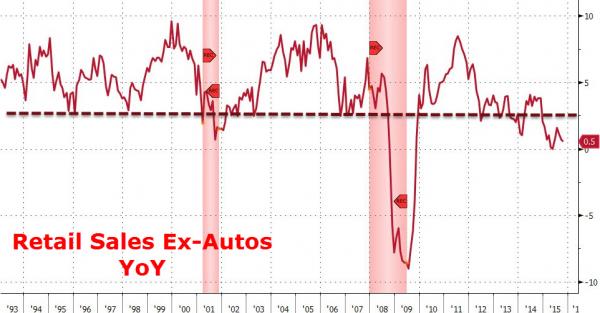 It's a freaking nightmare
MM