Make sure you're sitting down before you read the next sentence:

Who could have predicted such a catastrophic failure on the part of DMV-care?

First, the administration revealed that enrollments for Obamacare next year will barely hit 10 million, far below previous projections. 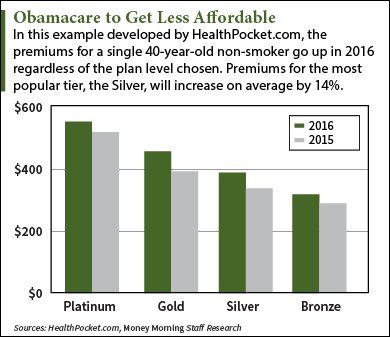 Then last week, the consulting firm of McKinsey & Company estimated that premiums for policies under the Affordable Care Act, also known as Obamacare, were going up substantially in 2016. For instance, the median rate increase for the lowest priced, highly popular “Silver” plan will rise by 11 percent – compared to just a seven percent increase in 2015.

Now there are troubling reports that consumers will be facing soaring out-of-pocket costs for deductibles next year – increases that in many cases will neutralize the benefits of their health care plans or discourage some from purchasing coverage.

“That these deductibles are so high is clearly one of the reasons people aren’t buying a plan—they simply don’t see themselves getting anything for the money,” Robert Laszewski, president of Health Policy & Strategy Associates, a business and policy consultant, said in a newsletter on Monday.

Which is why, well before Obamacare passed in 2010 through the sleaziest process imaginable, I published my exclusive ObamaCare™ Trading Cards, so you can track who really benefits from a government takeover of the health care system.

It was never about health care. It was about control.

I read your article online and I just wanted to share a thought with you. I am with United Health Advisors. A lot of people are choosing to go without insurance because the deductibles are too high. Like you said, if you are not near poverty level, Obamacare is very difficult if not impossible to pay for. It isn’t helping people who make a reasonable amount each year. There are some on the cusp as well, some people make just enough to only get a minimal subsidy and they still have a $500 deductible. Even that can stand in the way of care, when the premium you are paying each month is money that you didn’t actually have above and beyond your need for bills. Not many people are aware of the opportunity for private health insurance. Some people can’t afford anything at all, but others would save quite a bit with private health insurance. There is no deductible, so they get first dollar coverage, and the premiums tend to be lower than the ACA plans.
The tax penalty is still an issue, but how much money have you saved over the course of the year with a lesser premium and no deductible? And, in the case of United Health Groups Premium Choice plan, there is a CPA assigned to each member. The CPA sets up an HR 105 for small businesses and for individuals who want to get all of their medical costs for the year on one line of their schedule C. When this is done, everything that you pay for your medical care, out of pocket, is added to the amounts you have paid every month on your premiums. Sometimes the amount written off completely offsets the penalty and other times it simply reduces it.With the small businesses, they can allocate a certain amount of the budget for medical care to each individual employee and the private health care plans are built for that specific individual employees needs. In this way, the small business can work within a reasonable budget and then seek to offset their penalty costs at the end of the year. I don't handle the tax end of things, but I know that the HR105 specialists in the company are here for that express purpose. Helping small businesses and entrepreneurs develop a plan that is suitable for their budgetary needs and then offsetting their penalty as much as possible at the end of the year.

People don’t realize that private health insurance is there for them now, so that they have affordable coverage now. You have to be reasonably healthy to get into this pool of reasonable healthy people. That’s the catch. That’s how they manage to keep their costs down. You have to go through underwriting and they check your MIB report to see what kinds of issues you have had in the past. They make accommodation for many things, sometimes they will include a rider addressing a specific issue and refusing to cover that issue for a certain period of time, or at a certain percent. Some conditions are simply declined out of hand. It’s easy to get a preliminary underwriting assessment if there is doubt whether your condition would be insurable with private health care.

Anyway, I just wanted to let you know if you didn’t, that private health care is a great way to go if your deductibles are too high and you are considering not having insurance at all. Either way you will have a penalty, but in this case, you have great, rich coverage throughout the year and an opportunity to use a CPA’s help in offsetting that penalty at the end of the year.

The sad thing about high deductibles is that a very small portion of medical claims are above $5,000. I will be sticking with private health insurance and that’s what I enjoy helping people with. You would not believe how rewarding a product like this is in times like these. I love my job, especially right now.

Have a great Thanksgiving.
Amy Rosebush