AMERICAN FASCISM: Call The Campus Protests What They Are

The racist, McCarthyite, totalitarian movement rearing its ugly head on college campuses as diverse as Missouri, Yale and Vanderbilt is being treated by conservatives as a case of kids too fragile to handle views with which they disagree.

This may work as a debating tactic but it misunderstands both the malignancy of the politics behind the campaign and the ferocity of its radical leaders.

Now they are calling for the heads of liberals (and getting them). But quaint American prejudices like the First Amendment still stand in their way. But for how long? If this movement, which includes large contingents of the Democratic Party – including the president, achieves critical mass and succeeds in its agendas and acquires the necessary power, who can doubt that they will be putting dissenters in prison and worse?

These are people intoxicated with their own virtue, and determined to purge non-believers in their path. They are a perfect analogue to the Islamic fanatics who want to purify the planet. While the Islamic fanatics be-head, the American fanatics suppress and burn. At bottom, they see the world in parallel terms: Slay the infidels wherever you find them. 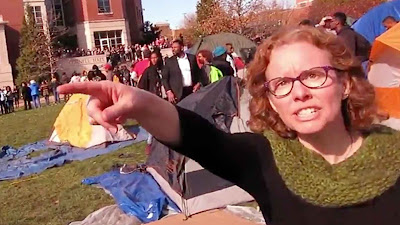 The current eruptions on college campuses, which will be escalating through this year, are the product of four decades of capitulations to leftwing racism and political correctness, which is a totalitarian party line whose inventor Mao Zedong murdered 70 million Chinese in its name.

America still has strong traditions of intellectual pluralism and individual rights, which are obstacles in the way of the progressive storm troopers, but for how long?

How many capitulations by so-called liberals, how many unconstitutional executive orders, how many coercions by Democrat-controlled government agencies before there are no obstacles left?

We saw these lynch mobs first hand in Ferguson, but only an inaudible few were willing to name them for what they were. In Ferguson, the president of the United States supported the lynchers, along with the Democratic Party and the leftwing chorus. And so it spread to New York and Baltimore and now Missouri and Yale. The time has come to call this for what it is, an American fascism.  But the time is also getting late to reverse the tide.