CRUZ BLITZES EPA EMISSIONS PLAN: "Our founders would have recognized [this] as tyranny"

The Environmental Protection Agency’s new regulation, known as the Clean Power Plan, was finalized last month and immediately challenged in court by 26 states and an array of companies and associations in the energy industry.

“The regulation is neither clean nor does it have anything to do with power, other than the Obama Administration’s power to harm our energy production,” Cruz, a Republican, said in a taped message.

“The CPP would, by the admission of its own proponents, reduce the effects of climate change by an infinitesimal amount a century from now.”

As the states have historically regulated their own power grids, Cruz called the plan a “power grab” by the federal government “our founders would have recognized as tyranny.” 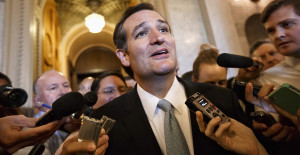 “Just bypass the Railroad Commissions, bypass the states. Bypass the Senate, the House, and the U.S. Constitution and put the EPA in charge of whether that woman and that child on fixed income are going to be able to have affordable electricity,” Murray said.

A study by NERA Economic Consulting published this month estimates CPP compliance costs nationwide will be as high as $39 billion a year. In Texas, electric rates could increase by as much as 21 percent, the study found.

That’s less expensive than earlier versions of the rule, but the rule would still be five times as expensive as every other EPA regulation on power plants combined, the study found.

“It’s going to have a tremendous impact on electricity prices,” Paxton told the audience at the At the Crossroads Energy & Climate Policy Summit. The CPP lawsuit is one of six Paxton’s office has filed against the Obama administration.

In July, the Supreme Court struck down the previous record-holder for most expensive EPA energy regulation, a rule on mercury widely seen as a backdoor means of regulating particulate emissions. The court ruled the EPA improperly failed to consider the cost of its rule early in the process.

The ruling came too late to save the industry, according to Murray, who sued the EPA over the mercury rule.

“I won, but I didn’t win anything, because (Obama) had already closed 411 coal power plants,” Murray said.

However, he said, the EPA made the same mistake in the current process.

The EPA defends the Clean Power Plan by arguing it will result in 180,000 fewer missed school days by children due to ozone-related illnesses by 2030, and that smog will contribute to somewhere between 2,700 and 6,200 fewer premature deaths by 2030.

President Obama famously promised, during his first presidential campaign, to bankrupt coal investors. U.S. coal production has dropped 15 percent since 2008, due both to regulatory pressures and to competition from natural gas, which has been at historic low prices.

“As a whole, the industry is bankrupt,” Murray said. “We’re $45 billion short of what we need to pay our debts.”