Sen. Marco Rubio (R-FL) is defending his controversial co-authorship of the 2013 “Gang of Eight” amnesty bill. Rubio also suggested that while it defies the “majority position” of Republicans, he would plow ahead with his plan to provide green cards to illegal immigrants—a central plank of his Obama-backed bill.


In an interview with Sean Hannity, Rubio declared, “Now the majority position in our party is it should stop at just a work permit… I personally am open to allowing people to apply for a green card.”

Rubio admitted that he is at odds with the Republican voters on this issue, stating, “That is not a majority position in my party.”

Indeed, according to Kellyanne Conway, more than two-thirds of all voters think illegals should be encouraged to go home by cutting off jobs and benefits. 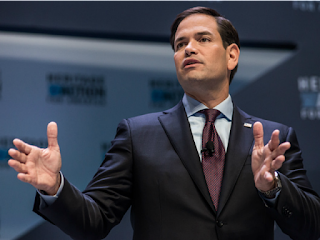 However, in yesterday’s interview Rubio went a step further in defending his involvement in the Gang of Eight immigration expansion plan—effectively confirming the recent assertion of Sen. Chuck Schumer who said that Rubio’s “fingerprints are all over that bill.”

Rubio defended his handiwork claiming, “I was trying to produce the most conservative bill possible in a Senate controlled by Democrats and had hoped a more conservative House would make it even better.”

This line of argument, however, is likely to open Rubio up to substantial criticism, since critics of the 1,200 page bill have argued that his 2013 immigration expansion bill was substantially more progressive than the 2007 McCain-Kennedy bill, which a number of Democrats opposed.

According to the Center for Immigration Studies, Rubio’s “conservative” bill would have added four times more new foreign workers than the rejected 2007 McCain-Kennedy bill, and also would have added 33 million new immigrants on green cards in the span of a single decade.

Despite Rubio’s repeated public assurances about border security, Schumer crowed about the amnesty-first legislation. As Schumer explained, “on day one of our bill, the people here without status who are not criminals or security risks will be able to live and work here legally… Immediately when the bill passes, people who are here living in the shadows would get a legal right to stay here and work.”

As ICE union president Chris Crane explained, Rubio’s bill would also, “provide instant legalization and a path to citizenship to gang members and other dangerous criminal aliens, and handcuff ICE officers from enforcing immigration laws in the future.” Crane wrote:

Senator Rubio left unchanged legislation that he himself admitted to us in private was detrimentally flawed and must be changed… Legislation written behind closed doors by handpicked special interest groups which put their political agendas and financial gains before sound and effective law and the welfare and safety of the American public.

Reports from The New Yorker, National Review, The Washington Post, The Tampa Bay Times and many others have all confirmed that Rubio played an essential role as the salesman for Barack Obama’s immigration bill. As Bob Menendez told The New Yorker, Rubio was essential to the Gang of Eight, as it was his job to “neutralize” the opposition of conservative opinion makers and in some cases “proselytize them” to push Obama’s progressive bill through the Senate.

Indeed, it was on Hannity’s very program that Rubio declared that no amnesty would take place under the border was secured.

Prompting Hannity to ask, “Are you telling conservatives then to be patient with you? That the bill is not finished and maybe they’ve read too much into it too early?”

But Senator Rubio voted against an amendment that would have added an entry-exit tracking system to the bill, and the final bill did not include an immediate E-Verify program. As the Washington Times reported:

Heading into the [recent] debate, Mr. Rubio said he wanted significant changes, including to border security, to the entry-exit system to check visitors’ visas, and to the requirement that newly legalized immigrants show they have learned English before they earn green cards. Mr. Rubio called the English-language loophole ‘one of the bill’s shortcomings’ and vowed to fix it, and even wrote an amendment to require immigrants to prove English skills, rather than merely sign up for classes, which under the bill is considered acceptable. The Senate never considered that, nor Mr. Rubio’s other amendment to modify eligibility for the Dream Act. The Senate also ignored the list of nearly two-dozen changes Mr. Rubio’s office floated ahead of the debate in a three-page document designed to point out potential flaws and solutions to the bill.

As Crane wrote, the resulting bill was even worse: “Senator Rubio, who promised ICE officers and Sheriffs that he would take steps to repair the bill’s provisions that gut interior enforcement, has abandoned that commitment. He directly misled law enforcement officers.” Then-President of the USCIS council Ken Palinkas declared that the revised bill would, “exacerbate USCIS concerns about threats to national security and public safety.” Palinkas said that Rubio’s legislation, “was deliberately designed to undermine the integrity of our lawful immigration system.”

In last night’s interview, Rubio told Hannity, “What we underestimated is how much people distrust the federal government… It’s not enough to just pass a law that says, ‘We’re [going to] build a wall.’ They want you to actually build the wall, and then they’ll let you move forward on the other things.”

However, in 2013 Rubio voted against an amendment that would have added a double-layer fence to the border.

As it stands now, Senator Rubio is continuing to push many of the President’s core immigration priorities, including expanded refugee resettlement, a huge increase to the H-1B visa program, and a recent statement that Rubio’s “ideal” plan would be to leave the 2012 amnesty in place—which is still in full operation—until a legislative replacement can be put into effect.

This issue, along with Rubio’s prior statements endorsing the Trans-Pacific Partnership and his vote to fast-track it, may come up at tonight’s debate.

Senator Sen. Jeff Sessions (R-AL) has argued that just like no one can be the nominee who supports Obamacare, no one can be the GOP nominee who opposes GOP voters by backing amnesty and TPP. In an exclusive interview with Breitbart News Daily host Stephen K. Bannon, Sessions similarly explained, “I don’t think a Republican candidate should be running for President that says they’re for amnesty, for even more immigration, and for trade agreements that don’t serve the national interest.