I'm getting a bit tired of the mass-murders, suicide bombings, crucifixions, beheadings, civil wars, sex slaves, and mass migrations that are completely random and wholly unrelated to a certain military doctrine that purports to be a religion.

Over at France24, eyewitness accounts by law enforcement illustrate the hell that was the Bataclan Concert Hall during its invasion by terrorists.

It was like "Dante's inferno" at the Bataclan music venue in Paris where jihadist gunmen mowed down 89 rock fans within a couple of hours, one of the first police officers at the scene told AFP on Wednesday. 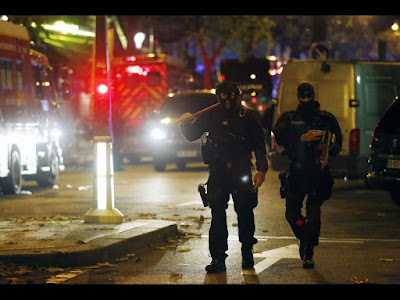 It took the first squad from the crack BRI police unit 35 minutes to reach the scene of the worst violence wreaked Friday by three teams of gunmen and suicide bombers at the national stadium, the music hall, and cafes and restaurants, the officer said.

"At 9:40 pm we got the first calls saying there were explosions at the Stade de France and shooting in central Paris," said the officer, speaking on condition of anonymity.

At 10:00 pm the first BRI team left the city's riverside headquarters in the heart of Paris "with a little equipment", setting foot in the Bataclan entrance hall in the east of the city 15 minutes later, he said.

The body of a dead jihadist was lying in the entrance, shot dead by a superintendent from the crime squad who came with his driver -- but otherwise all was quiet.

"There wasn't the sound of a single shot when we arrived," the officer said. "We wondered if the terrorists had sneaked out the back.

"We saw dead people outside on the footpath, then in the foyer. When we went inside to the main hall there were hundreds of people piled on top of each other, calling for help, there were dead people mixed with wounded people," BRI doctor Denis Safran told AFP.

"I've never seen anything like it," said the police officer. "A sea of bodies, Dante's inferno, blood everywhere, you've got no choice but to walk on bodies, you slide in pools of blood."

"There were hostages behind every door, but we had to check each time whether they were for real," he said.

The doctor added that the squad had swiftly swept the ground floor for explosives and gunmen, but found neither.

One group of police headed for the upstairs balcony while a second provided backup. France's elite RAID unit fanned out in the street and around the main hall.

"At every step we took we found hostages, hidden in false ceilings, under couches... and we had to check each time that they weren't armed and that there were no explosives," the officer said.

At 11.15 pm "we came to a door and could hear a terrorist shouting from behind it. There were two of them, they had a suicide belt and threatened to detonate it. They wanted us to step back, saying they'd decapitate hostages, and they talked about Syria."

A police negotiator tried in vain to talk to the men by phone. Then at 12:18 am the police were given orders to begin the assault.

"We opened the door and found ourselves in a hallway 15 metres (yards) long", with a group of hostages trapped between the police and the gunmen who began shooting from the other end.

"I don't know how they did it but the hostages lay down and made themselves small. We advanced under fire from the terrorists but without shooting back because of the hostages. We were behind a shield," the officer said.

"We made a human chain to slip the hostages behind us, with the shield taking the fire from the AK47s," he said, "until there were no hostages left between them and us, and then we staged the second assault."

"The shield fell, you could see a shadow, we fired, we saw the shadow crumble and then it exploded. We don't know how but the result was that the two jihadists blew up," he said.

An officer was hurt by a bullet that rebounded. It took the police an hour to make sure the premises were clear of the three gunmen.

"They blew themselves up in front of a door behind which there were around 15 hostages who didn't believe we were the police. They called (emergency number) 17 to make sure."

I blame Bush. And William Howard Taft. And Millard Fillmore.

What happened in Paris France was really devastating. How in the world people can do such brutality. I can't imagine the fear and trauma it cause the people who witnessed the attack. But anyway thanks for posting this though. Prayed for the victims and families.