As Speaker Rep. Paul Ryan (R-WI) prepares a show vote on the nation’s importation of Muslim refugees, a growing group of Congressional conservatives are calling for a reduction or suspension of visa issuances to Muslim nations with jihadist movements. 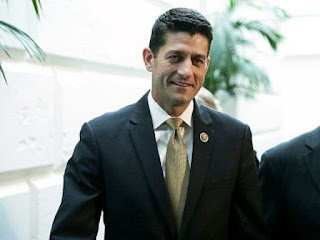 Instead of listening to their constituents and following the calls of 30 governors to shut down Islamic refugee resettlement, Republicans are about to pull the classic bait and switch: pass a phony standalone bill and decline to defund it in the budget bill… Remember Obamacare, executive amnesty, EPA regulations, and Planned Parenthood? The Islamic refugee issue is no different. They have no intention of actually stopping it, despite the fact that they could destroy the Democrats in the upcoming election on this issue alone. They will pass phony legislation, but will never defund it.

While Ryan’s decision has sparked the ire of conservatives, his decision has won the praise of Democrats like Sen. Harry Reid (D-NV) who said: “I think Speaker Ryan has the right idea… to leave any refugee legislation separate and apart from the omnibus.

Some conservative lawmakers, however, have suggested that they will not settle for a mere show-vote. In recent days, an increasing number of conservatives lawmakers have called— not just for moratorium on Muslim refugees— but for a reduction or temporary suspension of visa issuances to terror-prone nations in general.

Presidential candidate Sen. Rand Paul (R-KY), as Breitbart News has previously reported, has called for stopping visa issuances from nations that have significant jihadist movements, or roughly 30 countries. “I say from the Middle East, we don’t need any more immigrants…students or refugees or otherwise,” Paul declared on a Monday conference call with reporters.

“My message not only to the leadership, but to the country is if we want to defend ourselves, we have to defend ourselves and the first way to do it is to bar people from coming to your country who would attack you,” Paul told Breitbart. “The interesting thing about this is people are talking about world-wide war to stop this and you would think the first thing you would do is stop people from coming to our country.”

Similarly, Congressman Rep. Brian Babin (R-TX)— who led the charge on halting the importation of Muslim refugees and introduced legislation to stop refugee resettlement months before the Paris attack— expressed his support for Sen. Paul’s initiative:

I support every plan, including Senator Paul’s effort, that would protect Americans from radical jihads infiltrating this country.

Babin told Breitbart that a mere show vote from the House Speaker on this matter would not be acceptable. “The last thing we need is a show vote. As an elected official I swore an oath to protect the safety and security of the American people,” Babin declared. “We cannot allow this to happen on our watch and anything that fails to have real teeth should be rejected.”

“I would also add my take on this,” Weber said.

First of all, Jeff Sessions chairs the Subcommittee on Immigration and National Interest—they have identified 26 foreign-born individuals in the United States in the last year alone charged with and/or convicted of terrorism. That’s 26 in the last year alone. What did it take in Paris? Only eight… And let me just say, that there’s been a lot of discussion about sancturary cities. Under the adminsitration’s current foreign policy initiative of bringing in Syrian-born refugees [that we can’t vet]… we’ve already got sanctuary cities, we are in danger in America of, let’s just call it, becoming a sanctuary country if you will at this rate without being able to test the backgrounds of those individuals, and why should American citizens like Kate Steinle pay the ultimate price with their life for an ill-conceived, ill-advised immigration policy? It’s foolishness.

“I would be willing to support that,” King tsays.

I think it’s the right thing to do. We should be looking at this thing culturally. And where is all of this venom coming from? It’s coming from people who are migrating in from the Middle East and 90-something percent of them are Muslim and if you look at a map of the world on where there have been terrorist attacks, you can look around Europe and see and find people who are committing terrorist attacks, they’re almost exclusively Muslim.

According to Pew, 92 percent of the Republican electorate wants to see future immigration growth reduced. However, Congressman Rep. Raul Labrador (R-ID), who has a history of pushing to expand immigration levels, refused to answer Breitbart News’ question about whether he would support Paul’s initiative to reduce or suspend visa issuances to Muslim nations. According to Rasmussen, 65 percent of conservative voters say the correct number of refugees from all Middle Eastern countries to allow into the country is zero.

As a member of the House Freedom Caucus, Labrador played a critical role in helping to elect Paul Ryan as House Speaker. The Daily Caller‘s Matt Lewis has said that Labrador’s agreement with Paul Ryan on the issue of immigration may explain why Labrador helped install the Wisconsin Congressman with a long history of promoting large-scale immigration into the Speaker’s office.

Every year the United States admits 280,000 migrants from predominantly Muslim countries. This includes more than 100,000 migrants who were permanently resettled on green cards, more than a 100,000 temporary guest workers and students, and nearly 40,000 refugees and asylees. This means that every year the U.S. admits two Muslim migrants for every one Raul Labrador voter in Idaho’s first Congressional District. Equality Now recently issued a report documenting how, as a result of unbridled Muslim migration, half a million U.S. girls are at risk of Female Genital Mutilation. Arabic and Urdu – Pakistan’s national language– are the fastest-growing foreign languages spoken at home, according to U.S. Census data analyzed by the Center for Immigration Studies. According to a separate report based on census data, Muslim immigration is the fastest growing bloc of new immigrants.

Reports have documented how large-scale Muslim migration has posed some difficulties for assimilation.

Minnesota, for instance, which has the largest Somali population in the country, has struggled to stem terror recruiting. The Minneapolis Star Tribune recently reported that six men from Minnesota were arrested and charged attempting to fight alongside ISIS. The Star Tribune writes: “During the last two years, more than 20 Somali-Americans from Minnesota have left to fight alongside terrorists under the banner of ISIL, according to the FBI. Another four, also arrested while trying to leave, face federal prosecution in the Twin Cities under charges that they intended to fight for ISIL or the Al-Shabab terrorist brigade in Somalia.”

Similarly, as National Review has reported, “Dearborn, Michigan is home to just under 100,000 people, about 40 percent of whom are Muslim. In 2013, a leaked government document revealed that more people from Dearborn were on the federal terrorist watch list than from any other city except New York.”

Pew Research has estimated that immigration will cause the population of U.S. Muslims to more than double over the next two decades—from 2.6 million in 2010 to 6.2 million in 2030. This demographic change is almost entirely the product of legal admissions– that is, it is a formal policy of the federal government adopted by Congress.